This post is about one of my recent 3D-printing projects.

I like having plants in my apartment, but anything that requires frequent attention would have a difficult time surviving under my care. I thought cactus would be a nice fit, due to their ability to withstand periods of water scarcity—which I also respect on principle.

Here are my cactus plants in their 3d-printed pot: The one on the left, with red-tipped spines, is a Mammillaria spinosissima; the vertically-fluted one on the right is a Trichocereus grandiflorus hybrid.

I tried to optimize the 3d print for speed, without sacrificing too much quality, so I used low infill and moderate layer height settings (see here for advice on optimizing prints). Even so, the projected completion time was over 12 hours (which really illustrates some points I made here). However, as can be seen in the above photo, the print did not complete (it was supposed to be 4" in height, so I could transplant the cactus plants from the pots they came in). Partway through, my printer froze. I don't know the exact reason, but I suspect that communication between the computer and 3d printer got out of sync.

If I retry this print, I might insert an @pause command into the GCODE (after slicing) at various points, so that I have to intervene to continue the print. I'm also thinking of trying out a 3d printing service such as 3D Hubs, as this model would look great printed with a sandstone material.

Here is the model that I made for this cactus pot, by the way. Some description of how I made it is in the following sections.

(Unrelated to this post, but while I'm on the subject of 3d printing, I wanted to share this list of links related to the .stl file format, which kindly featured one of my previous posts).

The tiling pattern on the sides of the cactus pot was inspired by some Moorish tiling that I saw at the Alhambra in Grenada when I visited in 2013. The Alhambra supposedly has a comprehensive, or nearly so, collection of wallpaper groups used as decorative motifs.

Here is the picture I used as my template; I used the perspective tool in GIMP to make the view as square-on as possible. 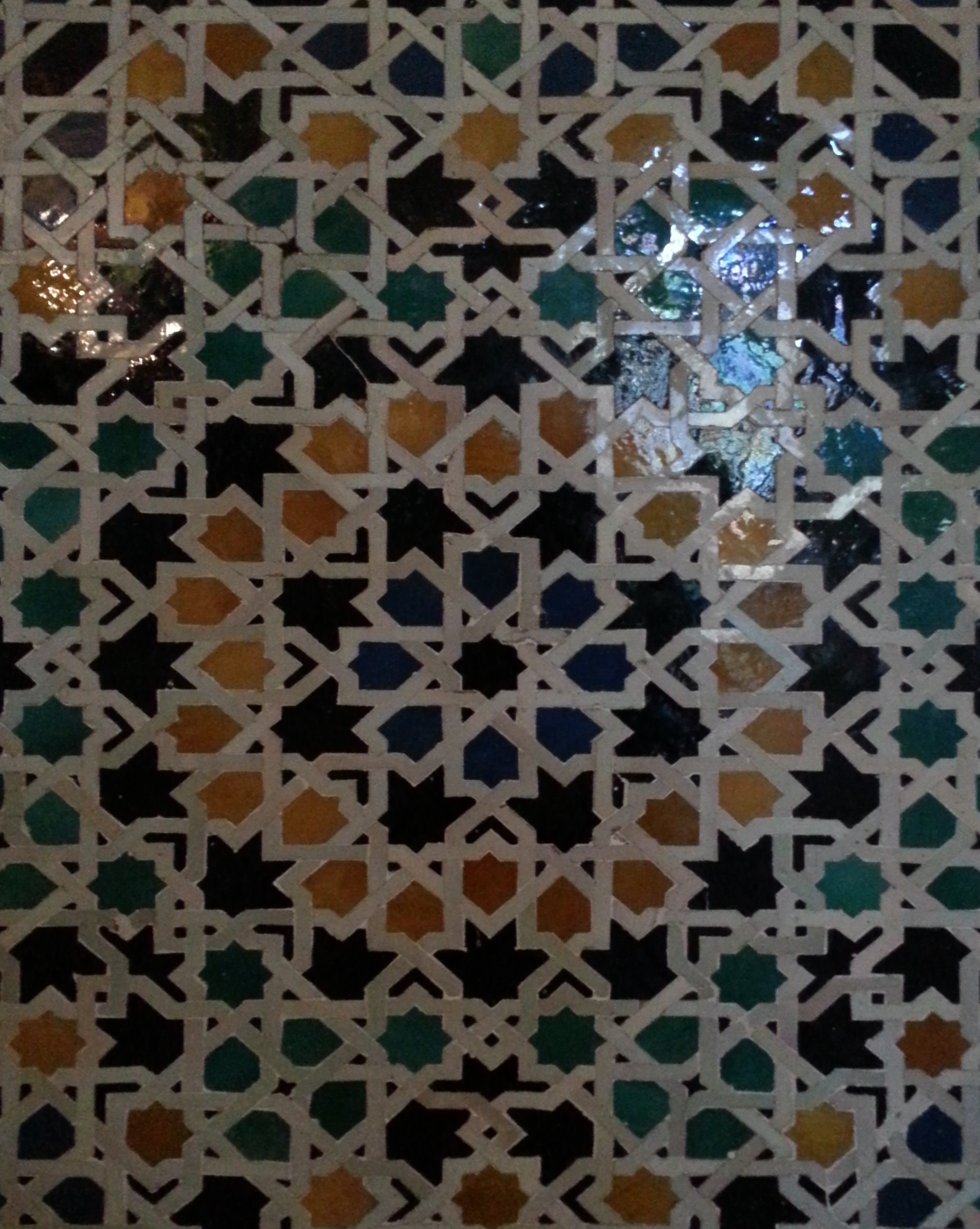 This tiling has complicated symmetry. Here are some of the shapes that repeat frequently (traced in SketchUp): 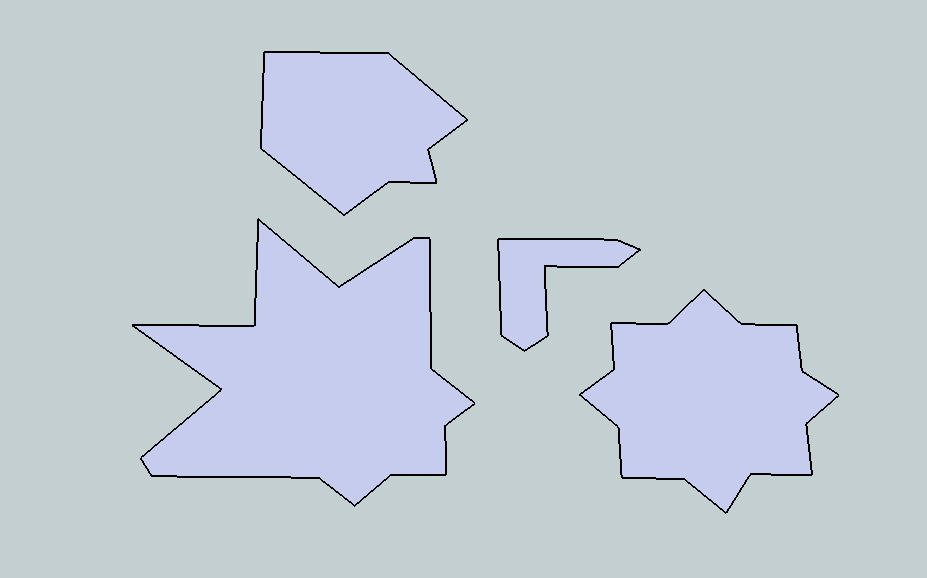 To make this design for 3d printing, I first made a box of the desired dimensions (4" high ✗ 2.5" deep ✗ 6.5" wide) in SketchUp, shown on the left in the image below. Then I imported my photo of the tiling pattern and started tracing the shapes, leaving out the very small ones to improve printability—slicing this design before printing still took a long time for the Slic3r software in RepetierHost. 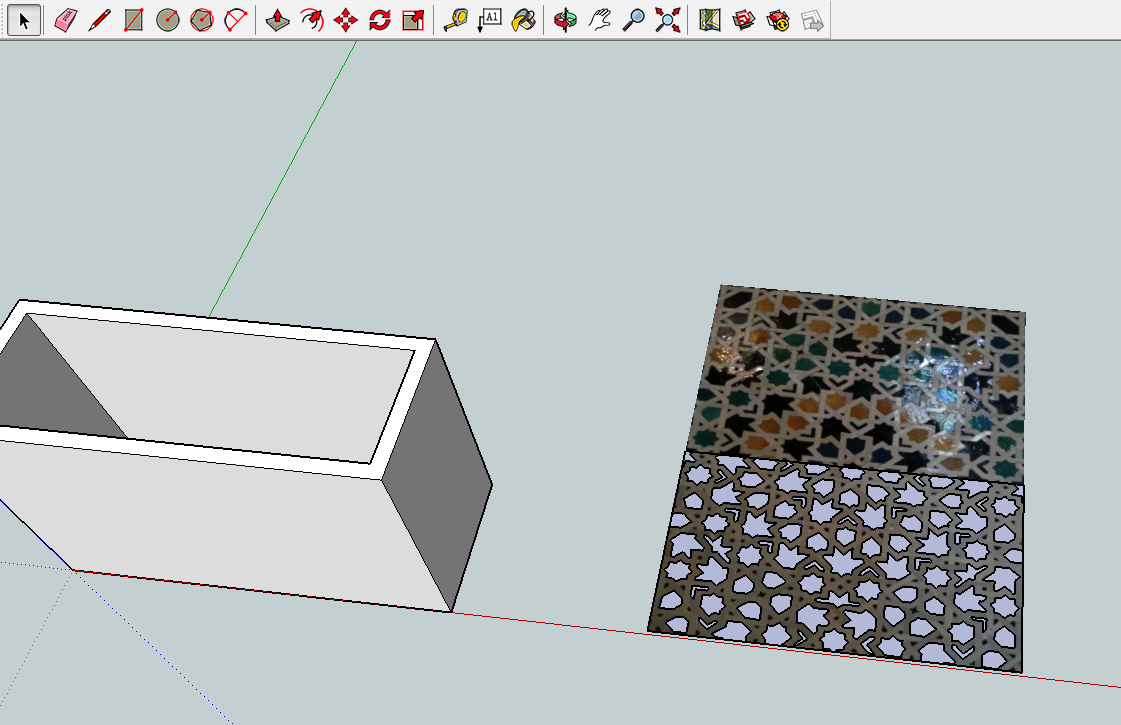 After tracing the tiling pattern, I pasted it to the front and back sides of the planter/container in SketchUp and extruded each shape in the pattern a small distance into the wall. 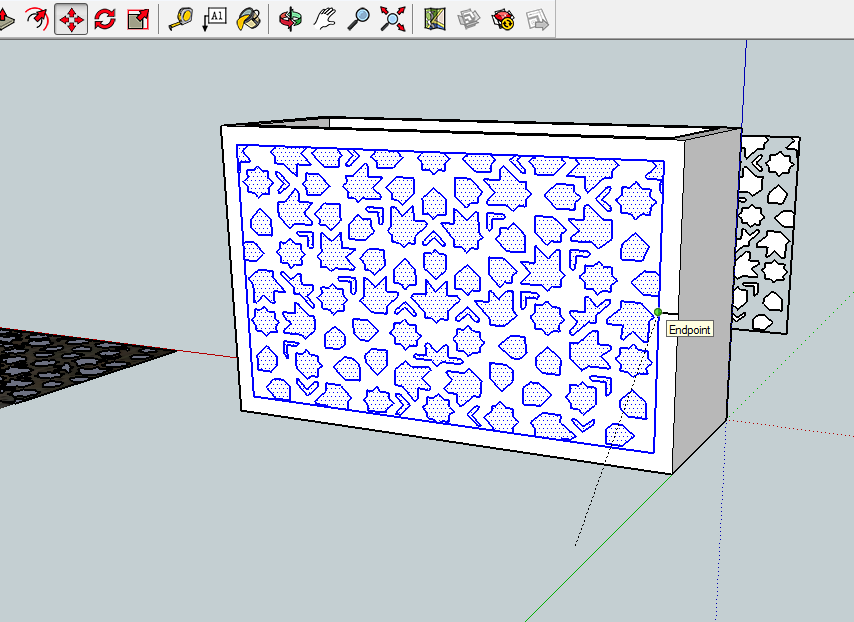