Last weekend I read the book New Brunswick: A Short History by Timothy Frink. It's a very quick read, but I still found it informative. Recently I was complaining with some friends about how history is taught in our schools and this book just drove home the point that there's a lot of interesting things that happened in this region over the past 500 years that I certainly don't remember in the curriculum. Right in the introduction, the author makes the point that for centuries, this area was on the front lines (occasionally literally so) between Natives and Europeans, French and English (even French and French at times), British and Americans. One downside to the book is that it is very Saint John-centric.

As I was reading, I made a list of some of the key events and developments in NB history that the author mentions. I've put them together in a timeline graphic for reference (Colour doesn't mean anything, it's just to make the text more readable). 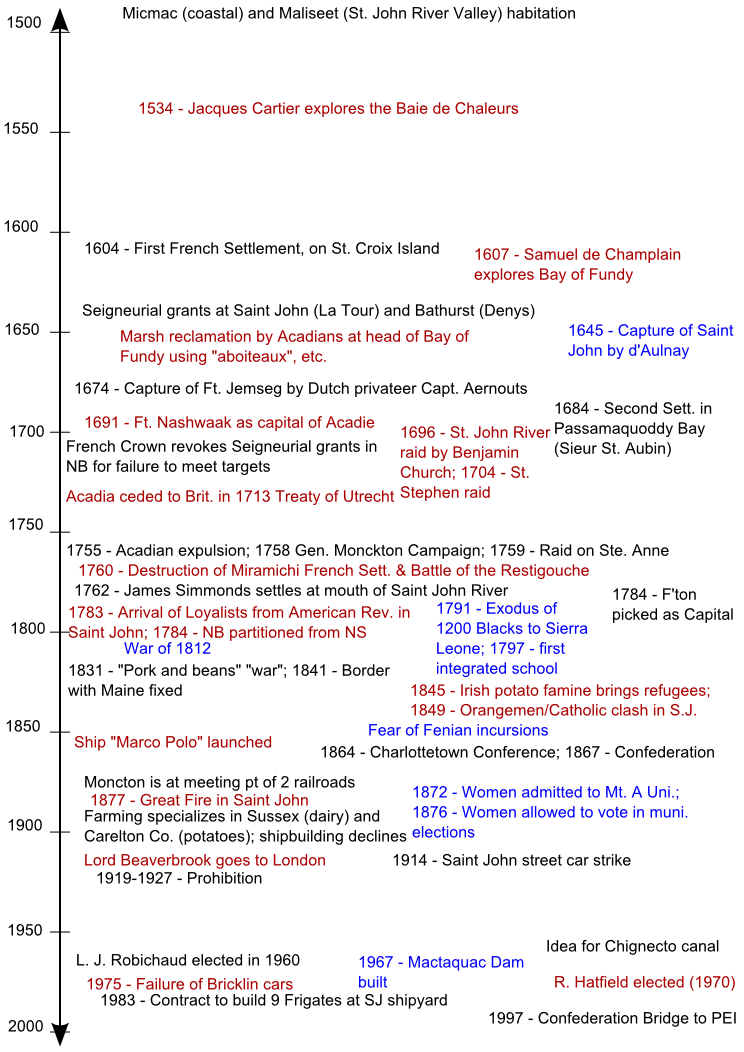 The book also had some discussion of the railroad and transportation history of the Province, which resonates with some current developments.

With rates as low as fifty percent of their competitors, the I.C.R. [Intercolonial Railroad, from Halifax to Quebec City via the North Shore of NB] was still able to show a profit; so some sort of remedial action was inevitable. In 1919, the I.C.R. was engulfed by an emerging national system. It was renamed the Canadian National Railway; its head office was moved from Moncton to Toronto; and to the best of anyone's knowledge, it has never made money since.

The freight rates were increased to central Canadian levels immediately; and then again by a further forty percent to pay for the new system's mind-numbing debt load. The effect on New Brunswick's industry was ruinous.

In 1883, the Canadian Pacific opened their 'short line' that ran from Saint John, through northern Maine, to Montreal, thus giving the port of Saint John the theoretical advantage of being served by both national rail systems. In practice, the two giants viewed competition as a very nasty word, and it never made the slightest difference. ... C.P. said they never made any money either. Much of the 'short line' has recently [this book was written in 1997] been bought by the Irving group, who are operating it under the name of the Southern New Brunswick Railway, which will make money.