I just got back from a 12-day business trip to Brazil. In this post, I'll share a bit about my experiences and impressions there.

As I was there on a business trip, my experience was quite different than if I had gone as a tourist. The weekdays were mainly filled with meetings; the photos below are all from a weekend trip to the city of São Paulo (the city where I was staying was 200 km away, but still in São Paulo (SP) state). An interesting aspect to travelling for business is that I find it gives you more exposure to the "normal" places in a country or region, and a glimpse of everyday life. My colleagues in Brazil were wonderfully generous in their hospitality. One of them showed me around São Paulo on the weekend as I'll discuss below, and I also got invited into a few Brazilian homes and family gatherings.

I didn't have to eat alone hardly at all, which was a relief because I don't know enough Portuguese to order anything interesting. As it was, I got to try lots of new and tasty things. These included Brazilian dishes such as carne-de-sol, pastéis (they have one with guava and fresh cheese called a "Romeo and Juliet"), farofa and cassava, and açaí (and other fruits). Portuguese and Italian cuisine was also readily available there, so I enjoyed some baked cod and some great pizza.

As I mentioned, one of my colleagues showed me around the city of São Paulo one weekend. It is among the biggest cities in the world and the weekend I was there was the weekend before Carnaval, so it was very bustling. The city is actually known for closing down streets for pre-Carnaval block parties ("blocos"); on Saturday night, it took two hours to drive between two places 5 km apart.

As this picture (from the roof-top patio of a hotel) shows, the city has high-rise buildings stretching farther than the eye can see.

On Saturday night, after seeing a couple of "blocos" and a flea market, we went to Parque Ibirapuera. This bridge over the lake was apparently built in homage to a Monet painting. 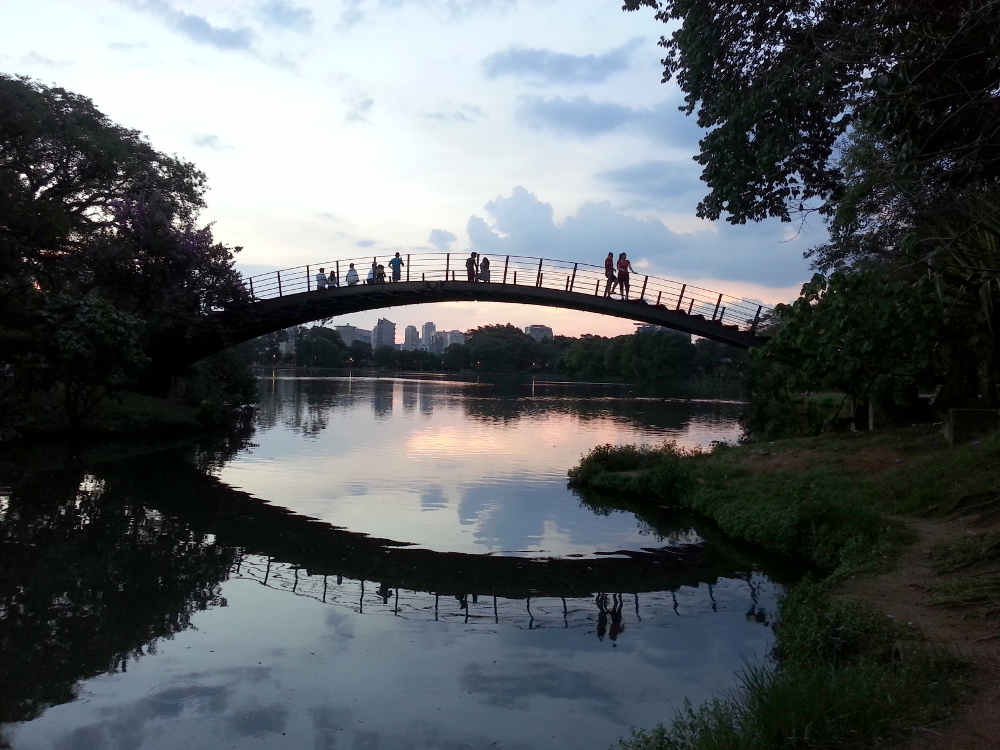 On Sunday, we went to the historic Luz train station. Next to the station is a museum of Brazilian art called the Pinacoteca. This museum had a great collection of works by Brazilian artists such as Almeida Junior, Dario Villares Barbosa, and many others. The rooms were well-arranged putting different periods in chronological order. There is also a nice park next to the train station and the gallery. 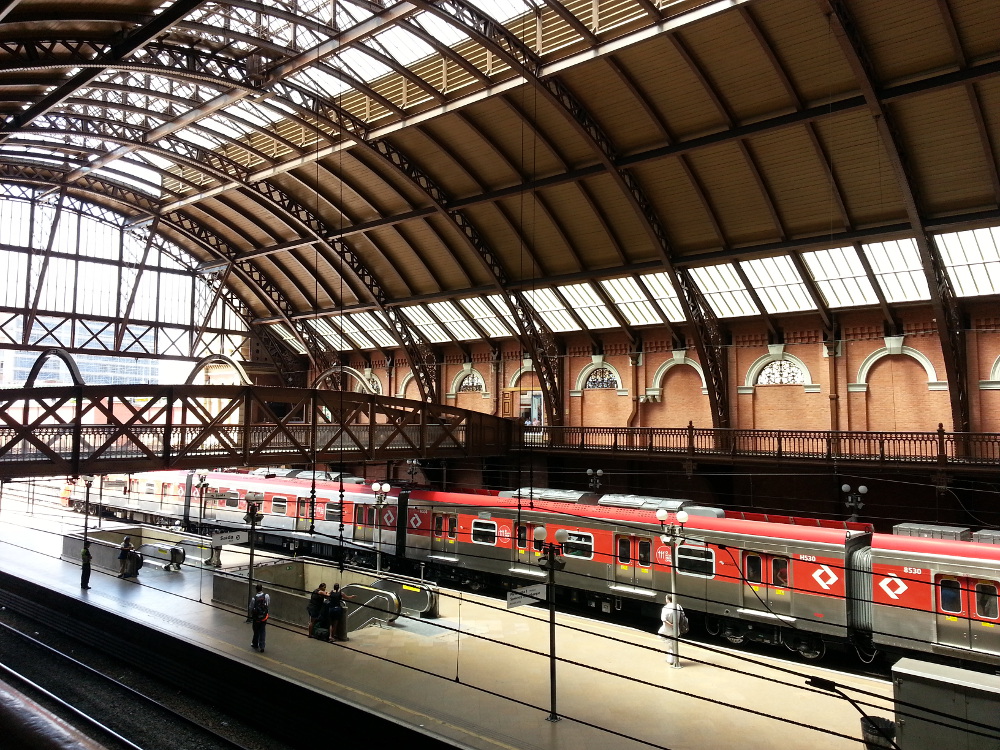 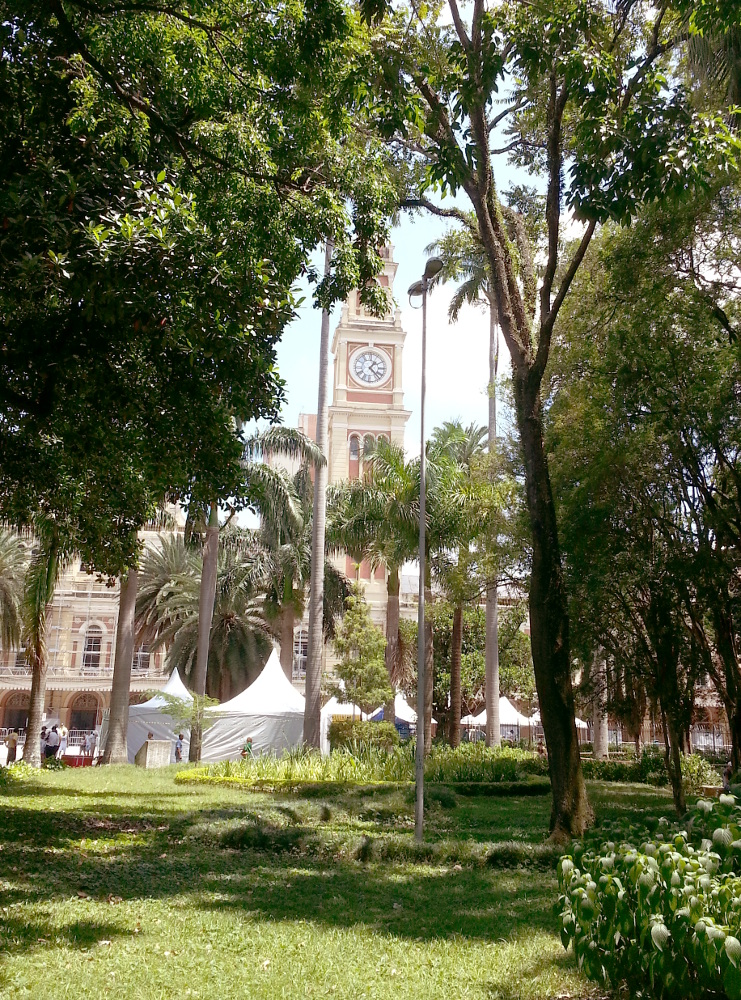 We also went to the Museu de Arte de São Paulo (MASP). This gallery has more of an internationally-focused collection that includes artists such as Cezanne and Van Gogh. It has an interesting layout, with the main exhibition space not divided into rooms, but kept open with paintings displayed on free-standing glass panels. Another part of the gallery had a temporary exhibit on Brazilian artist Agostinho Batista de Freitas who painted lots of scenes of São Paulo. 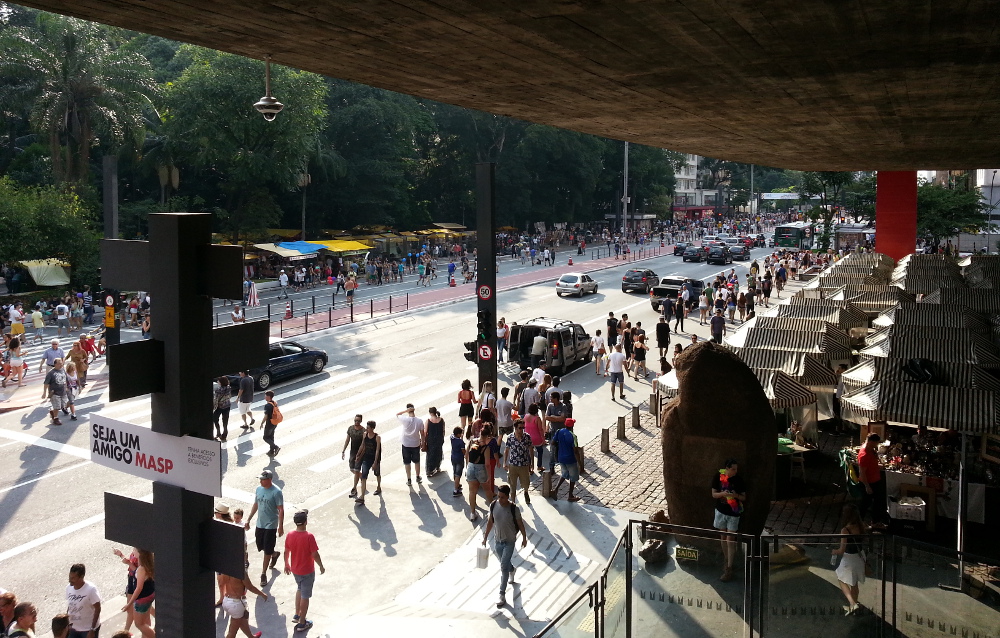 MASP is on Avenida Paulista, which is like the Wall Street of Brazil. It is partially closed to traffic on Sundays and filled with people listening to street musicians, enjoying the sun, etc. 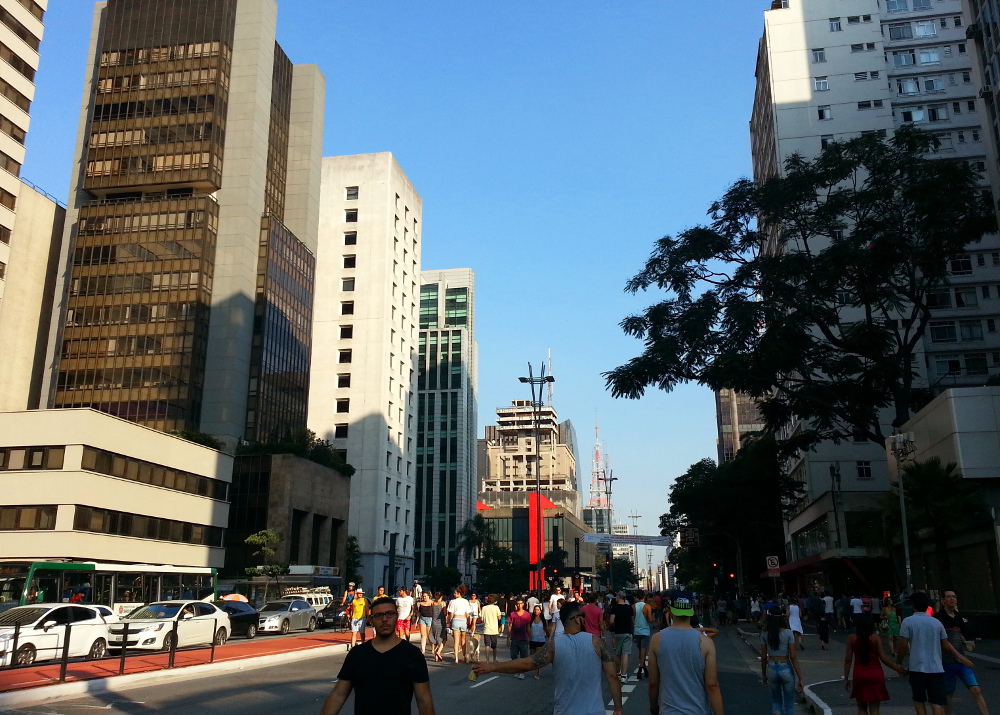