A bit over a year ago, I wrote a post about the mathematics of tiling. In this post, I explore some of those ideas further with an octave script I wrote to draw regular and semi-regular tilings.

The script starts by asking for a vertex configuration number (explained here), given as a 1-row matrix (e.g. [4 8 8] for the first image below). The maximum radius to tile is also requested. After checking that the interior angles add up to 360°, a unit circle is created, consisting of vectors along each edge of the tiling pattern out to a distance of 1 from the origin. That unit circle is then drawn at a vertex that is in the tiling pattern, starting at the origin; the ends of the vectors are new vertices. After it is drawn, a new vertex is selected, and the unit circle is reflected and redrawn. This procedure is repeated out to the maximum radius selected, then repeated from the origin multiple times so that the random paths will eventually tile the entire space.

The script makes use of transformation matrices to rotate vectors and to reflect the unit circle:

Here are three patterns I drew using this script: 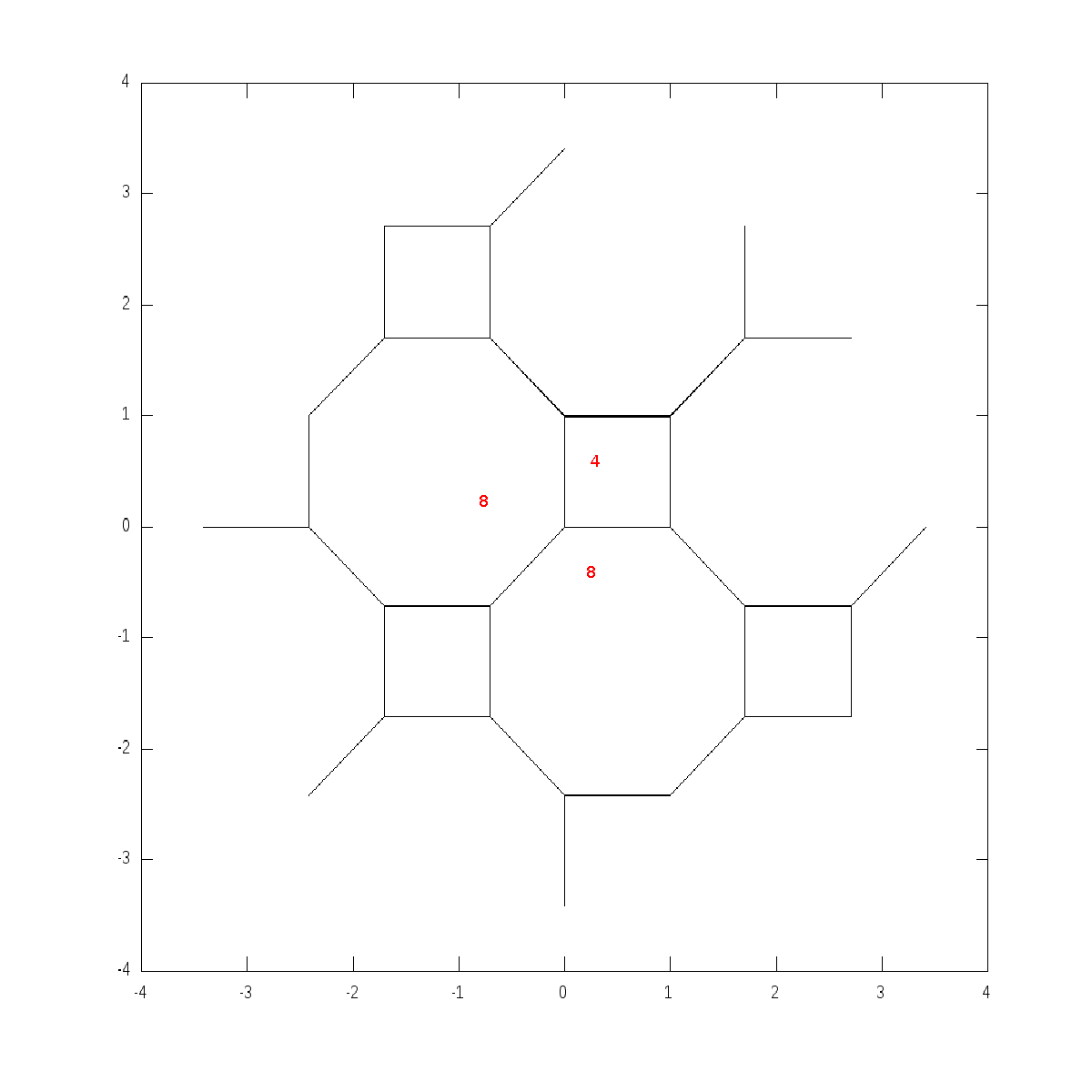 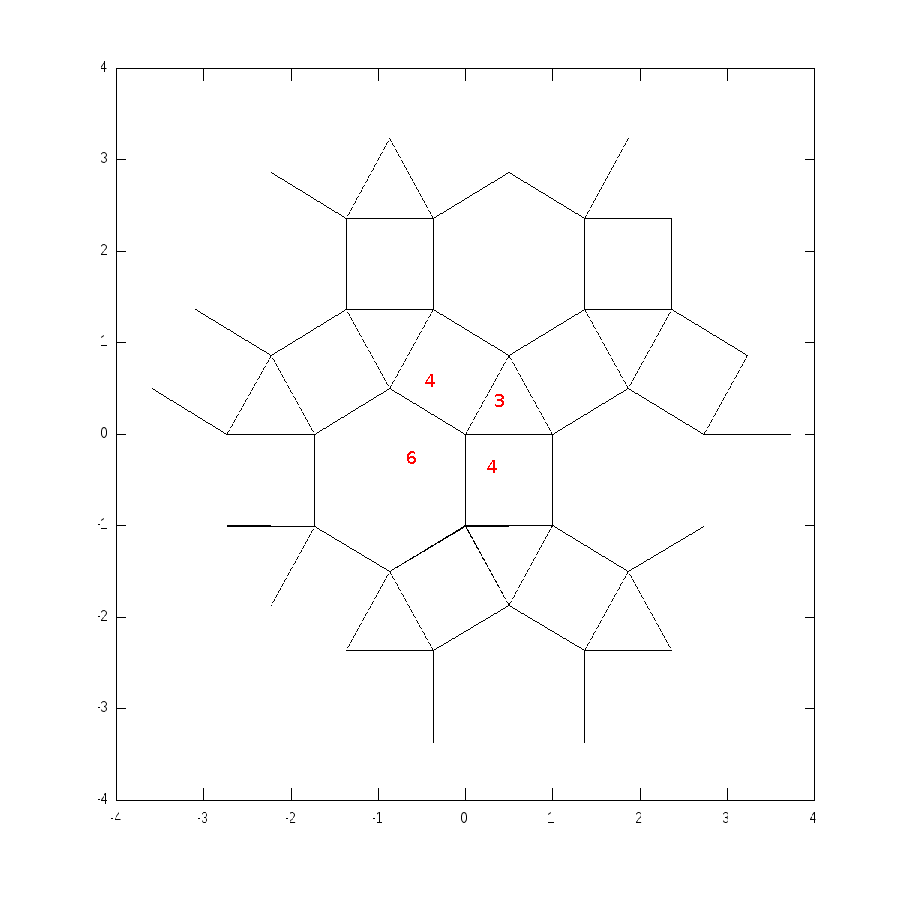 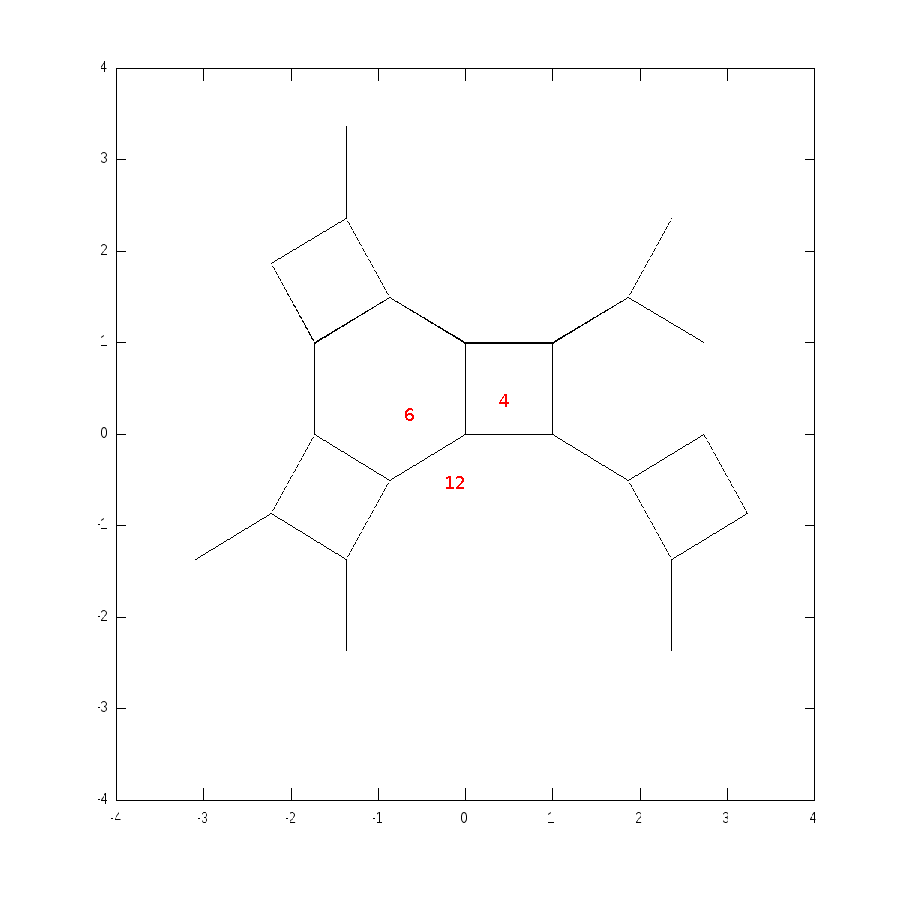 I used a image editing program to add the numbers in the vertex configuration around the origin; the vectors between the printed numbers comprise the unit circle used in the script.

The script runs very slowly (because it goes through over 1000 iterations for a pattern with 5 tiles around each vertex and a radius of 4). It could probably be improved with further work (e.g. a more methodical approach to avoid traversing the same path multiple times like it does in this stochastic approach).

One of the tilings I tried, 3.3.3.4.4, did not draw the proper pattern. My assumption is that reflecting the unit circle between vertices is not the correct approach in that case—maybe a certain rotation would work instead, but I don't know for sure. This particular tiling has a different symmetry than the other ones I tried, so that is probably related to it not working from the same script.

This post is a brief review of a board game I got recently. I backed the campaign for the board game Privateer, on Kickstarter, back in December 2013. After a 3 year wait, it finally arrived, and had some chances to play it over

This post is about an alternative to taking your car into the repair shop when the check engine light comes on. Six years ago, I bought an on-board diagnostic (OBD) interface tool (you'll find them for sale on Ebay, Amazon, etc. if you search