The title of this post comes from this comic, although it's a topic I've been planning to write a bit about.

Moiré patterns are wavy effects that appear when two regular patterns (grids, parallel lines, etc.) with similar spacing interfere with each other. Lighter and darker regions appear in locations where the two patterns are closer or further to being in phase.

These patterns are visible everywhere if you keep your eyes open. A very common example is taking a picture of a screen with a digital camera since both have grids/lines of pixels and the spacing won't be a perfect match.

An example can also be seen in this photo I took of a mesh mail basket in my office: 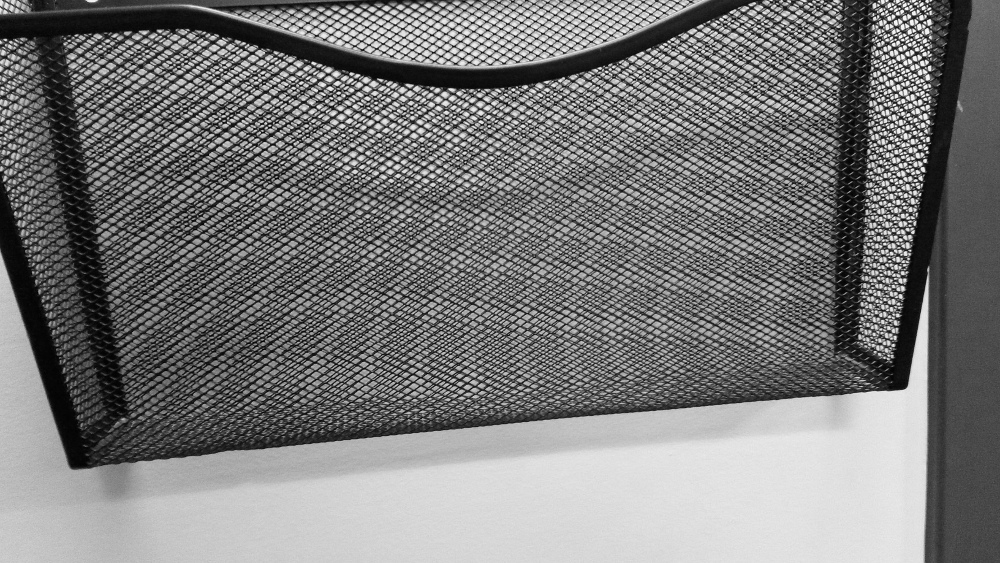 In this case, the front and back grids have the same spacing, but the apparent spacing for the one in the back is smaller since it is farther away. This difference in apparent spacing produces the Moiré pattern.

Looking at it mathematically, if the grid spacing is ℓ then the apparent grid spacing for the back panel will be:

ℓ' = ℓ ˙ d1 / d2,
where d represents the distance of each panel to the observer.

The wavelength of the Moiré pattern (using the equation given in the Wikipedia article with a small change in notation) will be:

Patterns in which the spacing is very similar will have a long wavelength for their Moiré patterns (i.e. a low beat frequency).

This makes me wonder if Moiré patterns could be used for some range-finding applications?

This webpage has a cool interactive app for generating Moiré patterns.

While I'm talking about math, here's a random article that I came across recently. It touches on tiling, among other things.

On a completely different topic, this past weekend I attended the annual Reel Paddling Film Festival screening in Fredericton for my second time. I'm not going to write a full post about it, but did want to share a clip from Botella, a film I liked:

Other films at this festival that I liked included Noatak and Rediscover North America.