... In this case, it's the absence of the "creek", rather than the proverbial paddle, that could be problematic.

The "creek" in this case is the Rio Grande, that flows through Colorado, New Mexico, and forms the border between Mexico and the state of Texas. Reporter Colin McDonald and photojournalist Erich Schlegel have just started on a seven-month expedition to travel the entire length of the Rio Grande and report on issues related to water (environmental, social, etc.). The expedition is called the Disappearing Rio Grande project, and it has a great website hosted by the Texas Tribune newspaper where they're posting regular updates as the journey progresses.

This project was funded from Kickstarter. I was one of the backers and received a great water colour painting as a promotional reward. This painting is based on the course of the Rio Grande as it flows past Hatch, NM. 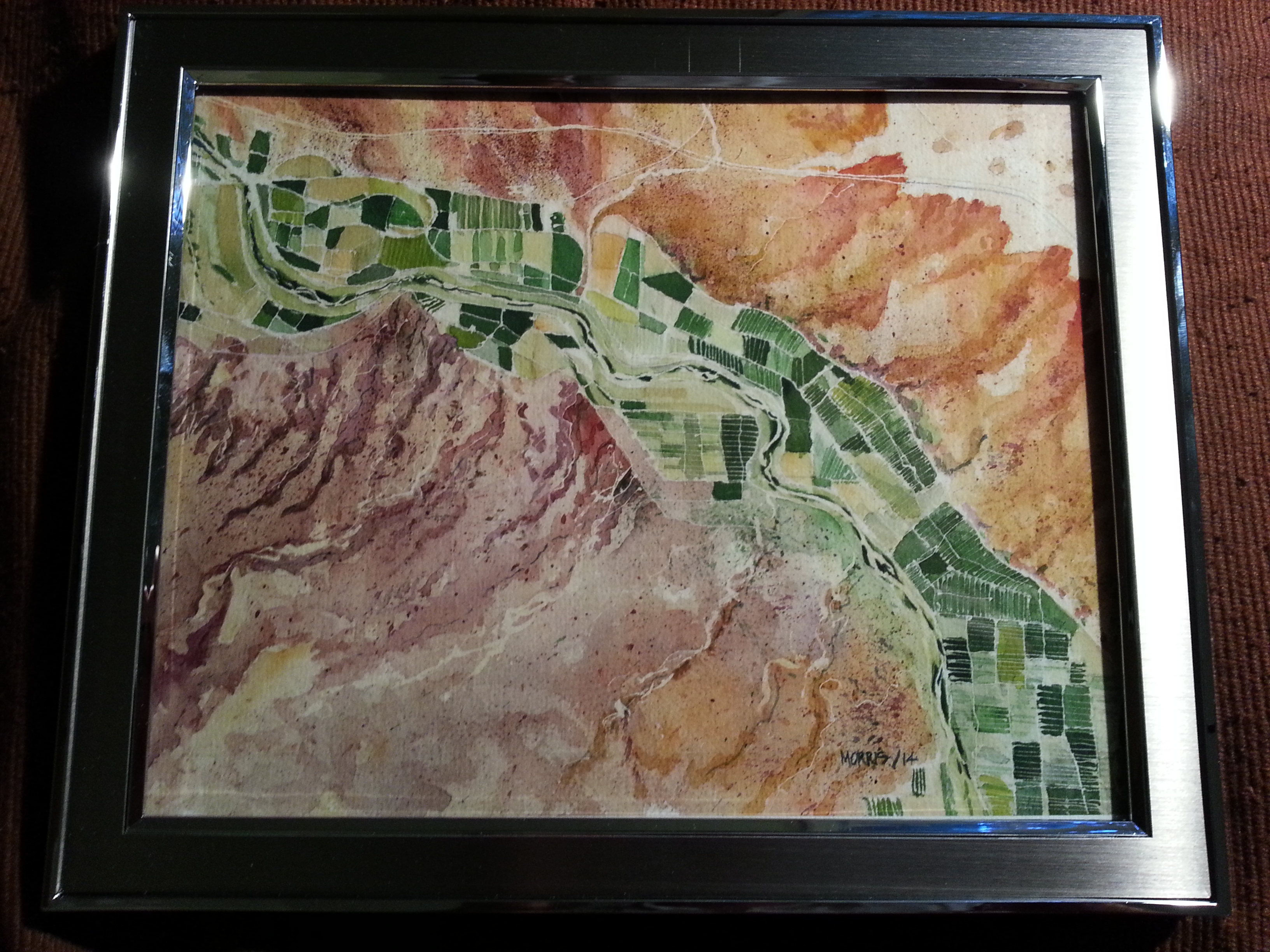 I'm excited to follow along with this expedition online. Issues of drought, forest fires, and over-allocation of irrigation water are worth knowing about. One of the early posts does a good job framing some of these issues. On that day, they climbed the Stony Pass in Colorado, that lies on the Continental Divide; water on one side flows to the Gulf of Mexico via the Rio Grande and water on the other side flow to the Pacific Ocean via the Colorado River—except little of the water manages to reach the sea anymore (on either side).

For fun, I’m taking a few ounces of snow to carry with me to the coast. Since the completion of Elephant Butte Dam in New Mexico in 1916, and the expanded irrigation and management of the river it allowed, practically no water from the Rocky Mountains has made it to the Gulf of Mexico via the Rio Grande.

One thing I was really impressed to see from this expedition so far were the tables of water quality data that they measure every day or two. It should be really interesting to see how the conductivity (which is a good proxy measurement for salinity) increases as the river passes through agricultural regions and cities. Dissolved oxygen levels can be locally impacted by poor wastewater treatment, for example, so that's another measurement I'll be keeping an eye on. One thing I wish they'd add to their monitoring programme is nitrate concentrations. They can be quickly and easily measured with a kit from Hach, and would reveal a lot about the impacts of agricultural run-offs.

The archive of posts from the Disappearing Rio Grande expedition conveniently shows what kind of content is available for each day: written posts, photos, water quality measurements, and map placemarks.

Enter your email
Subscribe
Contrasting and synthesizing the perspectives of Balaji Srinivasan and Peter Zeihan. Skim down to the section on "Contrasting Geopolitical Outlooks" if you want to get to the main part of this post more quickly. Introduction The present moment certainly feels like we can't take anything for granted anymore. Recent events
Annual retrospective 2022 was not a very active year here on The Drafting Table (because it was a very active year at home and at work). I had seven posts, the fewest of any year since I started this blog. However, I've got a backlog of something like 10 partial
The topic of AI/ML (machine learning) is getting a lot of buzz right now. That makes this book review pretty timely. I. Seven Games: A Human History by Oliver Roeder is a book that came out this year. It is about board and card games, the seven alluded to