I was recently down in northwestern Virginia on a business trip. Because I was there over a weekend, I had the chance to do a couple of hikes in the area.

One spot I went hiking was in Shenandoah National Park. While there, I drove the northern third of the scenic Skyline Drive and hiked the Overall Run Falls trail (approx. 10 km, starting from the Hogback Overlook on Skyline Drive). This trail follows the route of the Appalachian Trail for a short distance and the Tuscarora Trail the rest of the way to a series of waterfalls. Here are some photos I took in this national park:

The next day, I went to Harpers Ferry, West Virginia. This is a historic town (with well-preserved buildings from around 150 years ago and costumed re-enactors) in a gorgeous setting at the confluence of the Potomac and Shenandoah rivers. Its strategic location—upstream from the US capital at a gap in the Appalachian mountains—gave it a role in many historical events. The Lewis and Clark expedition was outfitted from an armoury there, some radical abolitionists attempted an uprising, and a Civil War battle saw the largest surrender of US troops until the Second World War (at Bataan). Harpers Ferry is near the mid-point of the Appalachian Trail; the C&O Canal towpath (now a trail that follows the Potomac River from Washington D.C. to western Maryland) also passes through the historic park. This canal was built shortly after the Erie canal (which was discussed in a couple of books that I've read) and was intended to provide a transportation route into the interior of the continent. Aside from occasional locks, the section I saw looked like little more than a wide ditch with an adjacent path (originally for animals to walk as they towed boats); its significance is more impressive than its appearance. Not being an American, I wasn't as interested in the Civil War history of Harpers Ferry as in the natural setting and infrastructure history. While there, I hiked up Maryland Heights (after crossing the Potomac River on a bridge that is part of the Appalachian Trail; the round trip was around 8 km, I think). Here are a few photos from Harpers Ferry: 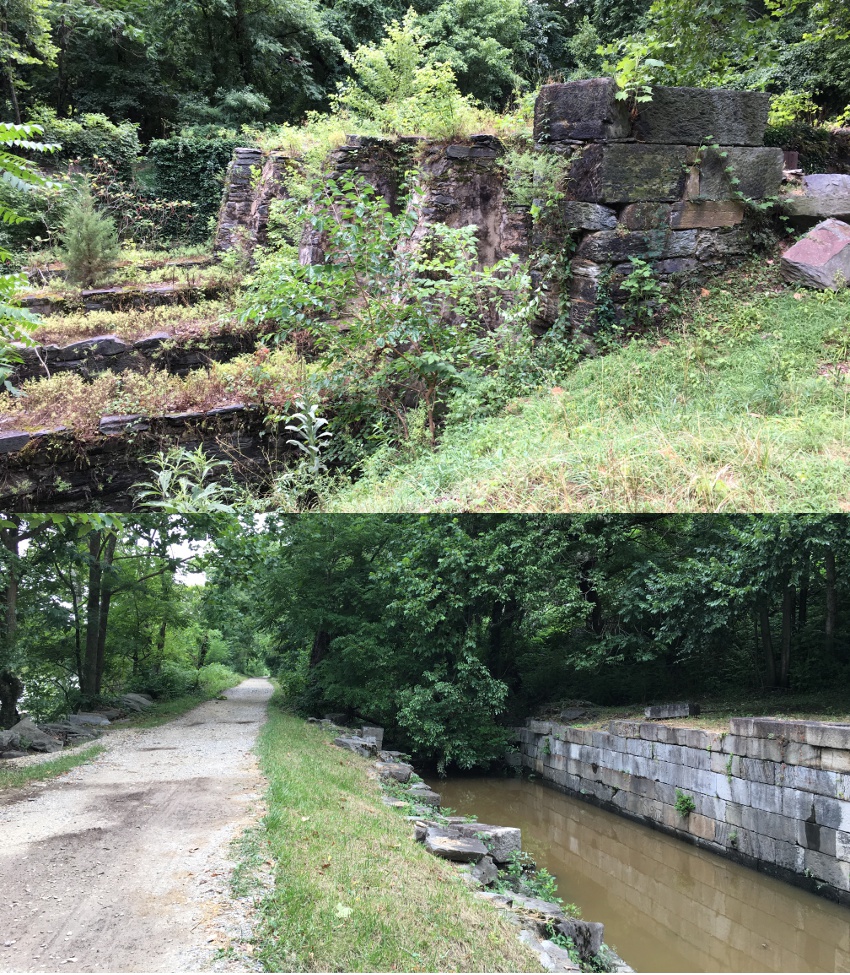 The upper image is of a water-powered pulp mill with a 15 tons per day capacity. The lower image shows the remains of a lock on the C&O canal. Next is a panorama of the town from Maryland Heights:

On my trip to Virginia I flew into Dulles airport. When I arrived, I wasn't in a hurry, so I paid a visit to the Udvar-Hazy Center. This aviation museum is part of the Smithsonian and is well worth visiting. The highlights were seeing a space shuttle (Discovery) up close as well as an SR-71 Blackbird.

Here are photos of the space shuttle and the SR-71 (note the ramjet engines!):

The part of Virginia I was in is in the Chesapeake Bay watershed. The sensitivity of the bay environment to excessive nutrients means that effective wastewater treatment is in demand. Some previous business trips have taken me to another part of that watershed, along the Susquehanna River in Pennsylvania.

It looks like the rest of the summer is going to be very busy with my job, but I have some topics in mind that I plan to post about when I have time: a technical paper on biofilms, some book reviews, and some outdoor recreation closer to home.