I was thinking this summer about when I was half as old as I am now. That year I went to a Royal Canadian Air Cadet summer camp to learn how to pilot a glider. I dug out some photos and decided to share them here.

The camp, Regional Glider School – Atlantic (RGS-A), included both theoretical and practical instruction on flying an unpowered aircraft. The classroom parts (and the accommodations) were held at Nova Scotia Agriculture College while the actual flying took place at Debert airfield (if you look closely there is a former continuity of government nuclear bunker near the airfield on the eastern side).

The classes include learning about aerodynamics—lift, thrust, weight, and drag—radio communications, and weather, among other topics. I also remember a lot of drilling on the correct way to move the control stick and rudder pedals if you found yourself in a stall or spin.

At the airfield, there were far fewer gliders than trainees. However, no one was bored while waiting for his or her turn. Since gliders have no power of their own, the only way for one to "taxi" from where it landed back to the line-up for taking off is to get a few people to grab the struts and push.

Flying in a glider starts (after completing a safety checklist) with getting towed to a suitable altitude. At Debert, a small powered airplane did the towing, but I also experienced getting towed by a car at a different airfield. Once you release the tow line, you're slowly falling toward the ground for the rest of the flight. Well, more precisely you're falling relative to the air and can actually gain some elevation in a strong updraft (a thermal or a wind deflected up a mountain) but practicing this was outside the scope of our training. The SGS 2-33A* gliders that we flew in have a glide ratio of 22:1, so even starting from a few thousand feet would allow you to fly a loop of a dozen miles or so. One of the interesting aspects of flying a glider is that your attitude (i.e. pitch) is directly coupled with your speed; pushing forward on the control stick pitches the nose down, causing the glider to speed up, while pulling back pitches the nose up, shedding speed—and if you lose too much speed you'll also lose lift and stall. Turning involves using both the ailerons and the rudder to roll and yaw in a coordinated manner (rolling and yawing in an anti-coordinated manner is a good way to lose a bunch of elevation in a hurry). After a bit of practice these movements on the control stick and rudder pedals became almost as natural as riding a bike.

Over the course of that summer I logged a bit over 7 hours flying with an instructor and a bit over 3 hours flying solo. The title of this post is the registration of the glider I had my first solo flight in.

Here are a few old photos I found and scanned. They show taking off, getting towed to release altitude, and landing:

And here's one of me in the cockpit of a glider: 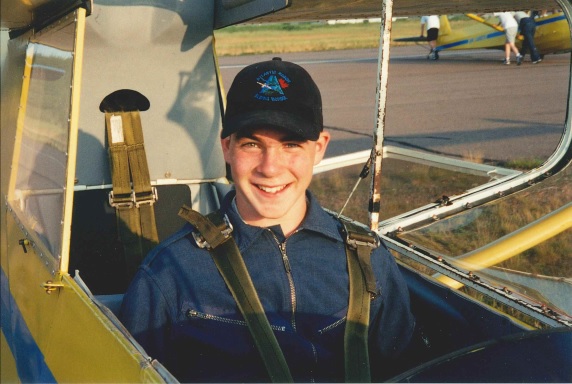 If you find yourself in the Debert area, the Masstown market makes for a worthwhile stop.