The topic I'm writing about in this post is something I see as a very serious issue—both in humanitarian terms and for the impact I expect it will have in the near future.

Awareness of the Issue

Headline after headline recently have told of staggering numbers of people risking their lives to cross oceans and borders seeking safety or a better life, often to receive a cold welcome. Here are some typical examples:

In these articles, four different migration hotspots can be identified:

I made a map of these significant migration corridors using a template (with a Winkel-Trippel projection) from Wikimedia. 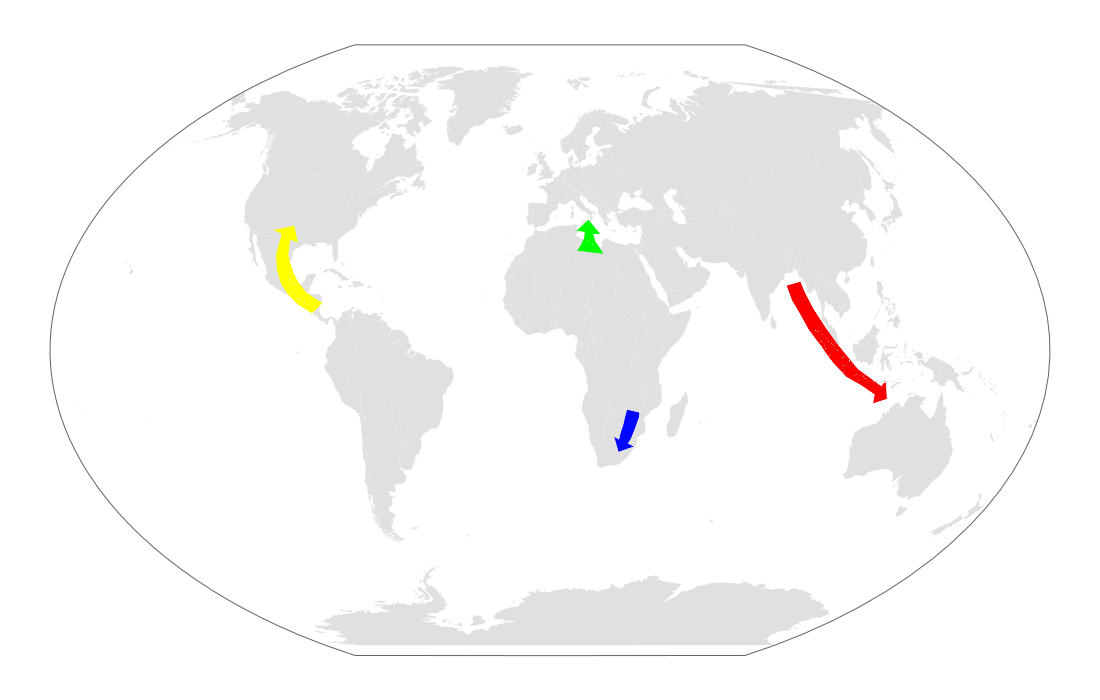 This acute migration activity is unlikely to subside any time soon. There are over 9 million displaced people from the conflict in Syria alone (6.5M internally displaced plus 3 million as refugees in other countries as of Oct 2014). For further analysis, this article compares the situations on the two sea routes described above. This article has some maps and charts related to migration in the Mediterranean, and this article has a map of the route taken by Rohingya boat people. The European Union is discussing a quota system to distribute refugees among member states, as explained in this article.

Helping these refugees and migrants has to be done on a few different timelines. In the short-term, come search & rescue missions
for floundering migrant boats. In addition to government efforts, some private citizens' groups are filling the gap.

In the medium term, places need to be found for refugees to settle. This is a contentious political topic, due to economic concerns (increased burdens on social services and increased competition for jobs) and security concerns (the risk of importing religious violence). Canada has pledged to settle 10,000 Syrian refugees, which is comparable to other countries' pledges, although it is a small number next to the total number of displaced people. I'd be happy to see many of them settle in New Brunswick (probably focussing on religious minorities from Syria and Iraq such as Assyrians, Yazidis, and Druze to be more confident that our new neighbours aren't Islamic State sympathizers)—besides helping a humanitarian cause, it could also help keep our population from shrinking further. It's also worth noting that refugee camps can be very creative, entrepreneurial places. I'm a strong believer in taking initiative, not just waiting on the government to act, so I urge community groups (and even individuals who are able) to look into refugee sponsorship.

In the long term, the solution will involve improved conditions in the countries that people are fleeing now. In the case of refugees from conflict zones, that means reaching peace. In the case of economic migrants, that means development. One interesting idea in this direction is the idea of start-up or charter cities (which is being tried in Honduras, a country that has seen many migrants leave for the US), which would bring some of the legal and business frameworks (e.g. rule of law (often Common Law) and property rights) found in countries that many people are trying to get to closer to the places they're currently leaving.