I just got back from vacation, which is why I haven't had a post for a while. I plan to write some posts about my trip, but first I wanted to share this, since it is well-suited for this time of year.

In a paper titled "Influence of ocean-atmospheric oscillations on lake ice phenology in eastern North America" Doctors Patterson and Swindles investigated ice out dates for a number of lakes in New Brunswick, Maine, and New Hampshire.

Phenology is the "study of changes in the date of recurring natural phenomena".

In their introduction, they explain,

The annual dates in the spring when winter ice cover leaves a lake has come to be known as “ice out” (Hodgkins 2013).
Ice out is also sometimes referred to as “ice off” (e.g. Ghanbari et al. 2009) or “ice break up” (e.g. Sharma and Magnuson 2014). Ice out records are more valuable than
ice formation records as the breakup and disappearance of ice from a lake in the spring can occur very quickly (< 24 h), whereas fall freeze-up may take many days, and may be punctuated by several freeze–thaw cycles before ice finally settles in for the winter (Robertson et al. 1992).
Ice out dates for lakes correlate most strongly with local, late winter air temperatures and thus provide an important quantitative and annually-resolved source of hydrologic data for late-winter/early-spring climate change (Futter 2003; Hodgkins 2010; Hodgkins et al. 2002; Livingstone and Adrian 2009; Shuter et al. 2013). These data have been compiled primarily by amateur citizen scientists for a variety of purposes, including determining fishing seasons, estimating the spring opening of ferry boat routes, community contests, and general curiosity (Futter 2003; Hodgkins et al. 2002). Many ice out records extend well back into the nineteenth century, and are spread throughout the northern hemisphere (e.g. Magnuson et al. 2005). As such these records provide an important proxy for late-winter/early-spring climate in eastern North America, which extends beyond data available
from instrumental climate stations.

They cite previous research stating that the ice cover season has been shortening by 0.6 days per decade. In the current research, they looked at correlations between ice out dates and March–April temperature records, as well as between lakes. They found that,

All lakes in this dataset have trended toward earlier ice out dates, although there have been decadal-scale reversals
in the tendency to later ice out dates. ... After accounting for the considerable variation in absolute ice out dates between lakes, primarily related to climate variation associated with distance from the coast and elevation, there
is a strong coherence in the pattern of ice out across all lakes.

They also used spectral analysis to look at periodicity in ice out dates. They tried to relate the periodicity to known cycles such as the North Atlantic Oscillation (NAO) and Atlantic Multidecadal Oscillation (AMO).

I liked some of the figures the authors used to present their results. I also appreciated this note in the Acknowledgments: "We also thank the generations of citizen scientists who collected the ice out data for all the lakes used in this study."

I've done similar analyses before, so I thought I'd take one of the lakes they looked at (nearby Oromocto Lake) and do some statistical calculation of my own:

Here are my comments and observations: 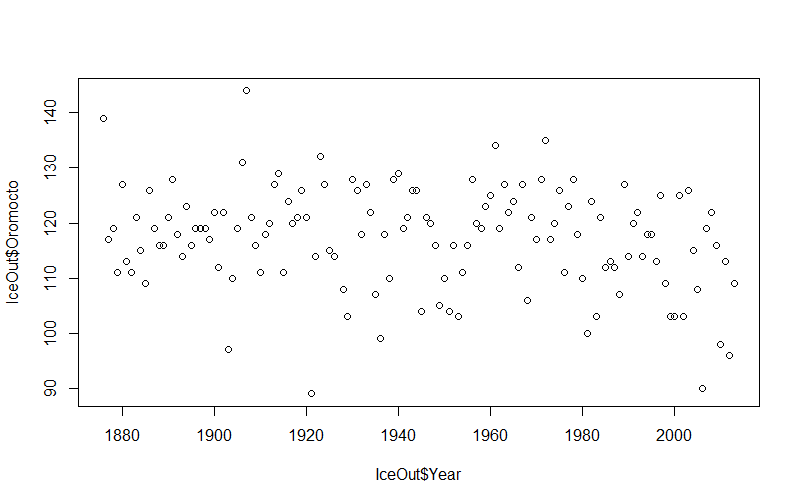 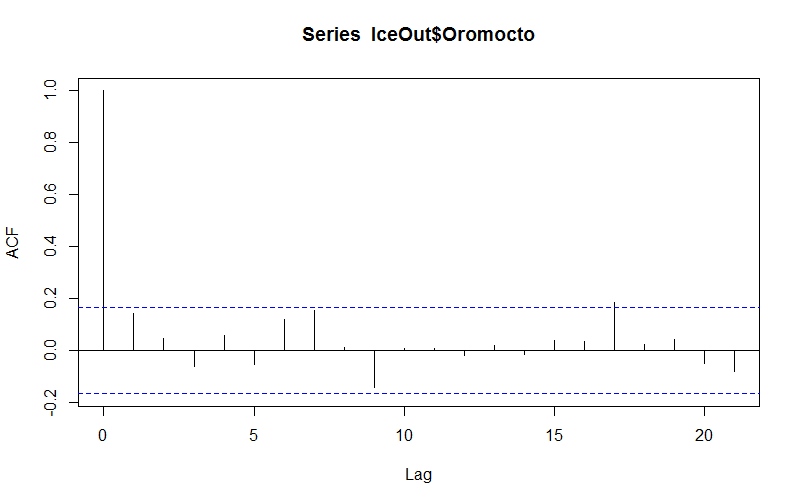