At the end of last week, I had a business meeting in the Ottawa area. I decided to stay for the weekend since it was a good opportunity to visit our nation's capital during Canada's 150th anniversary.

*The other four are Agriculture & Food, Aviation & Space, Science & Technology, and the Canadian War Museum. (Additional museums in Ottawa not covered by the passport include the Bank of Canada museum, the "Diefenbunker", and the Bytown Museum).

If I was making a top 5 list of museums in Ottawa, the three that I visited on this trip would definitely be on it, along with the Canadian Aviation and Space Museum and probably either the War or Science & Technology Museum (although there are quite a few of the remainder that I've never visited).

Before I get into discussing the museums I visited on this trip, I'll just mention that I had a great time wandering around Ottawa and trying a few restaurants and cafés (mainly in the Byward Market area). My hotel was in Gatineau, so I got plenty of exercise walking back and forth across the Alexandra Bridge.

The location of Ottawa carries a lot of historical significance. It is where the Rideau River meets the Ottawa River. Voyageurs travelling from Montreal deep into the interior of the continent often travelled up the Ottawa River then portaged to the French River to get to the Great Lakes. Later, the construction of the Rideau Canal (a UNESCO site) in the 1820s also provided a route from Montreal to the Great Lakes.

The first museum I went to was the Museum of Nature. It's housed in a Victorian edifice with some contemporary modifications. Because I wanted to get to multiple museums that day, I decided to select a few of the galleries of the Nature museum instead of trying to tour the entire place. The ones I went to were on the Arctic, water habitats, and mammals. 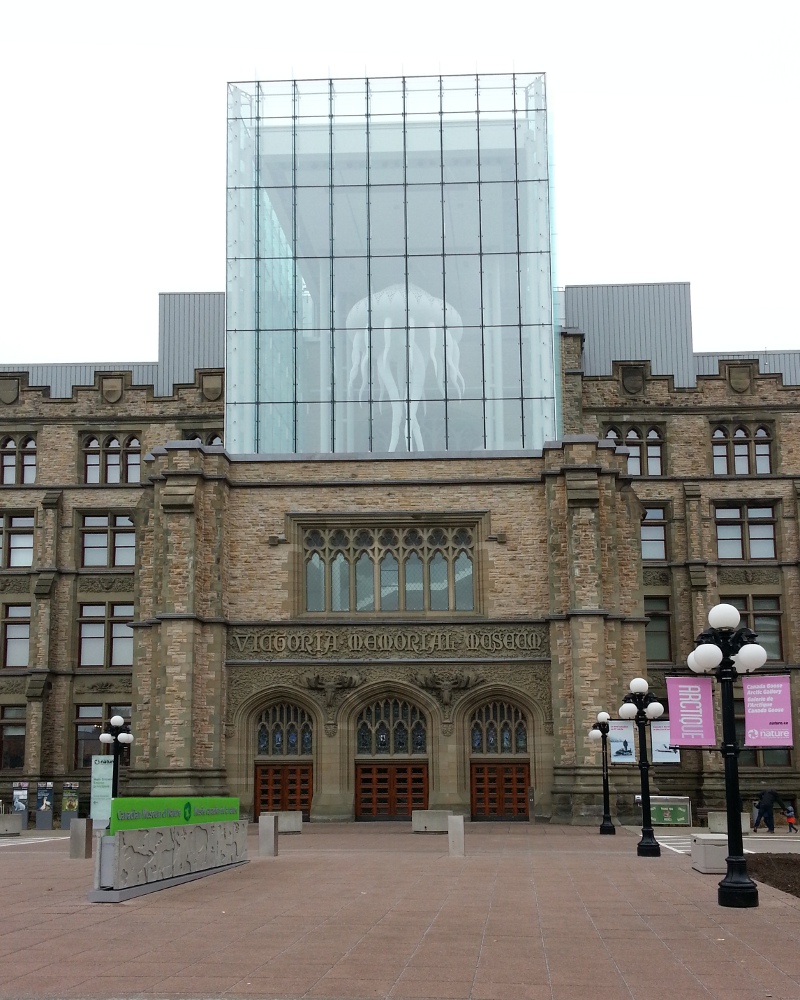 Here are some Arctic foxes and lemmings that were in the Arctic gallery: 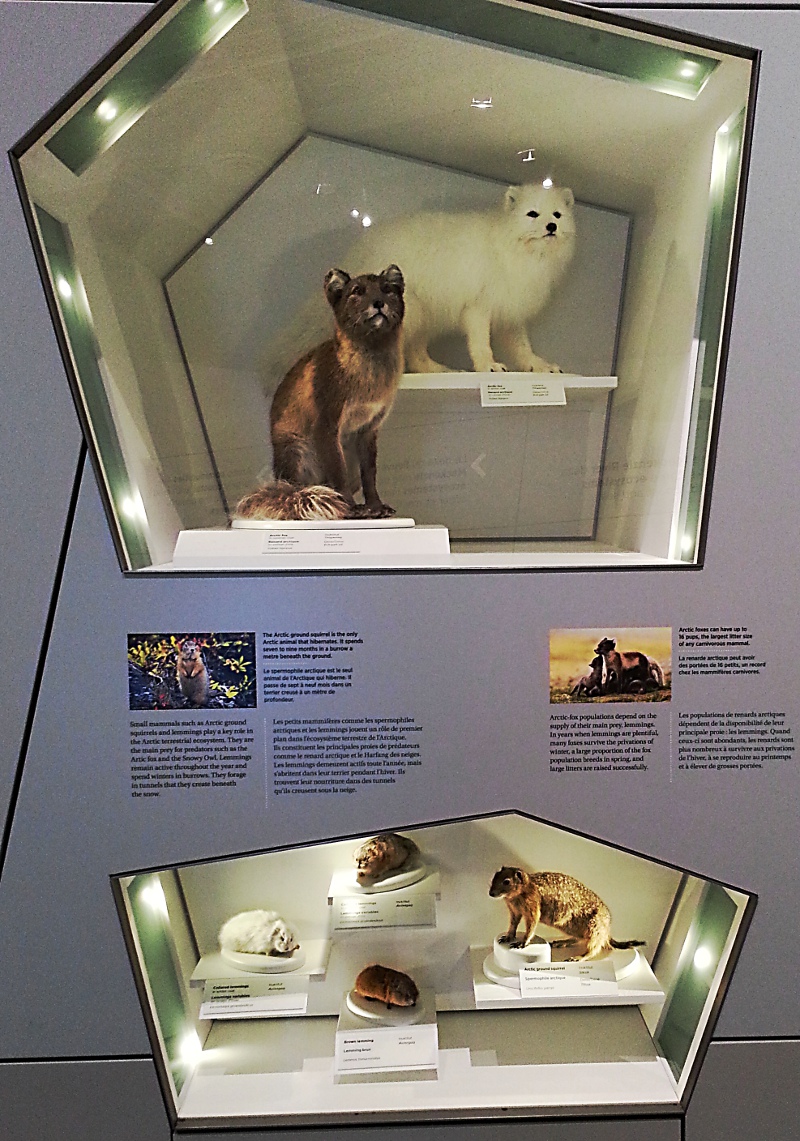 The Arctic foxes were smaller than I was expecting (i.e. smaller than other foxes I've seen). This was also true of the caribou and muskox specimens that were in the Arctic gallery. I'm not sure if there is a general trend of Arctic animals being smaller than related species in more southerly locales or if it was just those particular individuals in the museum's collection—the polar bear certainly was not!

The Arctic gallery also paid a lot of attention to the culture and lifestyle of the people that live there. It had an interesting chart on how Inuit people classify plants and animals ("uumajuit"; interestingly, dogs are excluded from the main category of animals due to their close association with people).

The Water gallery had a blue whale skeleton (see the photo below) as its centrepiece. It also had a timely display on the C3 Expedition, including a big map on the floor of its route around Canada.

The Mammal gallery was really well presented. It included nice dioramas of the most popular Canadian animals along with some good scientific education; some examples were a breakdown of the fat/protein/sugar content in the milk from different mammals, an interactive body-heat camera (to demonstrate that humans are warm-blooded), a display case of different members of the mustelid family, and comparisons of different types of horns/antlers.

The next museum I went to was the National Gallery of Canada. There I spent the most time in the wing focusing on Canadian (including Indigenous) art pre-1967. From meanders through other sections of the National Gallery, I'm pretty confident in stating that that is the best wing to see. The collection has enough works from important movements and artists in Canadian history to trace the development of art in this country (which is not so much the case in their European and American art wing). They had a few good pieces on display from Cornelius Krieghoff and a really great collection of works by Lawren Harris (and other members of the Group of Seven).

In this collage, you can see (clockwise from top left) a couple of paintings by Krieghoff, a work by Harris, and an Algonquin birchbark canoe in front of some Group of Seven works (the two in the middle are "Fire-Swept, Algoma" and "The Solemn Land, 1921"): 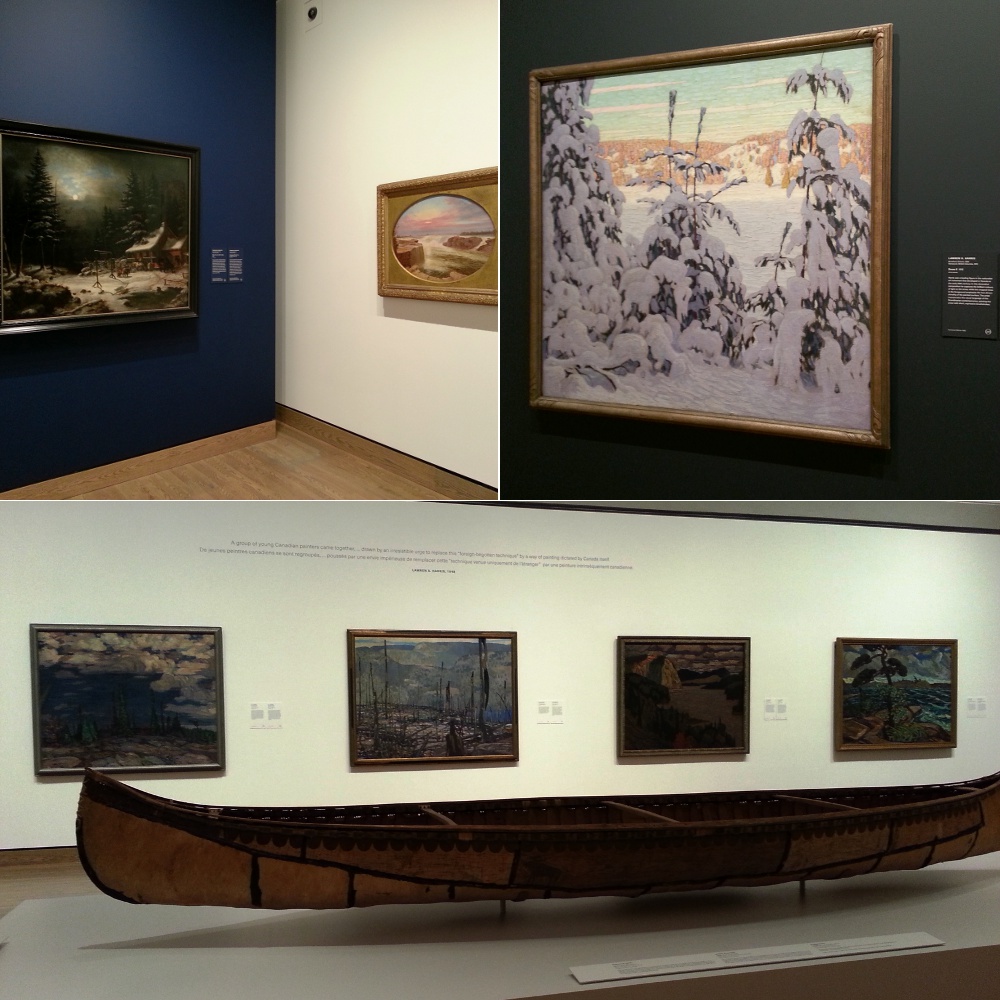 On the topic of canoes, they had a painting by Frances Anne Hopkins of a voyageur canoe shooting some rapids.

A great temporary exhibit at the National Gallery was on James Wilson Morrice. He lived around the turn of the century and was very widely travelled—to Europe, North Africa, and the Caribbean. I wasn't familiar with him before seeing this exhibit but I like his work.

Out of the contemporary art I saw, I liked these works the best: some whale skeletons made from disassembled plastic lawn chairs by Brian Jungen (with the real whale skeleton from the Nature Museum pasted into the same image for comparison): 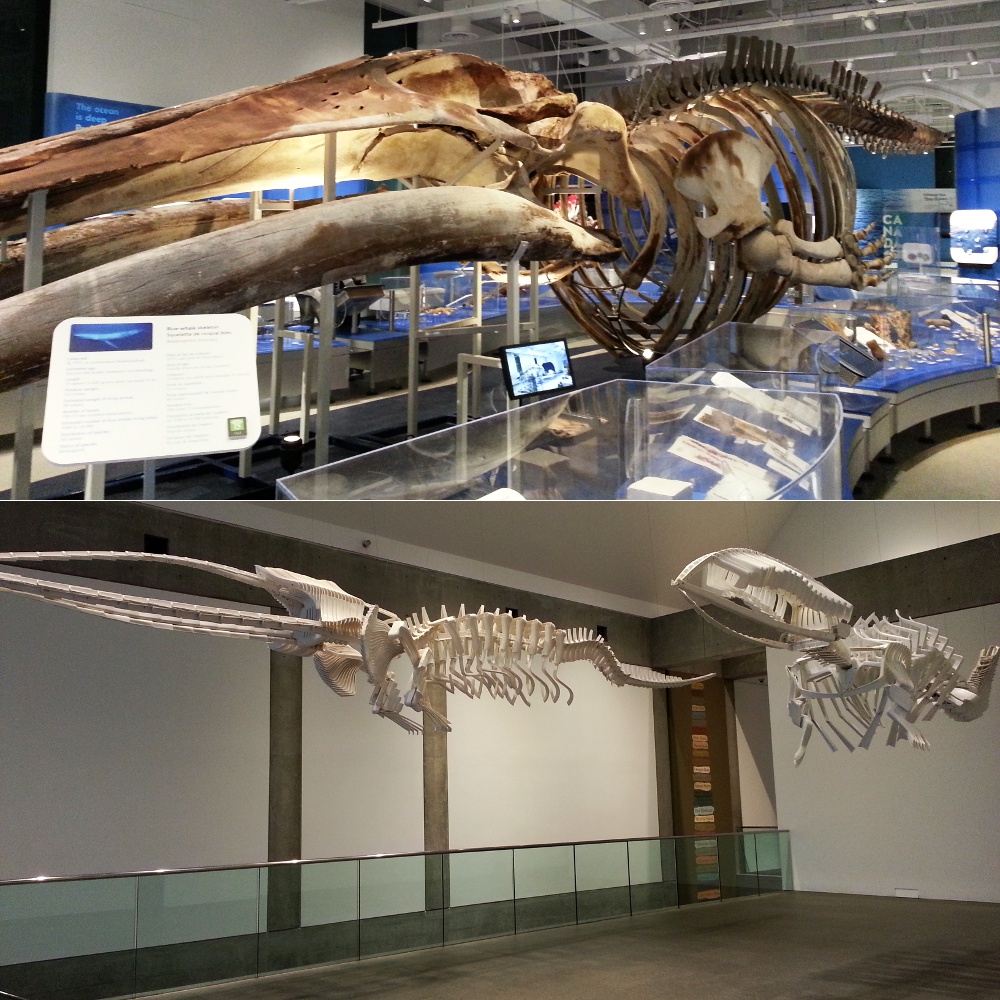 The third museum I went to was the Canadian Museum of History. It used to be the Museum of Civilization but had a slight change in focus and a name change recently. I think there is a need for a Canadian history museum in Ottawa; if we don't tell our story as a nation, who will? This museum is packed with information, so you could spend all day there if you wanted to be thorough. I opted to wander through at a pace that would let me reach the end by closing time (it was already mid-afternoon by the time I got there) and just focus on the displays that seemed the most interesting. 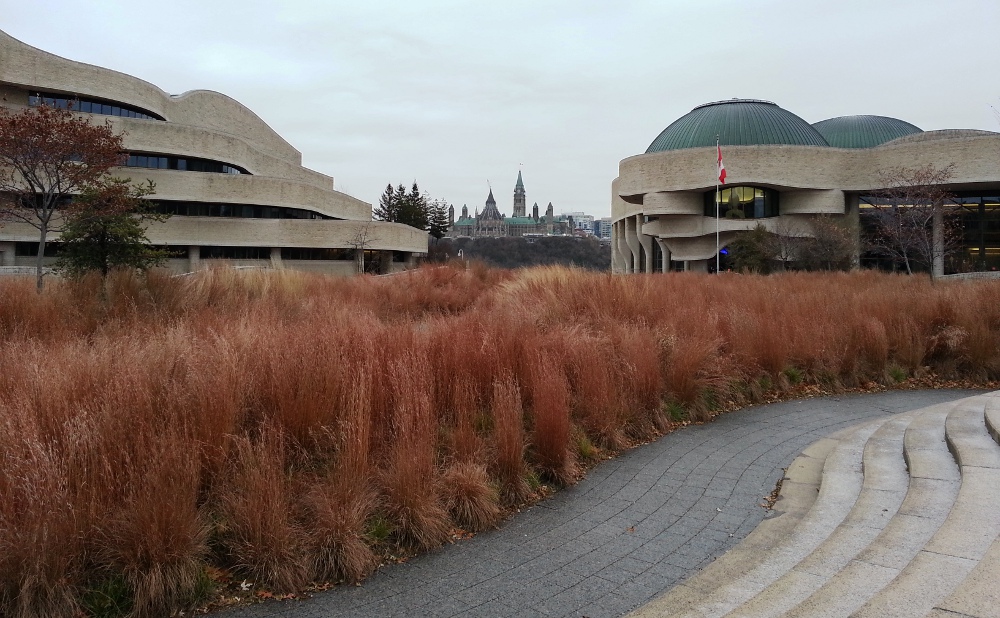 Most of the lower level was dedicated to First Nations history. The museum is well known for its collection of totem poles, but I was most interested by a section that delved into the different ways of life that pre-contact aboriginal communities had in different regions of the country. The First Nations around the Great Lakes, for example, had the most agriculture, along with settlements defended by palisades. On the prairies, hunting involved large groups working together to herd buffalo off of cliffs (further north, communal hunts of caribou took place). In the Arctic, whale hunting was the mainstay of communities. Being from New Brunswick, I was especially interested in the display about the Mi'kmaq, which included a calendar showing annual movements between summer villages (on the coast for fishing) and winter hunting camps (when small family groups would withdraw to the woods).

The upper levels (I skipped a temporary exhibit on the main level) comprise the Canadian History Hall. It is divided into three sections: before the British conquest of Québec (covering additional history of First Nations, plus the Nouvelle France era), the development of Canada as a British colony (then post-Confederation) over the next century and a half, and finally the Twentieth Century.

The museum had some really significant artifacts on display, such as the Bluenose sail plan, General Wolfe's field cloak, and wampum belts for various treaties. They were also making good use of 3D printing to have models or replicas of some items that kids (and hands-on adults) could touch.

An interesting thing that I learned about Champlain was that he had been on a voyage to the Spanish Caribbean colonies in 1599 and wanted to take a more diplomatic approach to the existing inhabitants on his own explorations in Canada.

I also learned more than I knew before about the struggles between the Métis and the Hudson Bay Company. Both groups were heavily involved in the fur trade.

The final, modern, section of the History Hall put too much emphasis on politics and social movements, in my opinion. It had a little bit about sports and the arts, but didn't have much coverage of 20th-C. Canadian accomplishments in industry, business, technology, infrastructure, etc. I don't think it would be too hard for the museum to find content to at least touch on some of these sectors. For example, this blog post lists having good banks as a good reason for Canadian patriotism; as a civil engineer, projects like the Confederation Bridge come to mind for me.

All in all, going to these museums was a great way to spend a day in Ottawa. They each have really good collections that are presented effectively. And the buildings they're in all have unique architecture.