This post is about Fort Nashwaak, and an idea (I can't call it a plan, as I'm not in a position to make it happen, but if anyone who is reads this, feel free to run with it) to rebuild it.

One of my main references for this post is the book The Forts of New France in Northeast America 1600 - 1763 by René Chartrand. It says that Fort Nashwaak (also known as Fort Saint-Joseph or Fort Naxouat) was "located on the southwestern tip of the meeting of St John and Nashwaak rivers". It was a "stockade fort built on a square plan of about 100 ft plus its bastions" and contained three buildings (commander's quarters, barracks, and guard house) and an oven. It was built in 1692 (by de Villebon), survived a very brief siege by the English in 1696, and was abandoned in 1698 (the commander relocated to Saint John). There would have been loopholes to fire muskets through in the walls of the bastions, so that attackers could not shelter next to the wall while trying to break through.

Other forts discussed in Chartrand's book include a string of forts along the Richelieu River, which was an important transportation corridor leading into the Saint Lawrence from the south. I think it would be nice to travel along that river from Vermont into Québec, either on the water or biking or driving next to it.

The Fredericton Region Museum has a poster about Fort Nashwaak; I took a picture of it to include the sketch below in this post (a similar sketch is in the book I mentioned). 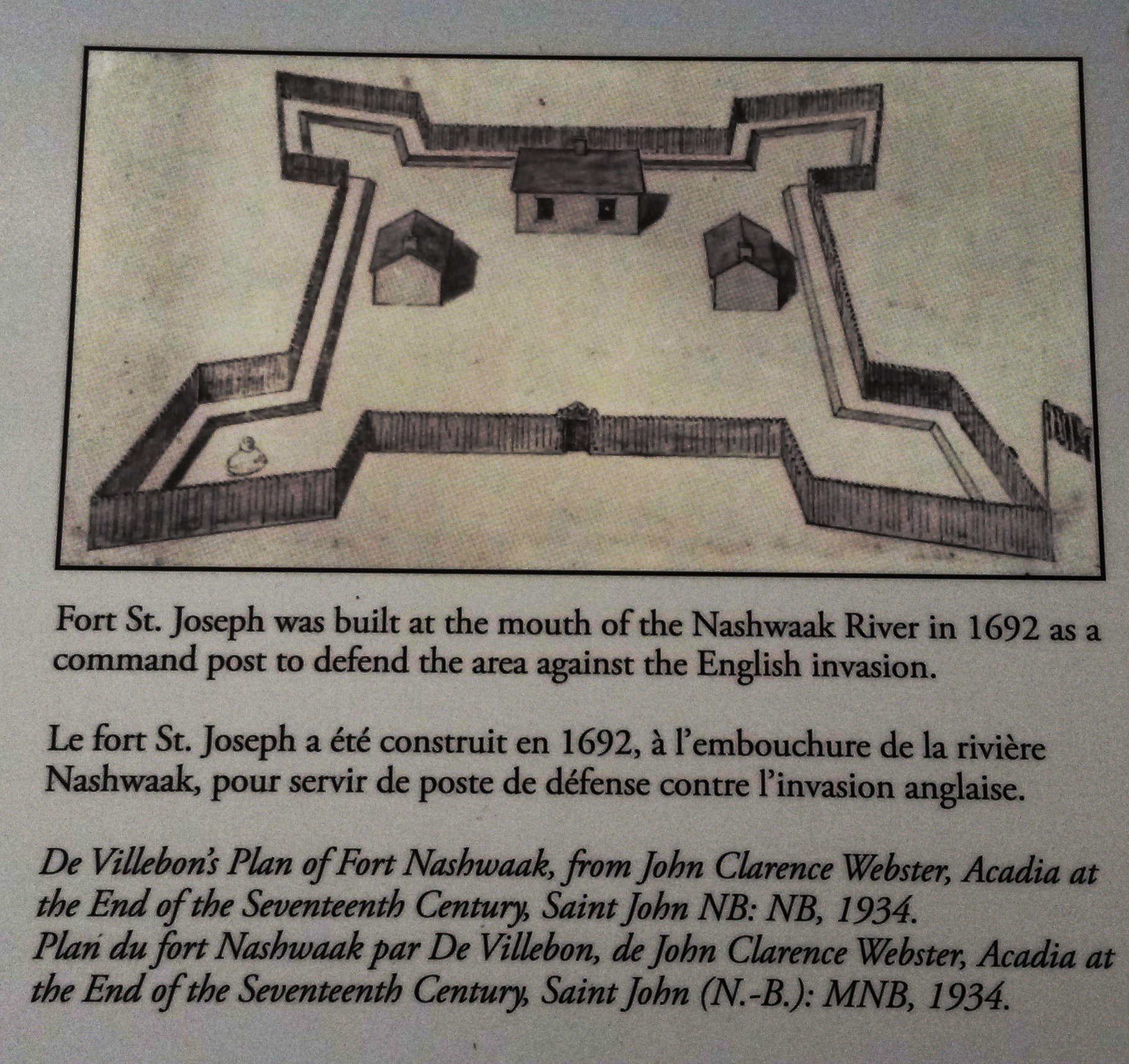 In the drawing, it appears that there is some earth packed against the lower quarter of the inside of the stockade wall.

There was another fort down the Saint John River near Jemseg—its exact location has been lost—that changed hands between the English, French, and Dutch. It pre-dated Fort Nashwaak and was ultimately abandoned in favour of the latter. 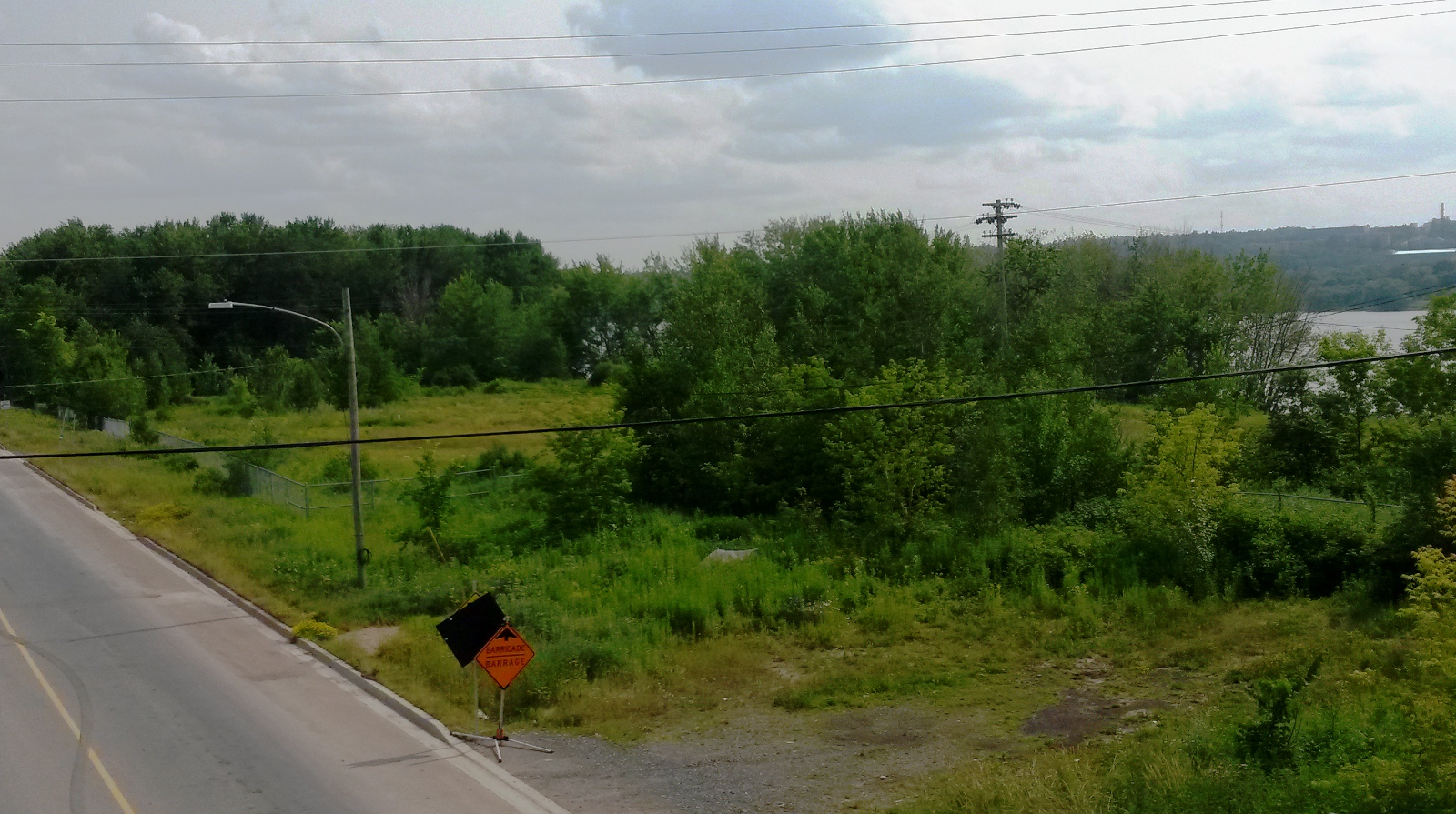 Today, the site is a vacant lot. It used to have some tanks for storing oil, so I suspect there is some soil contamination that prevents it from being used. A land parcel query on the GeoNB web portal shows that the land last sold for $1, further suggesting its value is impaired.

If nothing else can be built in what is otherwise a prime waterfront location, I believe that a replica/reconstruction of the fort would be a good idea. Since a stockade fort doesn't have any foundations, the (presumably contaminated) subsurface wouldn't need to be disturbed.

The timing is also good to do something with this vacant lot, since the historic rail machine shop on the adjacent property (on the other side of the walking trail) is being redeveloped into Picaroons' new microbrewery location (disclosure: another division of the company I work for is involved in this project).

Note that there is a memorial cairn for the fort located 700 metres away from the site itself.

Using the dimensions stated in Chartrand's book, plus others roughly scaled off the sketch (e.g. I estimated the bastions to be around 40 ft ✗ 40 ft), I made a model of the fort in SketchUp, then imported it into Google Earth (see images below). 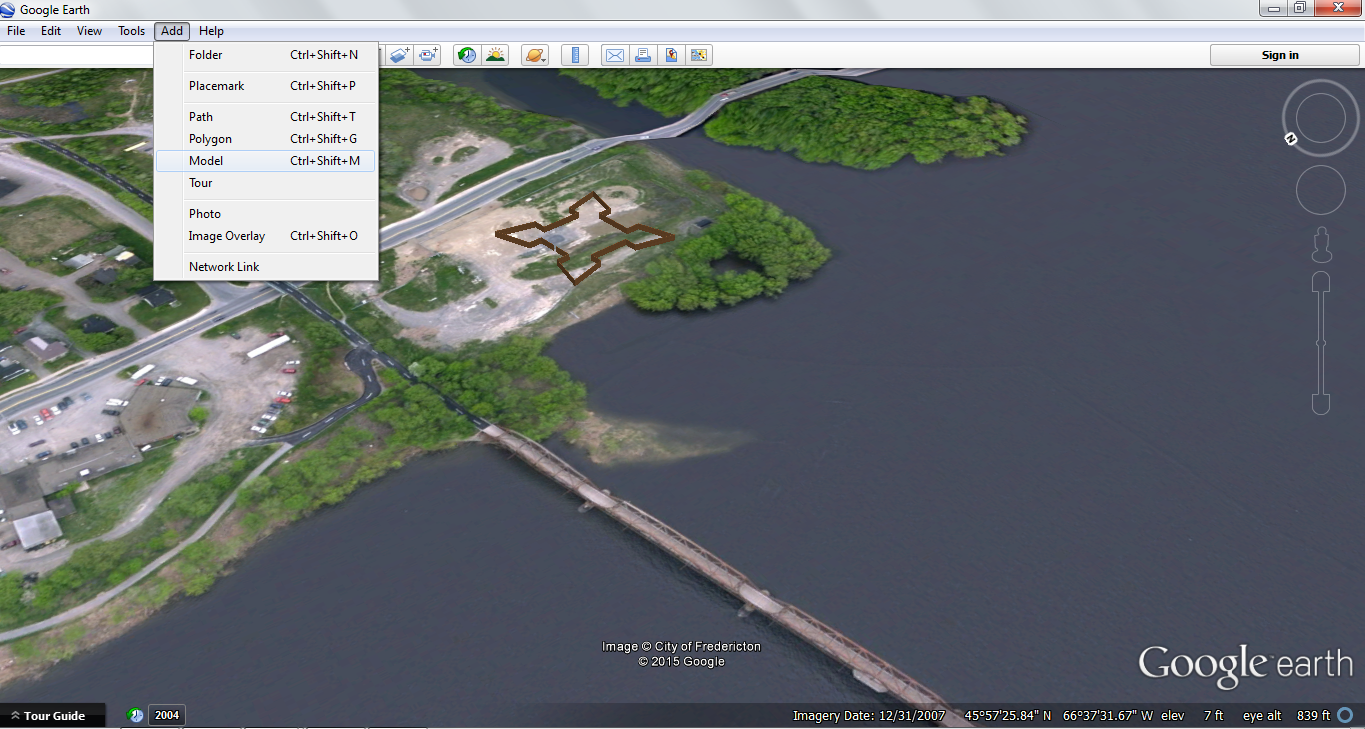 Checking the dimensions of my model in SketchUp showed that it has a perimeter of approximately 860 ft. If the stockade wall was to be built out of logs with an average diameter of 8" (and a length around 12 ft ±), it would require about 1300.

I think I might have drawn the bastions a little too angular in my model compared to the sketch, but it clearly fits on the site with ease.

My idea for rebuilding the fort would be to make the rebuilding process a bit of an event in itself. The site might need to be prepared by professionals first (e.g. some vegetation cleared, levelled with clean fill, maybe some topsoil) but I think the actual reconstruction could be done by volunteers. Maybe they could even dress in period costumes and use hand tools and someone could make a mini-documentary. If the logs were donated and/or if the rebuilding was accompanied by a crowdfunding campaign, it wouldn't even need to cost the city or province (whoever would assume responsibility for it) very much.

The main obstacle that I see is who owns the site, and if the contamination would preclude even this kind of reconstruction activity.

As I've previously mentioned in my post on Eqpahak Island, adding some historical reconstructions (possibly with living history re-enactors) to the Fredericton region that recognize the Acadian and Maliseet history of the area would nicely complement things like the Garrison District and King's Landing.

Rebâtissons-le!
(And by the way, happy Acadian day!)