This post is just a few quick reviews of some movies I've watched recently.

Incendies is a French-Canadian movie from 2010. It was nominated for an Oscar for best foreign-language film. It is directed by Denis Villeneuve (who's done a few other movies I like); it's been on my list to watch for a while and it recently became available on Netflix so I finally got around to watching it. I was not disappointed. This movie takes place in Lebanon (it never actually says so, but it's set in a Middle Eastern country going through a sectarian civil war in the 1970s and 1980s) and Montreal. The plot is kicked off with twins ("les jumeaux") Simon and Jeanne meeting with a notary for the reading of their mother's will. They have only known life in Canada but the will instructs them to return to her homeland, find a father and brother they have never met, and deliver letters to them. The film weaves together scenes from their mother's life with Jeanne and Simon's travels in Lebanon getting to know aspects of her past she had never discussed while she was alive. In the past, the mother gets swept up in the civil war; in the present, some dark family secrets come to light. Overall this is a really moving film. Villeneuve's ponderous style works well at building the tension. The backdrop of the Lebanese countryside further contributes to the austere beauty.

Theeb (ذيب) is an Arabic movie from 2014. It was also nominated for an Oscar for best foreign-language film. It is set in the Hejaz region of Arabia in 1916. The Ottoman Empire has built a railroad through this area. This has brought disruptions to the local way of life. One character (who used to make a living guiding pilgrims through the desert but turned to banditry when the train made that occupation obsolete) says that, "A month by camel now takes a week by train". Because the First World War is going on in the wider world, there are also British officers in the area, trying to sabotage the railroad and encourage the local tribes to rise up against the Ottomans—basically what Lawrence of Arabia did, although he doesn't appear in the movie. Theeb is the name of the main character, and he's a boy too young (maybe around 8?) to care about the context I just explained. However, when a British officer shows up at his tribe's encampment, Theeb is fascinated with the man's belongings (such as a pocket watch, and especially a locked box that he won't let anyone touch). So when his older brother leaves to guide the Englishman through the desert to a certain well, Theeb sneaks along until they are too far from the encampment to send him back alone. The main part of the movie is about travelling through and surviving in the desert, seen through the eyes of a boy. Theeb faces dangers from bandits, wild animals, thirst, and the rugged terrain and is forced to grow up quickly.

Andhadhun is an Indian movie from 2018. It is set in Pune. I haven't really watched any Bollywood films before, but I got a specific recommendation for this one and it was available on Netflix. I went ahead and watched it and quite enjoyed it. The main character is a talented pianist who everyone thinks is blind (he actually can see more than he lets on). Two events change his life: he meets a girl who becomes his muse when she accidently runs into him with a scooter; and he is at the scene of a murder where the perpetrators only let him go because they assume he saw nothing. The chain of events that follows has as many misapprehensions and twists as a good Shakespeare play. In addition to the plot, I found this film interesting as a glimpse into contemporary Indian culture. For example, one thing that stood out was how much English was interspersed in the language the characters were speaking (which I assume was Hindi).

Of these three movies, Incendies is the one I would recommend the most (but you have to be in the mood for a heavy drama). Andhadhun was the one I'd say was the most entertaining.

Here are trailers for these three movies:

In addition to the movies discussed above, I wanted to quickly mention a hike I went on earlier this week. I was in Pennsylvania on a business trip and had a free evening so I went on a short—but strenuous—hike. The hike was at the Lehigh Water Gap (on the east side of the river); it is the first one mentioned in this list. I went up the ridge on a section of the Appalachian Trail (white blazes), which was quite steep, and came back down a longer trail (blue blazes) with a gradient that was a bit less intense. Here's a view of the gap from near the top of the ridge: 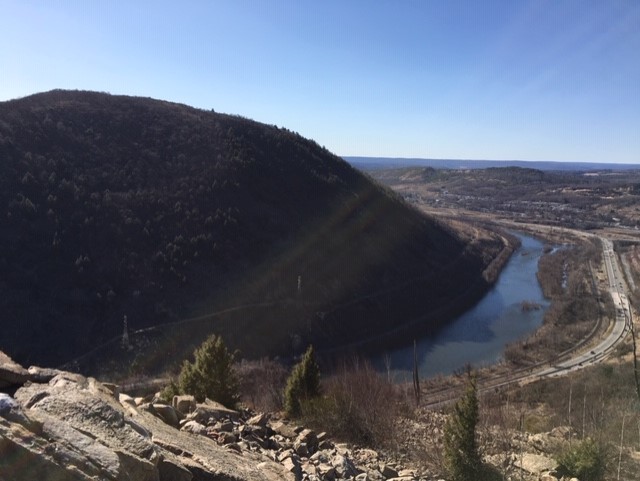