I intended to have this post written shortly after Easter, but April has been a really busy month so far (and looks to continue as such) so I didn't get to it until now. Next post, I plan to return to my series on Seven Languages in Seven Weeks.

Recently I re-read a book about Paul by John Pollock, called The Apostle. I also took a free course on Udemy by N.T. Wright about one of Paul's letters (Philemon). In this post I wanted to share my notes and the things I learned from them.

The Apostle is written as a biography of Paul, expanding on what is written in the book of Acts with what can be inferred from the Epistles, historical sources, and archaeology. Where nothing else is available, Pollock fills in the gaps with reasoned speculation. It is helpful for understanding the context and audience each epistle was written for. As I'll discuss below, I also appreciated getting a better sense of the cities and regions of the eastern Mediterranean in the first century.

To start with, here is a brief summary of Paul's life from my notes from The Apostle:

In reading The Apostle, I learned about some historical figures that intersected with Paul's life:

An insight that I appreciated from the book is that one of Paul's sermons effectively finishes the speech Stephen was making at his trial.

I also liked this passage on the legacy of Paul's speech on Mars Hill:

Athens had rejected him. He could not know that his speech would go down to posterity beside the Funeral Oration of Pericles and the Philippics of Demosthenes as one of the great speeches of Athens. He could not know that whole books would be written about it or that in a few hundred years the Parthenon would become a Christian church; and the nineteen centuries on, when Greece after long suppression became once more a sovereign state, the national flag which flies beside the ruins of the Parthenon would be lowered to half-mast each Good Friday, and raised on Easter Day in honor of Christ's Resurrection. (p. 116)

From reading The Apostle I got a better sense of the places Paul travelled to—and he did a ton of travelling:

Thus, in his late forties, an age when men settle to comforts and seek a firm base, Paul began his roughest travels. The task was immense. Against him stood the contemporary climate of thought, the great philosophies, the leading religions of the world. His ally was the age-old, unending human search for truth and security. (p. 54)

No man in previous history had traveled so far or suffered so much to bring men truth; he could not stay still or silent while others remained ignorant of the Way, the Truth and the Life. (p. 113)

For example, Paul travelled between Antioch in Syria and Pisidian Antioch at least a couple of times. At least one of those journeys seems to have been overland (other times he would have gone part of the way by ship*), probably on foot. Here is the distance on Google Maps:

*Some of the descriptions of travelling by ship reminded me of the shipwrecks that Dr. Ballard investigated around Rhodes in Alien Deep.

The first major mountain pass on this journey is the Cilician Gates. The city of Konya was known as Iconium in antiquity.

For a more artistic perspective, here's a subway-style map of Roman roads in the second century A.D. (I cropped it to the Eastern Mediterranean region where Paul spent most or all of his life from the original here. All credit goes to the cartographer, Sasha Trubetskoy). Paul would have travelled on many of these roads. 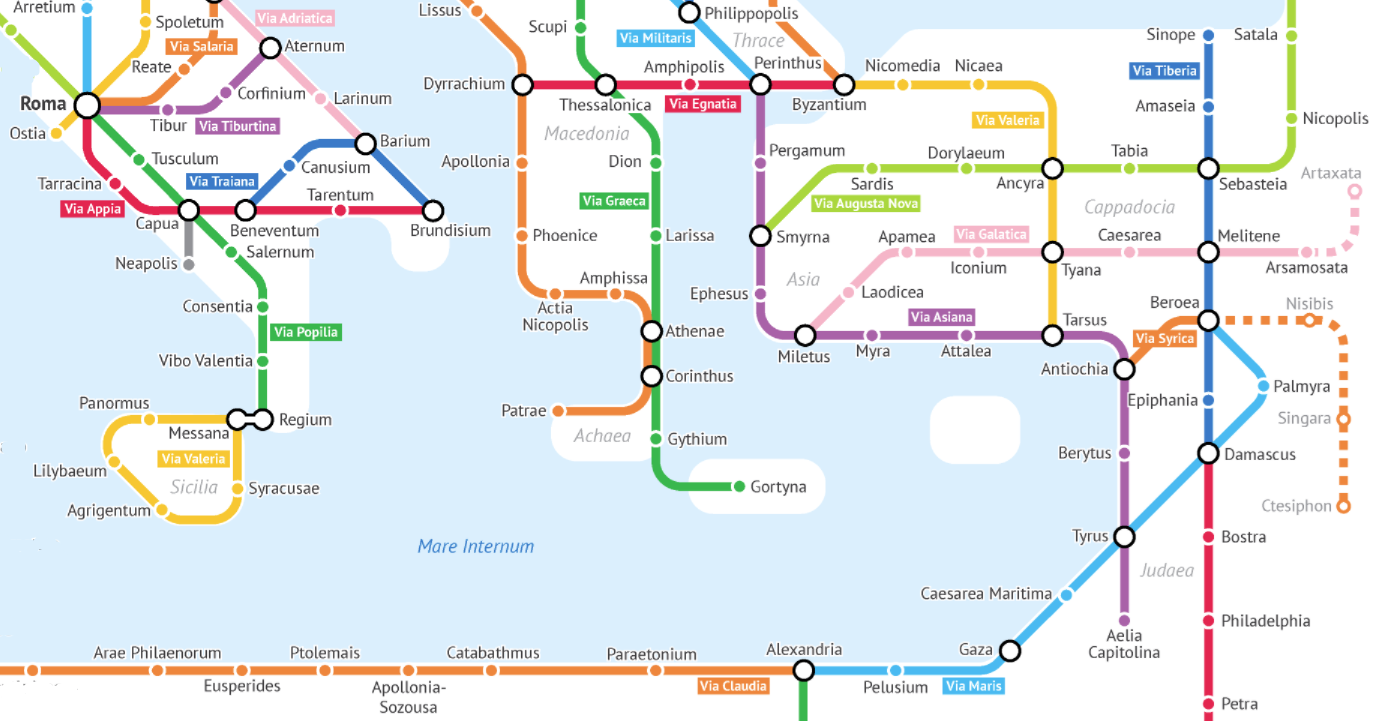 Out of the places Paul went, Galatia was fairly rural (towns like Lystra and Derbe were small) and the Macedonian cities (Philippi and Thessalonica) were also small. Athens and Corinth were big cities, though, and Ephesus was an important regional hub. Adding to these notes about the communities he visited, here are some excerpts from The Apostle where John Pollock describes the context of some of the epistles:

In contrast with previous letters, he is not obliged to combat aberrations; or to rebut criticisms except once, when he snubs slanderers who twist his words to "sin away, to give God's forgiveness more opportunity!" Only once, too, does his tendency to justify himself break through...
Instead there is a calmness, a magisterial confidence in this letter to Rome, the longest he ever wrote, which distinguishes it from those to Galatia and Corinth. It contains some of his profoundest, most difficult writing and much of his most beautiful. ... it has also been one of the world's decisive books. It formed the seedbed of Augustine's faith and Luther's Reformation. It was reading Luther's Preface to the Epistle to the Romans that caused John Wesley's heart to feel "strangely warmed... " (p. 174)

Colossians and the other letter, known as Ephesians, emerged similar in content yet distinctive in style. Thoughts much in Paul's mind are found in both, sometimes in identical phrases so that it is even possible he composed the letters together, dictating part of one, then part of the other. To Colossae, with a particular church in mind, he can include personal messages while Ephesians is more formal yet gives intimate autobiographical comments, especially when his mind is with those who have never seen him. (p. 224)

By implication the letter to Philemon displays Paul's total rejection of slavery as a state compatible with the gospel in a Christian society. Paul was no Spartacus calling slaves to revolt: a sudden end of slavery would reduce the Roman Empire to chaos and he was realist enough to recognize that to agitate for abolition in his lifetime would be senseless, merely provoking the crushing of Christians as a menace to law and order. But he had consistently taught that "In Christ there is neither slave nor free," since all are equal in the sight of their Master, Christ. Both Ephesians and Colossians (Onesimus and Philemon surely being much in mind as he wrote) emphasize the new relationship between slave and free in which each must look on the other as a brother. (p. 227)

The book of Philemon was the subject of the N.T. Wright course I took on Udemy. The course is free and only an hour long, so rather than try to summarize it here, I'll just encourage you to watch it if interested. In the course, professor Wright compares Paul's letter to Philemon with a letter that Pliny the Younger wrote about a similar situation. He says that "Nobody in the ancient world was thinking quite like Paul was thinking", and "Even if this book was the only Christian document from the first century it would show that something remarkable was going on".

Wright emphesizes Paul's concern for reconciliation—radical and costly reconciliation across huge class barriers. He points out parallels between the runaway slave Onesimus and the parable of the Prodigal Son: the gospel calls for an extravagent welcome home for a runaway.

I hope some of my readers found this post interesting. I'll finish it off with a link to an unrelated but insightful sermon on Cain I listened to recently.