In 2012, I had the opportunity to travel to Yemen for my job (a couple of my photos from that trip are at the end of this post). Since then, that country has held a special interest for me. So one time when I was in The Midtown Scholar used bookstore (I've reviewed another book I got there previously) I was happy to find the book reviewed in this post.

My apologies for a late post; this is a complex topic, and I wanted to take the time to do my best to get it right. I hope you'll find it was worth the wait.

Yemen: Dancing on the Heads of Snakes (abbreviated DOTHOS below) takes its title from a simile used by ex-president Saleh to describe the challenges of governing the country of Yemen. This book was written by Victoria Clark, who was born in Aden when it was controlled by the British. It was published in 2010—a lot has happened since then, but the author clearly had a finger on the pulse of the country and some of her predictions have come to pass. More on this below.

Yemen: Dancing on the Heads of Snakes is divided into two parts. The first part covers the history of Yemen for about the past 500 years. The second part is based on a series of interviews and trips within the country in recent years.

One thing to note is that Victoria Clark uses different romanizations of some Arabic words and names compared to some media sources (e.g. the BBC). For example, the Ex-President's name is rendered "Salih" in the book, but is often spelled "Saleh" elsewhere.

From DOTHOS, I feel like I got a good sense of the major regional divisions within Yemen and the history behind them.

Aden has long been an important city due to its excellent harbour and strategic position near where the Red Sea meets the Indian Ocean. It was a very valuable British colonial possession. In recent years, however, it has suffered from conflict and neglect. It was the capital of South Yemen prior to re-unification in 1990, and the rulers of the united country have mainly been from the north. South Yemen was a Marxist state between the end of the colonial period in 1967 and unification in 1990; initiatives like collectivization of agriculture worked out about as well in Yemen as they did elsewhere:

Within five years of the establishment of state farms - between 1975 and 1980 - official wheat yields had dropped by almost two thirds. (p. 121)

Also, a quarter of the population (the most educated segment, naturally) apparently fled abroad following the takeover by the Marxist NLF. I imagine an alternate history, where the British departure was managed better and wasn't followed by violent Marxists, where Aden today could be a prosperous and dynamic city state or special territory à la Singapore or Hong Kong. But that's not the way history unfolded there.

The Central Highlands (around Taiz and Ibb) and coastal plain (Tihama) are the traditional breadbaskets of Yemen. They have been subject to periods of external rule by the Turks and European powers.

In contrast, the Northern Highlands have been much more challenging for outsiders to dominate, due to the mountainous terrain and skilled tribal fighters. This has also been the region that has usually been ascendent over unified parts of Yemen. Imams from the Zaydi sect fought the Turks for independence. In DOTHOS I learned that Sanaa was besieged five times from 1892 to 1955 by tribal fighters supporting the Imam against the Turks or coup attempts. The hereditary Imamate was ended when the Republicans took over in 1962, but like the Imams, Saleh and his predecessors depended on the tribes around Sanaa for support.

Hadhramaut is a vast, nigh-inaccessible region in the east of Yemen. Paradoxically, its people have a long tradition of travelling abroad as merchants and there are large Hadhrami communities in Indonesia, East Africa, and Saudi Arabia. Saudi Arabian influence is strong here, and they covet a corridor to Mukalla for a port on the Indian Ocean.

In his novel Out of the Silent Planet, C.S. Lewis portrayed a fanciful Mars in which the inhabitants lived in steep-walled valleys where they were sheltered from the inhospitable climate on the elevated plateau of the surface. He called these valleys "handramits". The similarity with the name and terrain of Hadhramaut was raised in a letter from a reader. Lewis responded:

[other linguistic coincidences] and handramit resembling the hadramaut in Arabia – are all accidents which I knew nothing of, not having a word of Semitic.

The history, and present politics, of Yemen sort of remind me of George R.R. Martin's Game of Thrones, with all of the regions, factions, and families striving for the upper hand, forging alliances, and so on. I'd draw a parallel between ex-president Saleh and Robert Baratheon, for the après moi, le déluge factor; the Houthi rebels from the Zaydi sect could be seen as House Targaryen for their ties to the old dynasty (i.e. the Imamate).

Speaking of Game of Thrones, in reading DOTHOS I learned about a remarkable woman named Freya Stark. She travelled through Hadhramaut in the 1930s and wrote about it (along with with books on her other travels). During the Second World War, she promoted the Allied cause in the Middle East. Here is an interview with her.

I plotted some of the places mentioned in Victoria Clark's book in Google Earth to help keep the descriptions of the different regions clear: 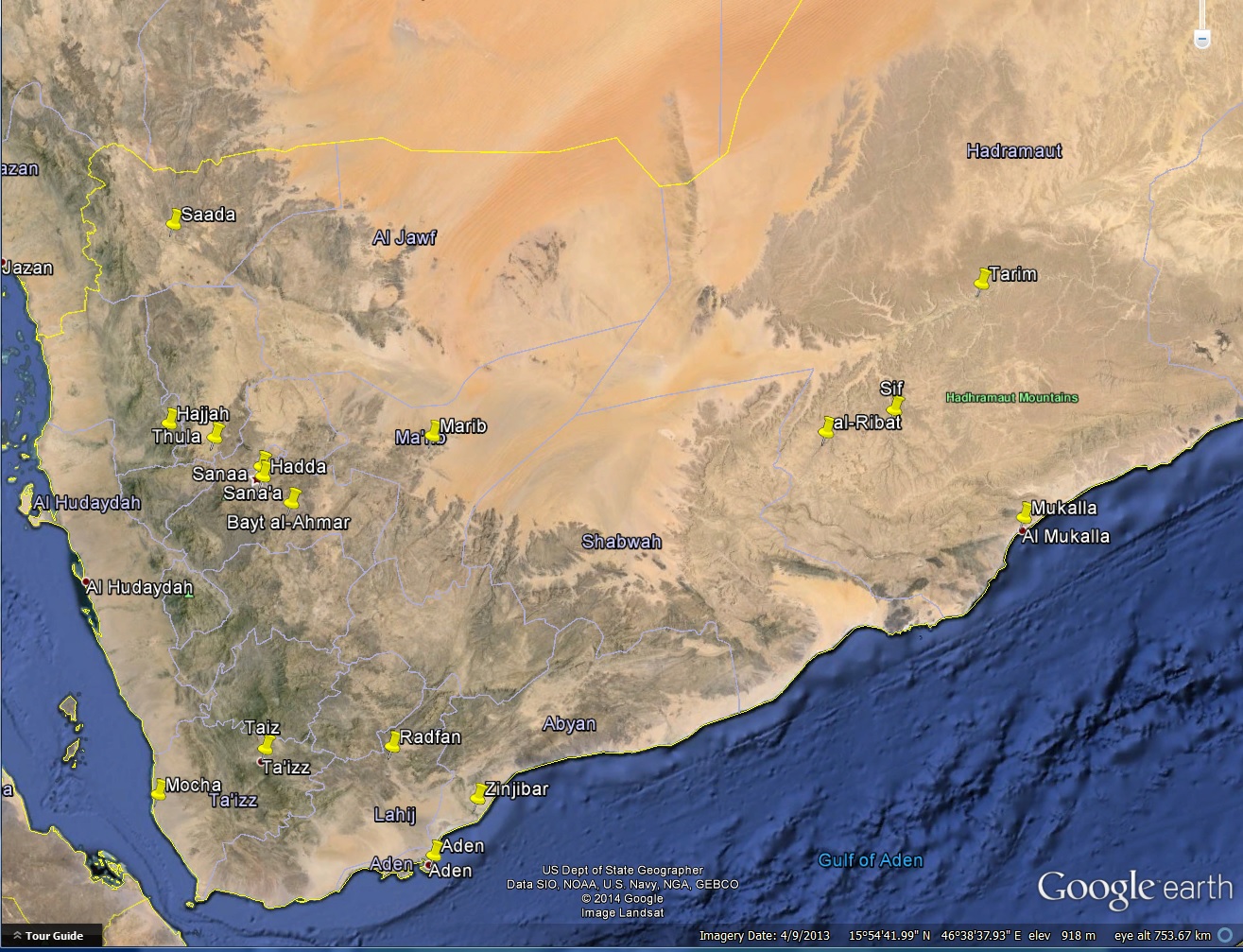 As mentioned at the top of this post, a lot has happened in Yemen since DOTHOS was published. For one thing, President Salih was forced out of power during the Arab Spring in 2011/2012. The author had actually predicted something of the sort would happen:

Salih's dancing on the heads of not only tribal sheikhs but civil servants and qat farmers by buying them, and his turning a blind eye to the black market in subsidised diesel could only continue while he had funds. By the end of 2009 signs that the money was starting to run low were not only visible in the form of aggravated instability but in Yemen's steady climb up the index of failing states... By the autumn, people were beginning to imagine how the touchpaper of collapse could be lit - when he couldn't pay the wages of the military, some said, by 2012 at the latest. (p. 268)

When she was doing the interviews and research for this book, Ms. Clark had a run-in with the authorities and her car was turned back when she was travelling in the Aden hinterland with some prominent southerners (who supported a return to an independent South Yemen). In her analysis, the southern separatist movement was the most serious challenge to Yemeni unity at the time:

Southerners of all kinds - not just the military, or old Marxists like ba-Oom who lost power by unity with the YAR, or intellectuals who fondly recalled the British era, or aspiring oil-workers - were agreed that while they had nothing left to lose, they had a little oil wealth and a lot of dignity and peace of mind to gain by trying to break free of Sanaa again. (p. 242)

She also discusses conflict with Zaydi tribes in the north of the country (around Saada, not to be confused with Sanaa) that was becoming known as the Houthi rebellion. Just in the past few months, the Houthis have more-or-less taken over Sanaa, the capital of Yemen. This development echoes the frequent sieges of the capital by Zaydi tribesmen in the early 20th century. Even though Saleh fought against this rebellion when he was president, he is rumoured to have used his not-insignificant remaining influence to give the Houthis a clear path now.

One event that stood out to me following the Houthi capture of the capital is that they raided the home of a powerful general, who was reported in DOTHOS to have helped arrange transport for would-be Yemeni mujahideen to fight the Soviets in Afghanistan and the Americans in Iraq more recently.

Jihadist activity in Yemen has been an issue for a while, of course. In the not-too-distant past, it was sort of promoted as a counterweight to communism, both in sending fighters to Afghanistan to battle the Soviets, and in creating a thorn in the side of the South Yemen regime. However, the author of DOTHOS sees a lot of counter forces against radical Islamists. These forces are largely the same ones that strain national unity, perhaps to the breaking point—basically, in a country with three times as many guns as people, anyone trying to subdue it all will end up "dancing on the heads of snakes":

The tangled and distinct histories of Yemen's various regions means that there are powerful forces operating against jihadist influence throughout the country. A substantial counterweight in Hadhramaut, for example, is its indigenous Sufi tradition, which has been strongly resurgent since the collapse of the Marxist state in 1990. ... In the Zaydi northern highlands the counterweight is supplied first by a small number of die-hard sayyid Zaydis, the followers of Abdul Malik al-Huthi, who abhor Wahhabism and Salafism of any kind and whose Shiism is detested in return, but secondly by the fact that - as history has demonstrated over and over again - the tribes of Yemen and particularly of the northern highlands care little for ideology or religion and everything for money and land. The same holds broadly true in the tribal lands around Aden, Britain's Western Aden Protectorate until 1967, where there remains a residual regard for British notions of justice and free speech as opposed to those of sharia law, and even for Marxist secularism.

If all these influences pose problems for the spread of jihadism in Yemen, they are also contributing to the strong centrifugal forces that are starting to pull the country apart. (pp. 285-286)

Looking forward, a new challenge could be the price of oil dropping below $70/bbl (at the time of writing). This could make it even more difficult to hold things together as stipends to various sheikhs, wages for soldiers and the civil service, and diesel subsidies start getting cut (oil is the Yemeni government's major source of revenue). Another thing to keep in mind is that, while the upheaval in Yemen this fall hasn't been getting nearly as much media coverage as events in Syria and Iraq, it is taking place in the same context of the Middle East as a whole. The Houthi rebels, for example, are seen as having some alignment with Iran (since they are both Shia) while parts the military establishment might be closer to Egypt in their sympathies.

VICE News did a documentary recently on some of the power struggles in Yemen:

Here is a bagpipe piece called "Barren Rocks of Aden" as a musical accompaniment to this post:

Here are some photos from when I was in Yemen in 2012: 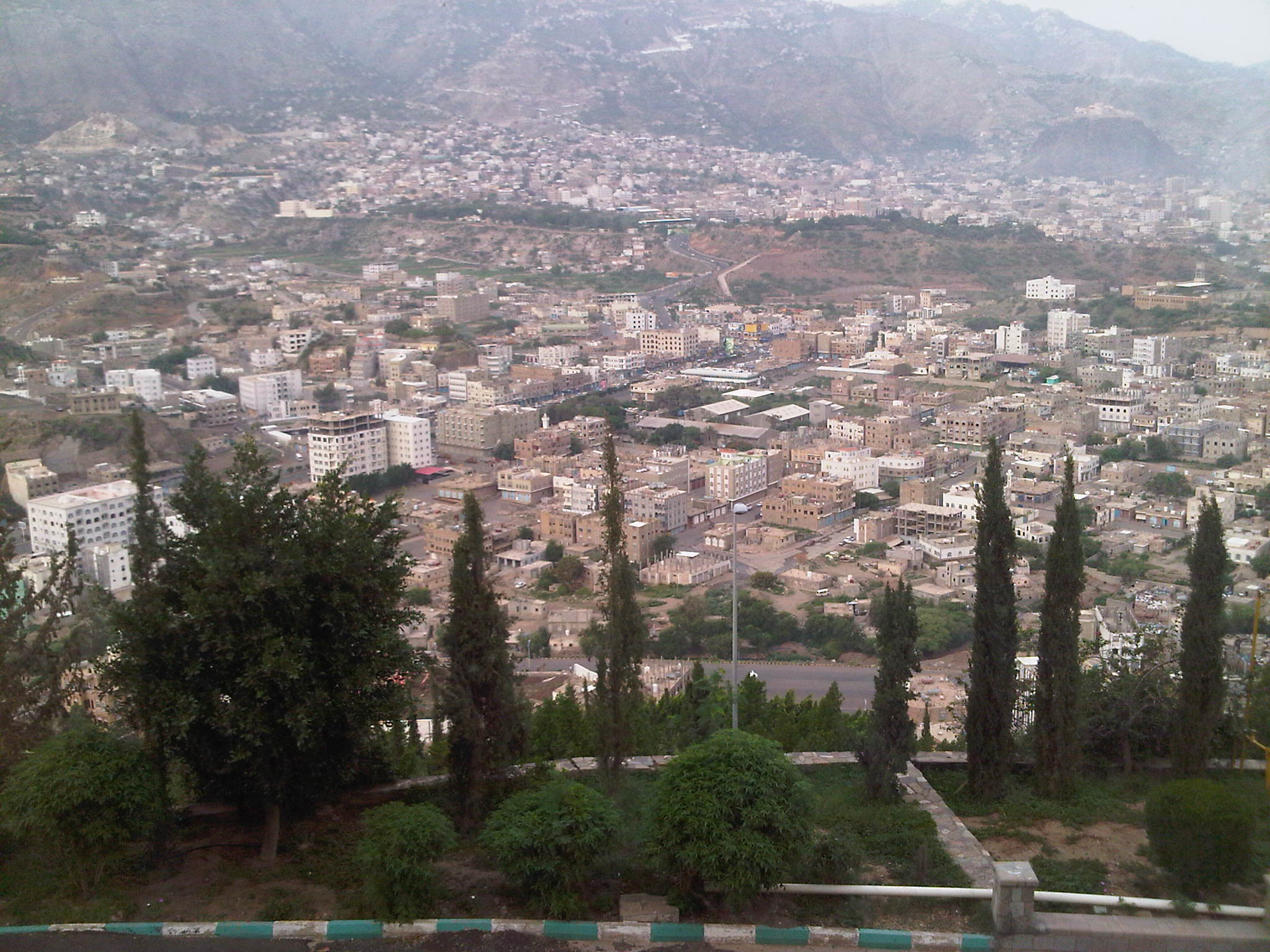 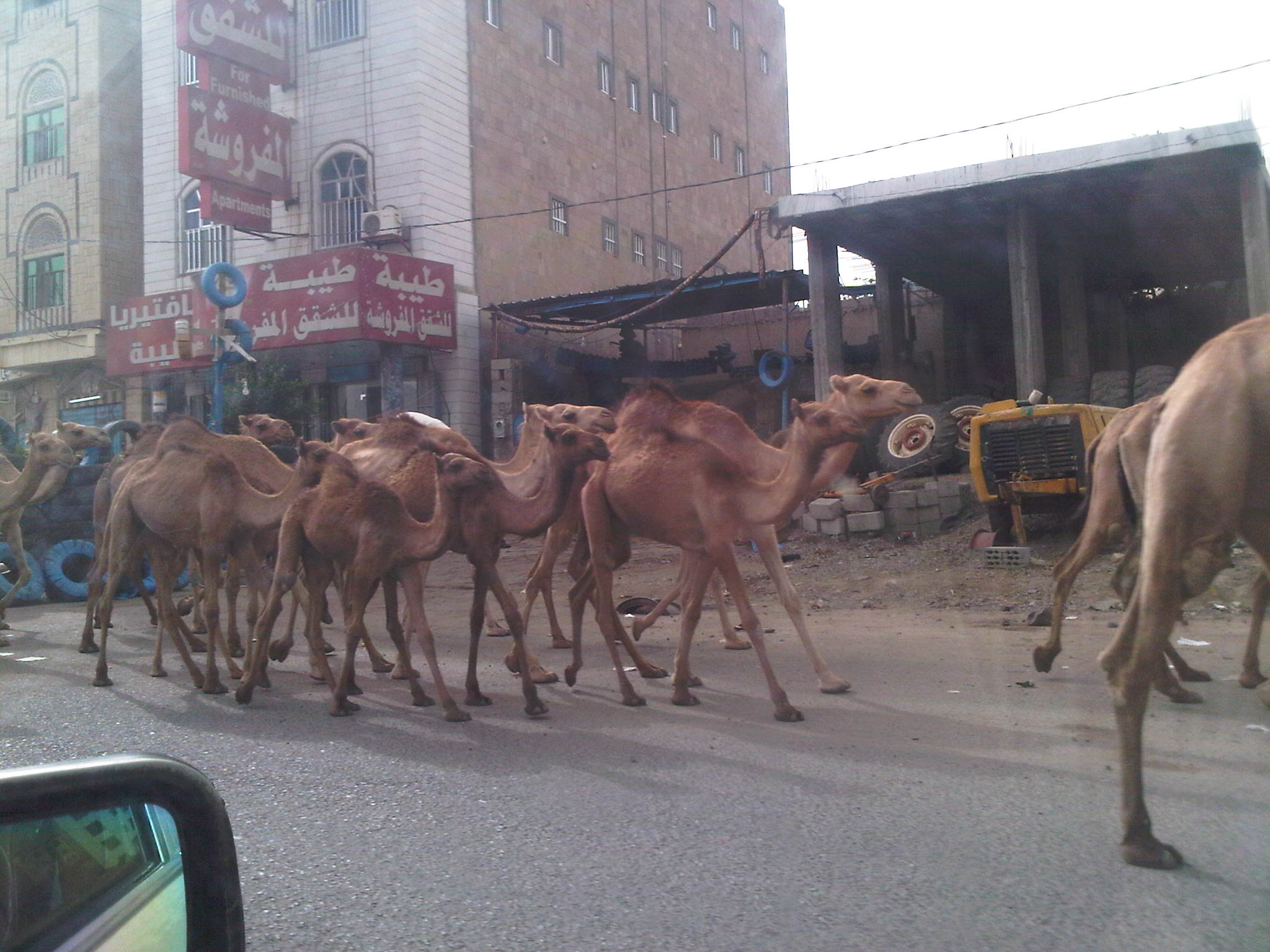 Some sources for updates on the security situation in Yemen include the AEI Critical Threats Project and The Long War Journal.