The Water-Energy Nexus is a concept that puts the spotlight on the relationship between water and energy use from a sustainability perspective. When I was at WEFTEC this year, one presentation included a fantastic graphic on the topic from the US Dept. of Energy (DOE) that I thought was worth sharing.

The full report can be found on the DOE website.

Section 2.2 is where the diagram is located. Below are some excerpts from this section that explain some of the facets of the water-energy nexus:

From the diagram, it is clear that water and energy flows are complex and have many interconnections and interdependencies. The opportunities for large water- and energy-efficiency impacts correspond to large flows within the diagram. As previously described, water is used in the energy system for cooling,
storage, enhanced oil recovery, and hydraulic fracturing. Water is particularly important in the Rankine cycle for thermoelectric electricity generation. Energy is also used in the water system, primarily for pumping and treating public supply and waste water.

Though the intensity varies with both generation and cooling technologies, thermoelectric cooling
dominates the withdrawals of water and agriculture dominates the consumption of water.

As generation and cooling technologies have
evolved over time, the amount of water withdrawn per kilowatt-hour has steadily declined since 1950

Notably, biofuels from irrigated feedstocks have the largest life cycle water consumption, by up to two orders of magnitude.

Here is the diagram: 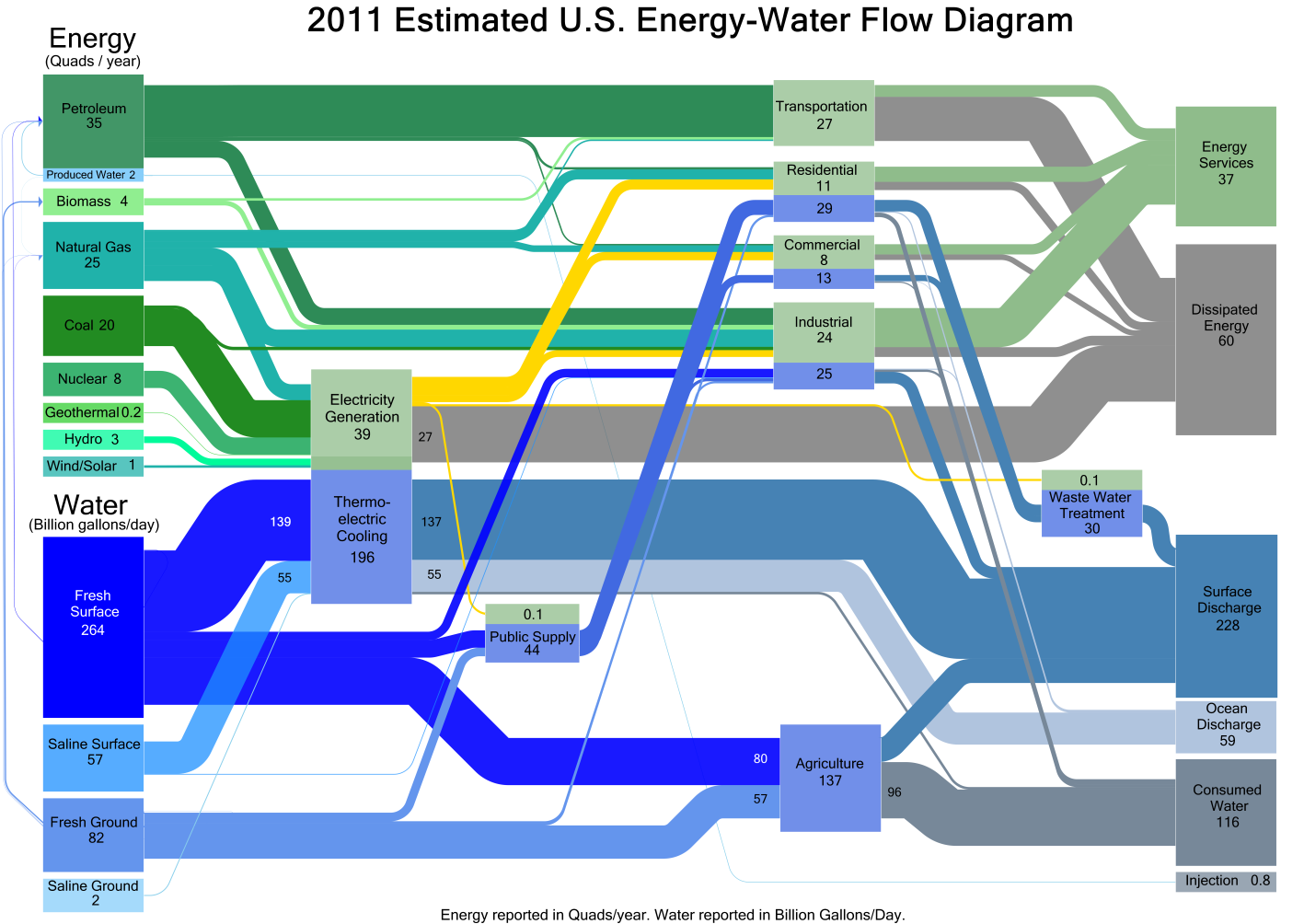 Note that this diagram is from the US DOE and belongs to them; I just wanted to share it as a useful resource.

This type of graphic is known as a Sankey diagram. The widths of the lines are proportional to the water and energy flows that they represent. Boxes on the left are sources and boxes on the right side are sinks; boxes in the middle represent activities that transform or affect these resources.

Sankey diagrams are a useful graphical method for getting a big-picture view of the interaction between flows of some kind (water, energy, money, etc.).

Some other Sankey diagrams can be found here.

More About the Water-Energy Nexus

Using data from Canada's Open Data portal, I made pie charts of water withdrawals and consumption (difference between withdrawals and discharges) for different sectors in Canada in 2009 (latest year available). 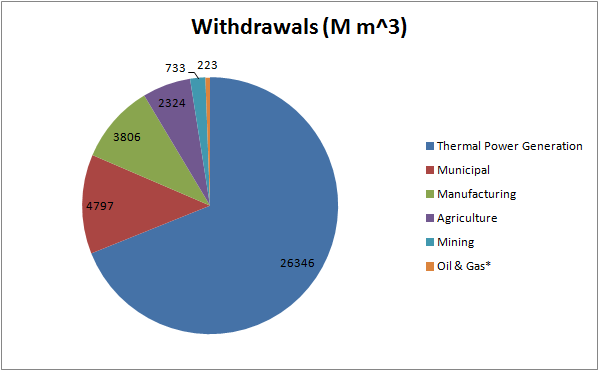 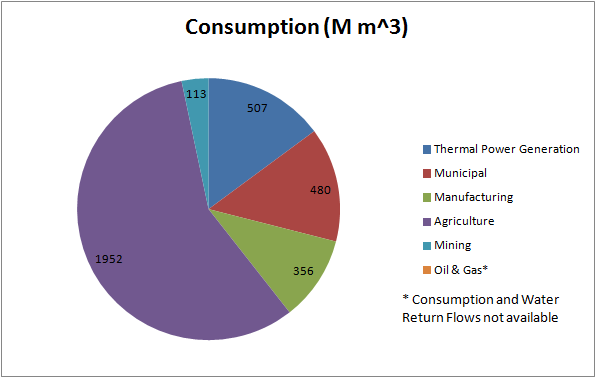 The quantity withdrawn is much larger than the total consumption—most water gets discharged back to the environment, hopefully after proper treatment. Total water consumption from all sectors is less than the withdrawals from the manufacturing sector. Thermoelectric has the largest withdrawals (but water is largely used for cooling in that sector, so it is often returned to water bodies with low impact on quality). On the consumption side agriculture has the biggest impact. For this reason, many people include food for a 3-way water-energy-food nexus.

I've quoted from The World's Water, Vol. 8 before in my post about the Aral Sea and virtual water. It also has some insightful comments on the Water-Energy Nexus (pp. 5–6):

Water systems were often designed and constructed with the assumption that energy would be cheap and abundant, and energy systems were often designed with the assumption that water would be cheap and abundant. ... In the United States, for example, thermoelectric power plants account for nearly 50 percent of all freshwater withdrawals (Kenny et al. 2009). Newly proposed energy sources, such as biofuels, are placing additional strains on local water resources and global food systems.

Some good news comes from the fact that conservation of one resource usually comes with savings for the other. Additionally, there are positive interactions possible, such as energy recovery from wastewater in the form of biogas (Stillwell, Hoppock, & Webber. 2010. Energy Recovery from Wastewater Treatment Plants in the United States: A Case Study of the Energy-Water Nexus. Sustainability 2:945–962) and water reuse (Michael Wilson. 2009. Embodied Energy in the Water Cycle. WEFTEC 2009 pp. 5515–5528).

Environmental Science & Technology dedicated a virtual issue to the Water-Energy Nexus. The Wikipedia article on the subject is also a good source for examples of interactions between water and energy.

Now that it is November, I've come to the end of my month with a professional focus on my blog and plan to return to other topics (e.g. 3D Printing, Book reviews)—and hopefully a more regular posting schedule!