I'm now past the half-way point of Seven Languages in Seven Weeks. This week was about the language Scala. Due to time constraints and interest level, I haven't given it quite as much attention as some of the other languages the book has looked at so far.

It's a hybrid language, meaning that it intentionally tries to bridge the gaps between programming paradigms. In this case, the bridge is between object-oriented languages like Java and functional languages like Haskell.

Its placement in the middle chapter of Seven Languages in Seven Weeks seems very deliberate. Scala is a language that works with object-oriented and functional paradigms. I've gotten some exposure to object-oriented concepts in the chapters on Ruby and Io. The remaining chapters in the book are about functional languages: Erlang, Clojure, and Haskell. My main goal from this chapter was to reinforce some object-oriented concepts and get an introduction to some functional ones, so I didn't mind skipping over a few things (like concurrency) to save time.

Scala ran slower on my netbook than the other languages so far have. I think that's because it compiles everything to the Java Virtual Machine (JVM) before running it.

Here are some useful methods from Scala along with my other notes from the chapter:

Here are some examples of Scala:

One of the examples in Seven Languages in Seven Weeks was to create a class called Compass that knows how to turn left and right around the cardinal directions. Here is a screenshot (from gedit) because I think this one is easier to follow with some syntax highlighting: 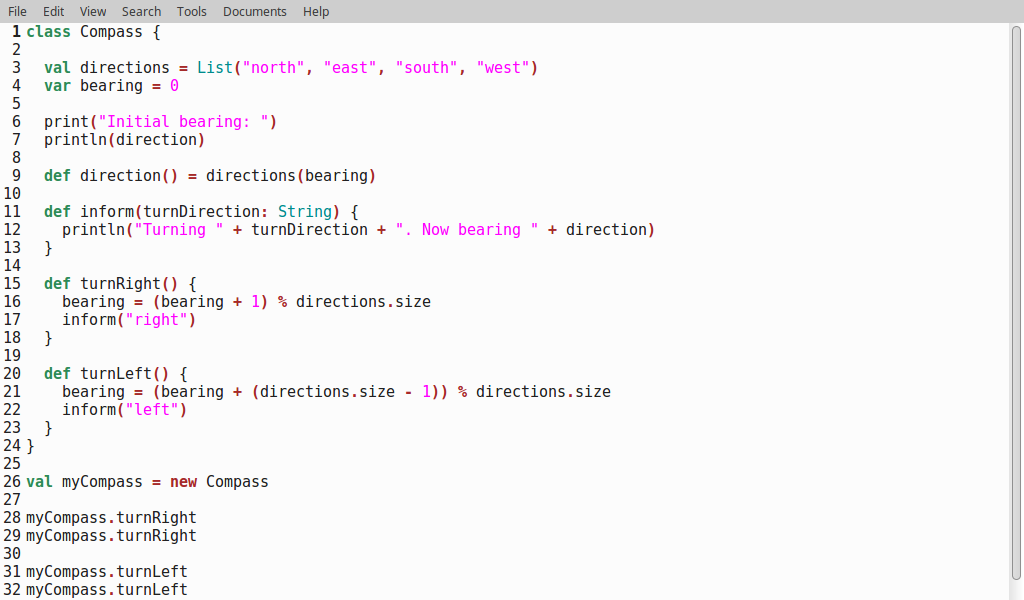 In this example, directions is a list containing the cardinal directions. bearing is a mutable (declared with var) variable that serves as its index. direction() is a function with no argument that simply returns the element from directions at the current bearing. inform() is a function that takes a single parameter (the string "left" or "right") and prints a statement saying what way it is turning and what direction it is facing. It uses + to concatenate some strings. turnRight() and turnLeft() are functions with no parameters. They update the bearing (the index for directions), using the modulus operator (%) to wrap around directions instead of going out of range. At the bottom of the script, a new object is created from the Compass class and the .turnRight and .turnLeft methods are called.

I mentioned above that the .foldLeft method is quite powerful. In honour of Pi Day, I wrote this method to calculate pi by alternately adding and subtracting reciprocals of odd numbers (the Madhava-Leibniz-Gregory method):

This function takes an integer as an argument (the number of terms to include in the series). It creates a range to get the requested number of terms then uses the .foldLeft method to do the calculation. The initial value (1.0) is given then an anonymous function based on the result so far (piByFour) and the current element of the range (term). The modulus operator is used to alternate between +1 / -1 which is then divided by an odd number calculated from the current element of the range. I found it kind of tough to do math in Scala because of the way it infers object types. The math operators were looking for Int or Double types while I was trying to use Float types. Eventually I made everything a Double and got it working.

I really liked the ease of using xml in Scala. I tried the examples in the book on some simplified/contrived kml (kml uses the same structure as xml, just different tags); I've played with kml quite a bit before, so I could really see the potential usefulness here:

places is an xml object. Calling .text on it strips away the tags. places \ "coordinates" shows the node(s) with the <coordinates> tag. places \ "@id"
shows the contents of the id= attribute.

I didn't look for any links for further reading on Scala.

I'm finding it very helpful to see the same concepts/paradigm in multiple languages. After seeing some object-oriented concepts in Ruby, Io, and now Scala I feel like I'm getting a better understanding overall. Classes and code blocks in Scala took less time to pick up on than in Ruby and I don't think that's because the language is simpler. As I look ahead to the final half of the book (functional languages Erlang, Clojure, and Haskell), I'm hoping that the bridge provided by Scala will kickstart the same process of understanding in the Functional paradigm.

This post continues my journey through Seven Languages in Seven Weeks by Bruce Tate. This week's language was Erlang, the first Functional language in the book (although Scala is a hybrid language that incorporates features of the functional paradigm). Week 1 ˙ Week 2 ˙ Week

This post continues my series on Seven Language in Seven Weeks by Bruce Tate. As in the previous posts, I'm going to share my notes on this chapter, including a few excerpts, some significant methods, snippets of code, and links for further reading. Week