A while ago I came across this map that I wanted to share. The guy who made it used freely-available (Yay for open data!) geo-referenced data for every building in New Brunswick. As he points out, even though only buildings are shown, the outlines of the province clearly appear (the data set doesn't extend beyond the borders and people like to build along the waterfront); many internal details such as the location of urban areas and notable corridors. For example, between Fredericton and Miramichi most of the people live along the Nashwaak and Southwest Miramichi rivers (also the route of Hwy 8). North-west and South-east of this line are areas that are very sparsely populated.

It makes for an interesting comparison to my map of the river basins of New Brunswick. The settlement patterns in this province are primarily within the Saint John and Petitcodiac basins, plus the northern and eastern coasts.

The outlines of CFB Gagetown also appear—not because there are no buildings in its territory, but because they would be excluded from a public data set.

The location of every building in the province serves as a proxy for population density, although the relationship is likely non-linear as buildings in urban areas presumably have a higher average occupancy rate. 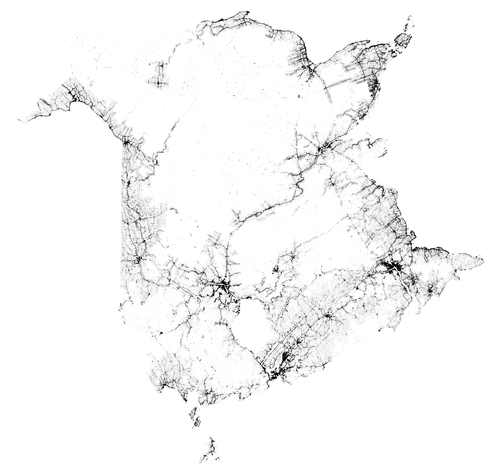 A high-resolution version of this map can be seen here.