As I did the past two years, I went through the New Brunswick provincial budget document that was released today and have some context and analysis to share. In order to keep this tradition useful, I decided to focus a bit closer on one department (Environment and Local Government) this time.

Oh, how we love variance analysis—comparing key numbers month over month, or year over year, or comparing them to plan, to see what's working in your organization and what isn't.

To build on my post from last year, I'll primarily discuss variance in spending and revenue on a year over year basis.

This first graph shows how spending in various departments has increased or decreased. It is calculated as a percentage, so a small increase (2.4%) in Health spending has a bigger impact than a large increase (10%, but only due to how I rounded) in Finance spending since the latter department has a budget of $10.5M compared to $2657M for the former. Tourism is up 15% (an $8M increase), which I think can be mainly attributed to Canada's 150th anniversary celebrations. The Regional Development Corporation has had a significant cut of $38M. The numbers used to make this graph come from p. 16 in the budget document (linked below). 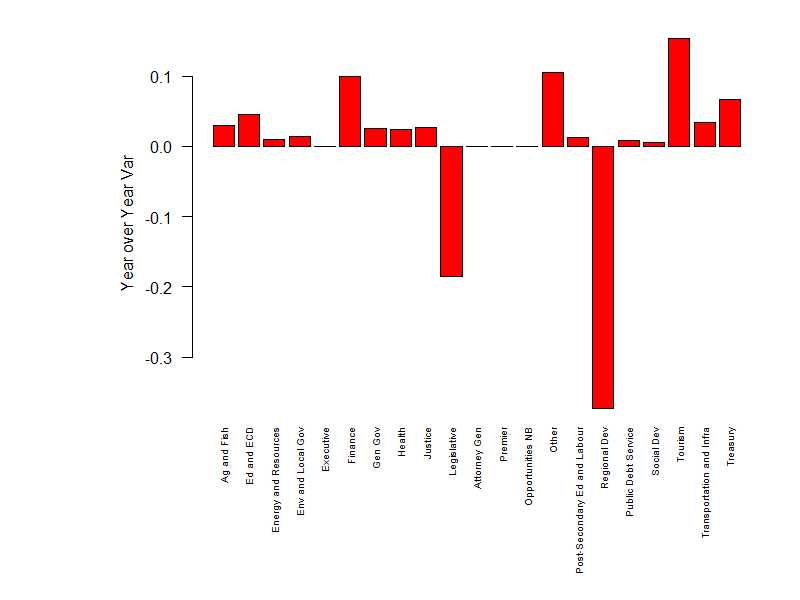 The second graph shows how revenue from various sources has increased or decreased. It is also calculated as a percentage. The revenue from most taxes is expected to increase in the 2017 (and early 2018) fiscal year. The exception is a small projected decrease in gas tax revenue. The big mover is the HST, which is expected to bring in $1419M (up 14%) in the fiscal year ahead; it is the second largest tax (by revenue, not necessarily by rate) after personal income tax. Royalties (largely from timber) are expected to dip by $10M. There is no carbon tax included in this budget. The numbers used to make this graph come from pages 167 – 169 in the budget document. 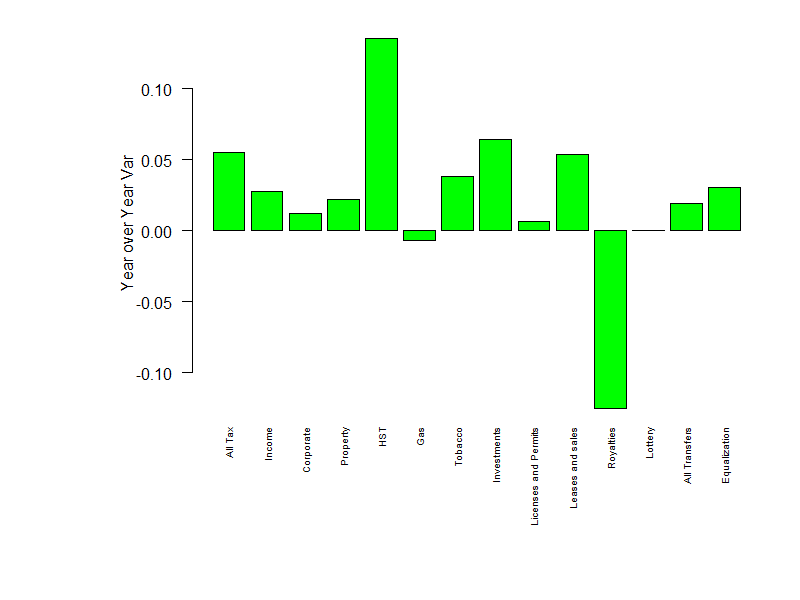 Here are where some of the key numbers stand now (i.e. budgeted for the fiscal year ahead):

The budget is summarized on p. 6 and the debt update is on p. 10. Some things to note are that the debt total at the start of the past fiscal year was revised upwards (after some consolidated financial statements were released—I don't understand all the details here) by $670M, and that the projected deficit for this year is fairly close to the $181M that was in the outlook/forecast in the current government's election platform (see table in this post). Also note that the contingency fund that was in the past two budgets has been dropped. A significant point in my view is that the total expenditures two years ago were $8630M, which is less than current revenue. If the government had been able to hold spending increases lower, then the budget could have been balanced by now without true cuts.

The largest departments by spending are:

On the revenue side, taxes account for $4519M while transfers from the Federal government account for $3061M ($1760M of this is Equalization payments). The remainder of revenue is from things like investments, licenses, fees, leases, royalties, the lottery, etc.

The Department of Environment and Local Government has a budget of $140M in 2017.

The purpose of Local Government programs is,

To serve as the primary point of contact between the Provincial Government and communities (incorporated and unincorporated). To provide
professional financial advice, oversight and reporting services to municipalities, local service districts and rural communities; to build governance capacity at the local level by providing advisory services to municipalities and rural communities; and to provide for the development of community services and the operationalization of programs in the unincorporated areas of New Brunswick through Local Services Managers. (p. 41)

Local government in New Brunswick is a highly-varied topic; some communities are shrinking while others are growing, which means that one single approach isn't suitable. Furthermore, large areas of the province are not incorporated into cities/towns/villages, as this map from Wikipedia shows. 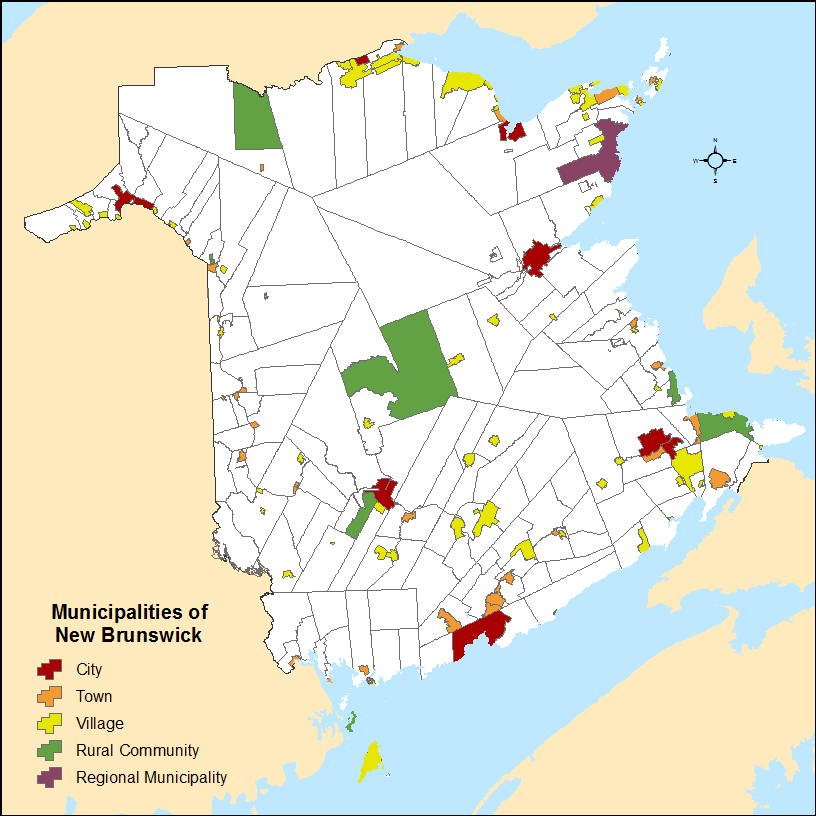 The biggest program spending components for this department are "local service district expenditures" and "community funding and equalization grant for municipalities and rural communities". This article has some discussion of the equalization grant, although the total seems different from what is in the budget ($75M vs $68M, unless a different line item is included that I'm missing).

Provincial property taxes are budgeted for $515M in 2017. This is an issue that really affects local communities. This article explores some of the challenges that small businesses face from commercial property taxes.

I've got to wrap this post up soon, but local government topics in NB certainly could handle further consideration.

(For a look into another department, I discussed some things relevant to Energy and Resource Development at the end of this post).