This post is about flooding, along with some thoughts on public art installations. I made a timelapse .gif of a sculpture along the Saint John River in Fredericton that was designed to show the water level.

Watermark by Gerald Beaulieu is a public art installation in downtown Fredericton. It consists of 11 pillars of varying heights. Ten of them range from elevations (not total height, since the spot where they are installed has an elevation of about 6 metres above sea level) of 6.5 to 8.75 m, in increments of 0.25 m. The eleventh, tallest, pillar has years marked on it representing the levels reached by historical floods. So the number of pillars that are submerged gives an indication of the water level and the tallest pillar allows comparisons to the past. A level of 6.5 m (i.e. up to the top of the shortest post) means the river has officially reached flood stage; 8.36 m is the highest level reached in recent years (2008).

Here is a photo of this sculpture with the river just starting to overflow its banks: 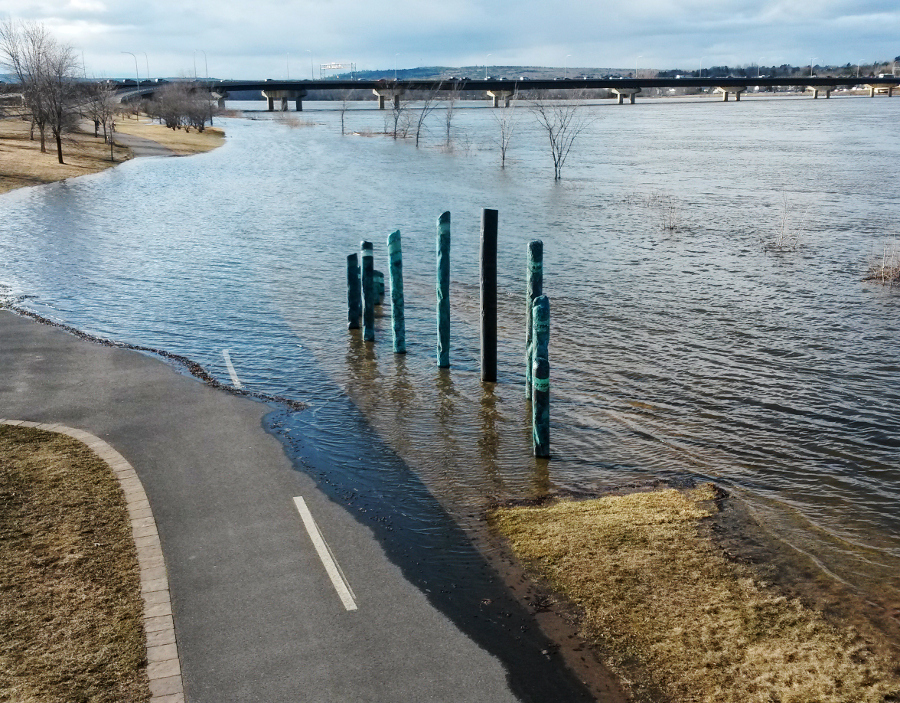 I had the idea to take photos from the same location on a regular basis (I was travelling a bit, but got some pictures a couple of times a week on average) during the spring flooding season then combine them to illustrate how the sculpture interacts with the rising waters. The result was this .gif:

The images that I used to make the .gif were taken between 31 March and 8 May, 2017. The time between images was based on how many days elapsed between when they were taken (0.3 sec allotted per day). I used GIMP to make the .gif; lowering the layer opacity temporarily was helpful to line up the sculpture between frames.

Aside from the changes in water levels, you can see decreasing snow and increasing green, flotsam left at the high water line, and various weather conditions (including a late-April snowfall). This year was thankfully not a serious flooding year in Fredericton—spare a thought and a prayer for people around Ottawa and Montreal who are facing much worse conditions—so only the first pillar and almost the second were submerged. Interestingly, the flood stage of 6.5 m was reached twice this year, falling from the initial peak then rising to a slightly higher one (I think) more recently. If the peaks had occurred at the same time, it could have been more serious. At the time of publication, the water level appears to have stabilized from the second peak, but it could be a while before it subsides due to the amount of rainfall in the forecast.

I like this sculpture. In my opinion, public art installations should be conversant with their surroundings. That is, if they would make as much (or as little) sense no matter where they are installed then I don't see the point of having them as a public installation. There are many ways art can interact with and enrich its surroundings, from memorializing local people or history, to using materials and forms that reflect the local environment, to a dynamic interaction like Watermark. It is uniquely designed for where it is located.

When I was in Edinburgh, I learned that a lot of the sculptures/monuments there had been funded by public subscription. I think funding models that directly engage the public (instead of only funding committees) have a higher chance of producing art that people like and find interesting. (Watermark was commissioned by the City, I believe, and seems to be well-received, but it isn't hard to find publicly-funded art installations that have no discernible significance and little appeal). I feel that the rise of crowd-funding sites could be a really positive thing for art as they both raise money and engage audiences. Kickstarter, for example, raised over $400M in 2016 for projects in art/cultural categories (compared to a budget of around $150M for the U.S. National Endowment for the Arts). An art project I made a small contribution to is 23 Days at Sea. It was a residency, but I've also seen some public installation art projects on Kickstarter.

Here are some additional links about flooding on the Saint John River: