I was inspired to learn more about the history of religious orders after visiting an abbey in Scotland and while planning a trip to France. I read a book called The Lord as Their Portion: The Story of the Religious Orders and How They Shaped Our World by Elizabeth Rapley; this post is based on things I learned from it and from travelling (augmented by Wikipedia). My apologies for not having a post last week: it's been a busy time with my job, including a few days on the road

p.s. Here is another link related to my previous post.

The title of this post comes from the fact that a number of places in the U.K. are named after religious orders that had a presence nearby (e.g. Blackfriars Bridge in London).

The Lord as Their Portion (abbreviated TLATP below) by Elizabeth Rapley covers the history of Catholic religious orders. It is mainly focused on continental western Europe (especially France and Italy—which are where many of the most prominent orders started) so Celtic monasticism and the Desert Fathers are only discussed in passing; Dr. Rapley is a Canadian and remarks that she wishes she had more space to discuss the history of religious orders in this country. She gives relatively equal coverage to female orders, but this post would be way too long if I got into that. Because of the importance of the Church in western European history, I found that this book mentioned a lot of the important historical events and developments there to put the history of the religious orders in context.

The introduction summarizes the development of Catholic religious orders in western Europe:

When, inch by inch, western Europe emerged from its Dark Ages, much of its developing dynamism came from them. There was nothing they did not turn their hand to. The building and adornment of churches and cathedrals, the copying and illumination of the written word, the development of new techniques in agriculture and animal husbandry: all these achievements bore their imprint. Then, as society matured and settled down, their services expanded and became more complex. They preached, taught, nursed the sick, championed the poor. Above all they explored, and advanced, the faith. ...

It was close to a millennium after the birth of Jesus Christ before the germ of a religious order — a collection of monasteries that owed allegiance, in feudal fashion, to one supreme abbot — appeared. This was Cluny. After that things moved faster. Within two hundred years, a sort of federal system was worked out, in which participating monasteries remained independent but accepted correction from each other, and oversight by a central abbot in concert with a general chapter. With that, a true religious order came into being. This was the Cistercian order, the model many subsequent orders would come to imitate. ...

Then, in the thirteenth century, there appeared a new tribe of religious persons, the friar. Consciously, audaciously, these men took their religious life into the world, contending that God is served best when prayer is combined with the saving of souls, in what they called "the mixed life." (pp. ix – xi)

One thing that wasn't clear to me before I read TLATP was some of the
terminology around religious orders: What are the distinctions between hermits, monks, friars/mendicants, clerks, and canons?

Monasteries, as expressions of the aspirations of the medieval world, had been built on the principle of flight from the world; friaries, responding to the changing spirit of the high Middle Ages, were built within the world, but also served as sanctuaries to which their members could withdraw, though temporarily, from its entanglements. Divine office and community life were seen as antidotes to the contamination that came from association with the world. Now a new form of religious life was to develop, which was ready to engage more aggressively with the world. "Leaving God for God" would be its rallying cry. ...
And so charitable confraternities appeared in several Italian cities: centers called "oratories" where clergy and laity — men and women — joined together to deepen their spiritual life with communal prayer while, at the same time, ministering to the poor...
These men came to be known as "clerks regular". (p. 127 – 128, emphasis added)

Canons and hermits aren't mentioned in this particular excerpt. Unlike monks (especially those sticking to the original Rule of Benedict), canons were all priests and not cloistered since they had duties in the community under the direction of their bishop. Moreover, most did not take vows of poverty. Hermits lead more solitary lives, although some are members of religious orders.

Over time, a lot of the boundaries between these different types of religious orders blurred (e.g. mendicant orders no longer stuck to itinerant lifestyles, and monks took on more community engagement). In general, members of the religious orders take 3 vows: poverty, chastity, and obedience (to a superior)—although there are many variations.

The Rule of St. Benedict was one of the first to be widely adopted. Ora et labora (pray and work) is a motto that sums up this mode of monastic life.

Given the future history of Christian monasticism, it is important to note that Benedicts's monks were not expected to be useful to society, either by teaching or by preaching or even by intercessory prayer.

The Benedictine Order is known as Black Monks due to the colour of their habits.

The Cistercian order is one that I find most interesting, because of their influence and legacy. They had innovations in governance (an early example of an effective international organization), metallurgy (mentioned in a book I read on the Industrial Revolution), and agriculture:

[The Cistercians] were not only good farmers, they were good farmers who did not consume all they produced. As long as the Cistercians kept to their austere way of life, they found themselves with surpluses. It did not take long for these surpluses to make their way into the market, first of grain, and then of wool. (p. 27)

I've been to two Cistercian sites: Citeaux (near Dijon) and Melrose in the Scottish Borders. The former established the Clos Vougeot vineyard and the latter was active in the wool trade.

They were known as white monks (not to be confused with whitefriars, which are Carmelites).

Later on, the Trappists (famous for their cheeses these days) split off from the Cistercian order.

Dominicans, also known as Blackfriars, were founded by St. Dominic. He was a great speaker and debater, and the order focused on preaching, informed by study. They were active in early European universities and had many notable scholars in their ranks; St. Thomas Aquinas was a Dominican.

The order started as canons, but became friars.

TLATP includes a pun about the Dominicans: Domini canes = the hounds of the Lord. This is in reference to their role in the Inquisition. One thing that occurred to me while reading this book is that each order had its own strengths and distinctive emphases, and many of them developed weaknesses corresponding to their strengths. In the case of the Dominicans, they were noted for their intellect, doctrinal correctness, and zeal, and went on to participate in the Inquisition.

The Dominicans (and Cistercians) were also involved in the Albigensian Crusade against the Cathars.

The Franciscans, also known as Greyfriars, were founded by St. Francis of Assisi. He was widely respected for his commitment to poverty among other reasons, which set the tone for the order.

The Capuchins (whose habit gave the name to a type of monkey) are an offshoot of the Franciscan order.

The Rule of St. Augustine was applicable for community life for canons (i.e. ordained clergy). There are both canons (canons regular) and friars known as Augustinians. Martin Luther was an Augustinian friar.

The Jesuits were established later than many of the other prominent orders. They're an order of clerks regular. Their activities as court confessors and in running schools (training many members of courts) gave them a reputation for secretly running society. They were actually suppressed (except in Prussia and Poland and Russia) from 1773 – 1814. Some of the early Jesuits were famous missionaries to Asia.

Here are some monasteries I visited in France: 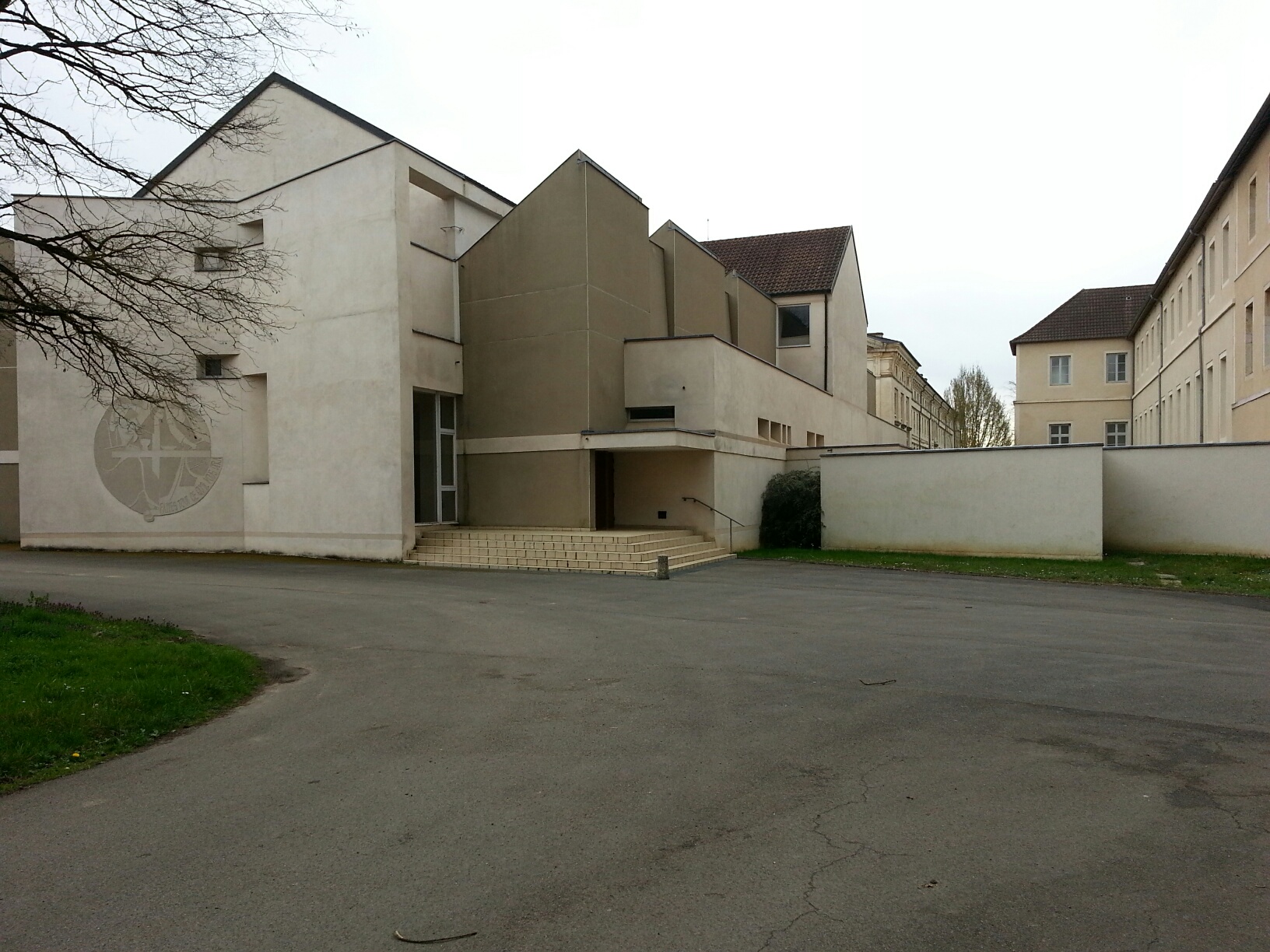 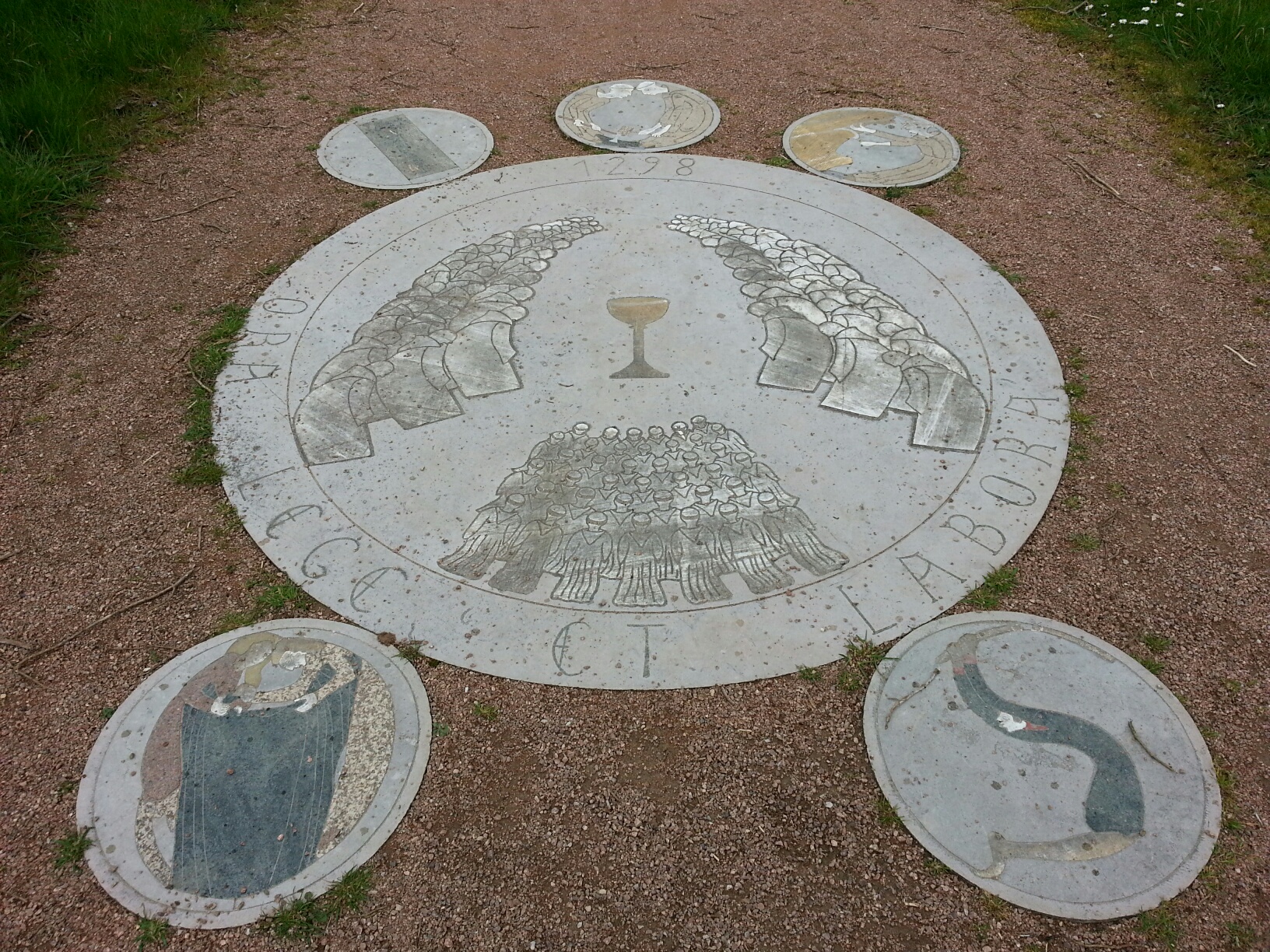 At Citeaux Abbey, there is a walk with seals in the ground illustrating the conditions of the monastery over the centuries. This one reads "Ora, lege, et labora" (pray, read, work). 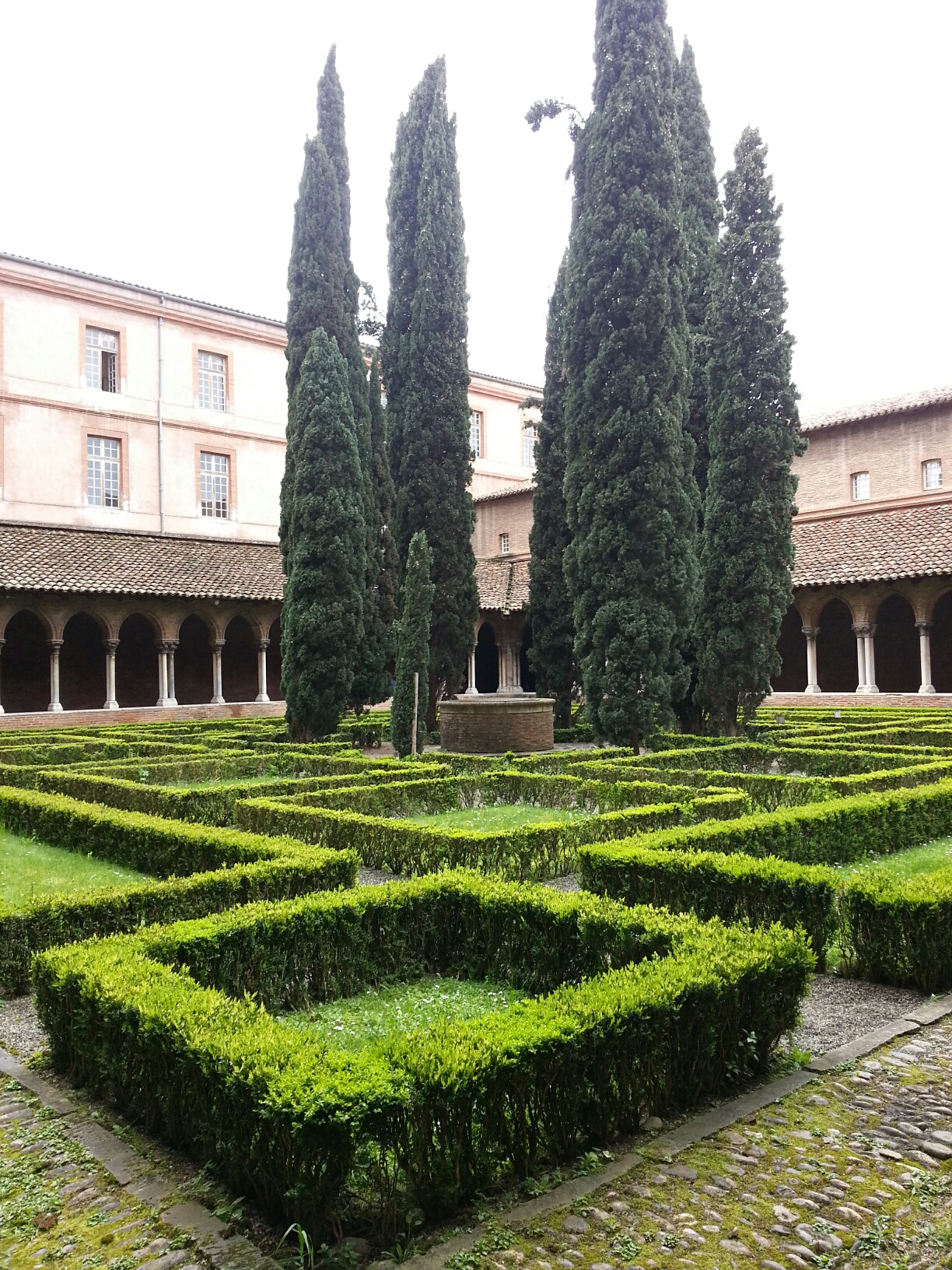 This is the Jacobins' (an alternative name for Dominicans in France) cloister in Toulouse. 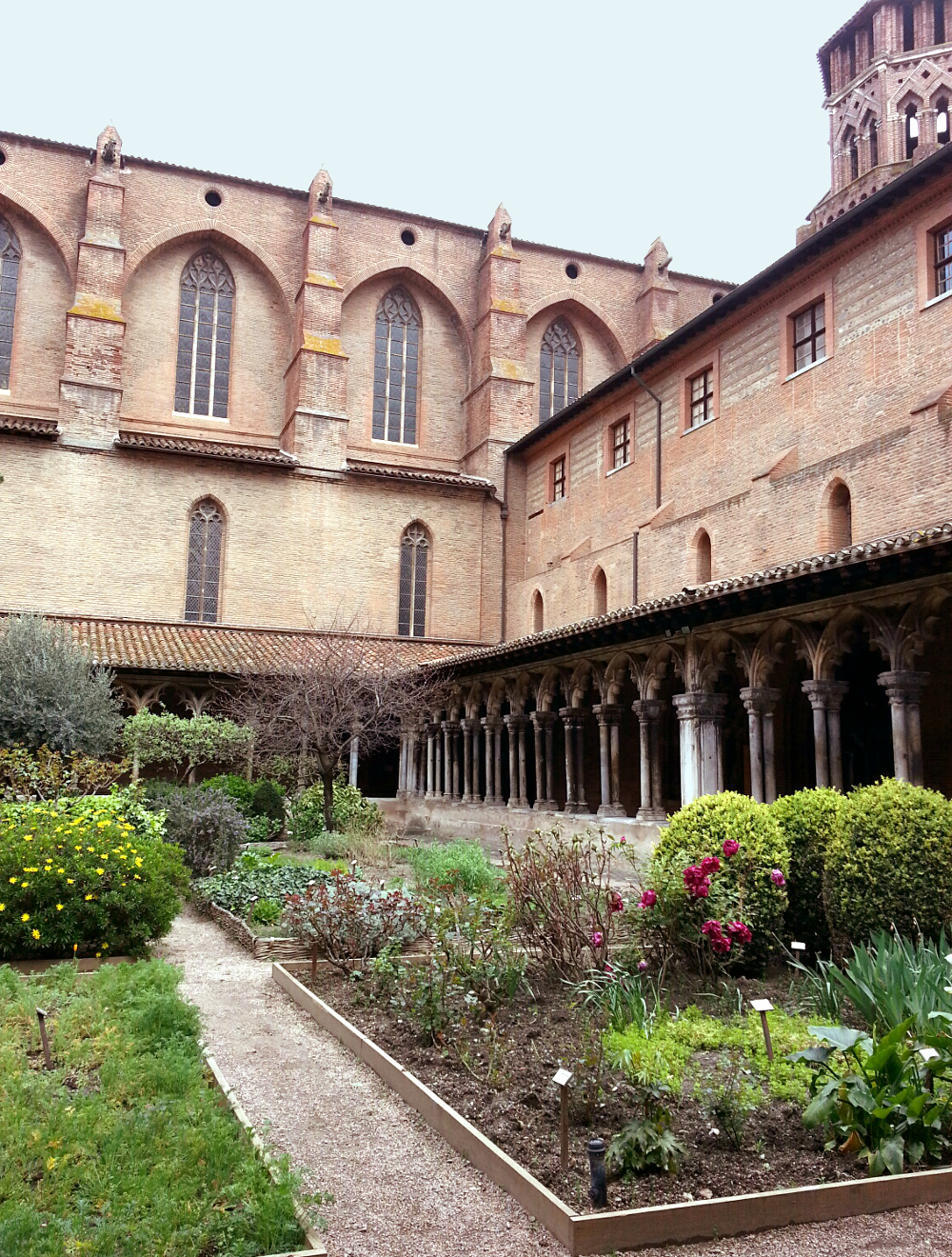 This is an Augustinian cloister in Toulouse. It is now an art museum.

Finally, here are a few other interesting facts from TLATP, along with related ideas I've had about monks: