I wanted to understand the history of the Middle East better, so I made the following timelines. Hopefully some readers will find them informative, too.

If you turn on the news, you can see ancient cities like Aleppo, Sana'a, and Mosul being ravaged by war. The present conflicts did not come out of nowhere—rivalries between Arabs, Turks, Persians, and outside powers have been a recurring feature of the region. Understanding some of the history can make the present a little less mystifying (maybe). Plus it's fascinating in many ways for its own sake.

History occurs in 4 dimensions; it has spatial and time-based aspects. This makes it hard to visualize. In this post, I've drawn timelines for a number of different cities stretching from North Africa to Central Asia and placed them in parallel. This allows seeing what was going on along the shores of the Mediterranean at the same time Genghis Khan was pushing through Central Asia, for example.

To orient the following timelines, here is a key map (adapted from a file on Wikimedia) showing the locations of the cities I used: 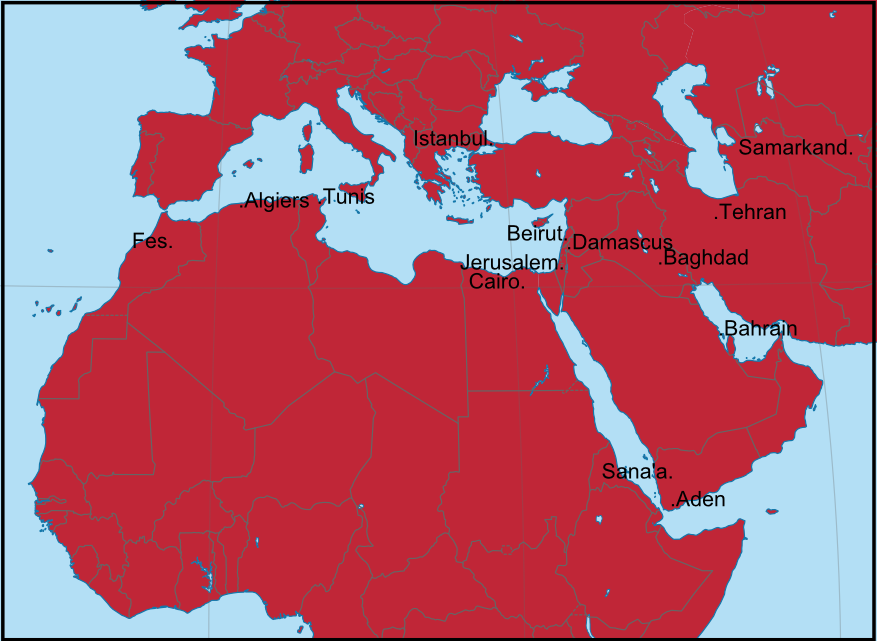 I tried to pick cities that have long histories (so places like Dubai and Tel Aviv didn't make the cut). Some of the timelines also include a few events from nearby places (e.g. Kairouan with Tunis, Kufa with Baghdad, Rey with Tehran, Bukhara with Samarkand).

The timelines start with the assassination of 'Ali ibn Abi Talib in 661 A.D. and the subsequent start of the Umayyad Caliphate ('Ali was the fourth and last Rashidun Caliph, while the Umayyads had the first dynastic caliphate). They end with the end of World War One and the dissolution of the Ottoman Empire around 1920.

For each city, I've included the timeline followed by some links to people, places, events, etc. that were mentioned; general reference pages are linked in a section at the end. My source for this post was Wikipedia.

I made the timelines using Inkscape, as I've done for some other infographics on my blog (see 1, 2, 3). I think I uploaded a suitable resolution to read, although you may need to zoom in or open the images in a new tab, especially if you have a small screen.

There are a few interesting things I noticed in preparing these timelines:

I could have included more cities, but I think I achieved decent coverage with the ones I selected.