I'm continuing to work my way through books that I picked up on vacation. This post is a review of Waves and Beaches: the dynamics of the ocean surface by Willard Bascom. (I've been really busy with other stuff lately, but I hope to return to my regular blogging schedule soon).

Willard Bascom (who directed the first phase of Project Mohole among many other accomplishments) wrote Waves and Beaches as part of the Science Study Series. It is a delightful little volume. His passion for the topic shines through when recounting fun memories surveying surf zones in a Dukw amphibious vehicle. In addition, it lives up to its title by providing clear and understandable descriptions of the dynamics of waves and beaches.

The writing is not only clear and descriptive, but is a bit poetic in places. The prologue describes the battle—or dance—between the land and the sea:

But the land defends itself with such subtle skill that often it will gain ground in the face of the attack. Sometimes it will trade a narrow zone of high cliff for a wide low beach. Or it may use some of its beach material in a flanking maneuver to seal off arms of the sea that have recklessly reached between headlands. The land constantly straightens its front to present the least possible shoreline to the sea's onslaught.
When the great storm waves come, the beach will temporarily retreat, slyly deploying part of its material in a sandy underwater bar that forces the waves to break prematurely and spend their energies in futile foam and turbulence before they reach the main coast. When the storm subsides, the small waves that follow contritely return the sand to widen the beach again. Rarely can either of the antagonists claim a permanent victory. (p. 1 – 2)

In this post, I'll basically be going through things I learned from reading the book. I focused on the material related to wave dynamics; the parts about beach dynamics seemed interesting as well, but it would require a second read through to really absorb.

The central insight I gleaned from Bascom's Waves and Beaches is that different kinds of waves—everything from ripples, to swell, to tides, to tsunamis—exist on a continuum; they have differing periods but are governed by the same laws. Longer waves (in terms of period or wavelength) can carry more energy.

The generalized equation for the speed (C) of surface waves is:

In this equation, d denotes the water depth and L is the wavelength (distance from crest to crest). g stands for gravitational acceleration and T (not used here) is the wave period (time between crests). tanh is the hyperbolic tangent. The equation can be simplified as follows for deep and shallow waves:

Note that tides and tsunamis are always in "shallow" water (from their perspective); other waves will start to "feel" the bottom when d/L = 0.5. As waves reach shallow water, their speed (and length, since period will stay constant) decreases, leading to breaks as the steepness increases to H/L = 1:7.

The book has numerous useful tables and figures, such as a tabulation of wave periods, their corresponding lengths and velocities in deep water, and the depth at which they become shallow waves.

I learned that waves have a trochoidal form and that individual water particles trace out circular orbits rather than being translated significant horizontal distances, except when waves break. At the surface, the diameter of these circular orbits is H (the wave height), but they get flattened to H/2n
at a depth of n˙L/9.

Here is an elegant description of how waves form:

... a long wave can accept more energy and rise higher than a shorter wave passing under the same wind. Therefore, as the sea surface takes energy from the wind, the small waves give way to larger ones, which can store the energy better. But new ripples and small waves are continuously being formed on the slopes of the existing larger waves. Thus in the zone where the wind is moving faster than the waves, there is a wide spectrum of wave lengths. At the same time, however, the longest waves continue to accumulate energy from the smaller waves. Although the wind produces waves of many lengths, the shortest ones reach maximum height quickly and are destroyed while the longer ones continue to grow. (p. 43 – 44)

The "fetch" is the length over which the wind blows before the seas reach a fully-developped wave condition.

Wave spectra are characteristic curves showing energy stored at each wave length. Unlike experimental wave tanks where many of the fundamental equations above were derived, in the wide oceans, waves of different periods will all be superimposed, necessitating a statistical approach. However, as the total wave energy increases, longer-period waves will predominate.

An interesting type of waves are seiche waves, caused by resonance in a fully- or partially-enclosed basin. The following equations give the resonant periods, where n = the harmonic number (0 for fundamental):

Another valuable inclusion in Waves and Beaches was the description of a graphical method for analyzing how waves will impact the shore:

... refraction diagrams are very useful in visualizing how waves of various periods and directions will influence a shoreline or a proposed coastal structure.
There are several methods of drawing refraction diagrams; all begin with an accurate contour chart of the bottom configuration out to a depth of half of the longest wave that will be considered. Then the period and direction of the waves to be diagramed must be selected. The practicing coastal engineer will prepare diagrams for waves of many periods and directions, but usually he will also make a statistical wave hindcast. That is, he will make estimates of wave heights and periods based on historic weather maps to obtain statistics on what waves have arrived in the past and are likely to arrive in the future. One of these waves is likely to be predominant, and he will start with in—on much of the U.S. West Coast, it is often a twelve-second wave from the northwest. Now he proceeds by drawing a straight line representing a wave front in deep water... In the wave-front method it is customary to calculate the new, somewhat reduced wave length for each contour depth and to use these to step off the advance of the wave front. The resulting diagram shows the successive positions of the wave front at time intervals equal to the period. As the wave slows down, the wave fronts get closer and closer together.
The principal question answered by a refraction diagram is: How is the wave energy distributed when it reaches the coast? If the [straight] deep-water wave front is divided into equal parts and wave rays are drawn through these perpendicular to each wave front [bending as necessary], the energy distribution is readily seen [i.e. concentrated where the rays squeeze together]. These wave rays separate areas of equal energy and are called orthogonals. The ratio of the length of the wave crest between orthogonals in deep water to that at the beach is the refraction coefficient. With it, one can compare the amounts of energy reaching various points along the coast and determine the effectiveness of proposed breakwaters. (p. 73 – 74)

Here are some key principles:

The back half of the book deals with conditions in the surf zone and on beaches. As alluded to above, breakers create waves of translation, not just oscillation. This makes them dangerous since they can introduce relative motion against boats and put a lot of pressure on pilings and breakwaters.

Breaker conditions are when H > L/7 or d = 1.3˙H (L will shorten as d decreases, causing waves to get steeper in shallow water). Even out at sea, you can get some stochastic whitecaps in strong winds as some superpositions will occur with a slope > 1/7.

Ship wakes are a type of wave, too. They take energy from the ship as it moves through water. Surfers (and dolphins) can take energy from waves (including wakes). Surfing works when the resultant vector from gravity, buoyancy (normal to the wave front), and hydrodynamic drag points in the forward direction.

As I said in the introduction, I'm not going to really get into the beach portion of the book in this post. It did have lots of interesting things to say about beaches, such as onshore-offshore sand transport—I learned that sand often cycles seasonally, between wide beaches in the summer and submerged bars in the winter. No wonder the Bouctouche boardwalk has suffered damage in some winter storms.

A handy guide for things to observe at the beach is also included in this book (p. 172).

In closing, I'll offer a direction for further education on ocean dynamics. Waves and Beaches focused on linear waves, not eddies which are relevant to the scale of mixing processes (see here and here).

Finally, here is a photo I took in Olympic National Park in which you can see waves that are going in two directions superimposed: 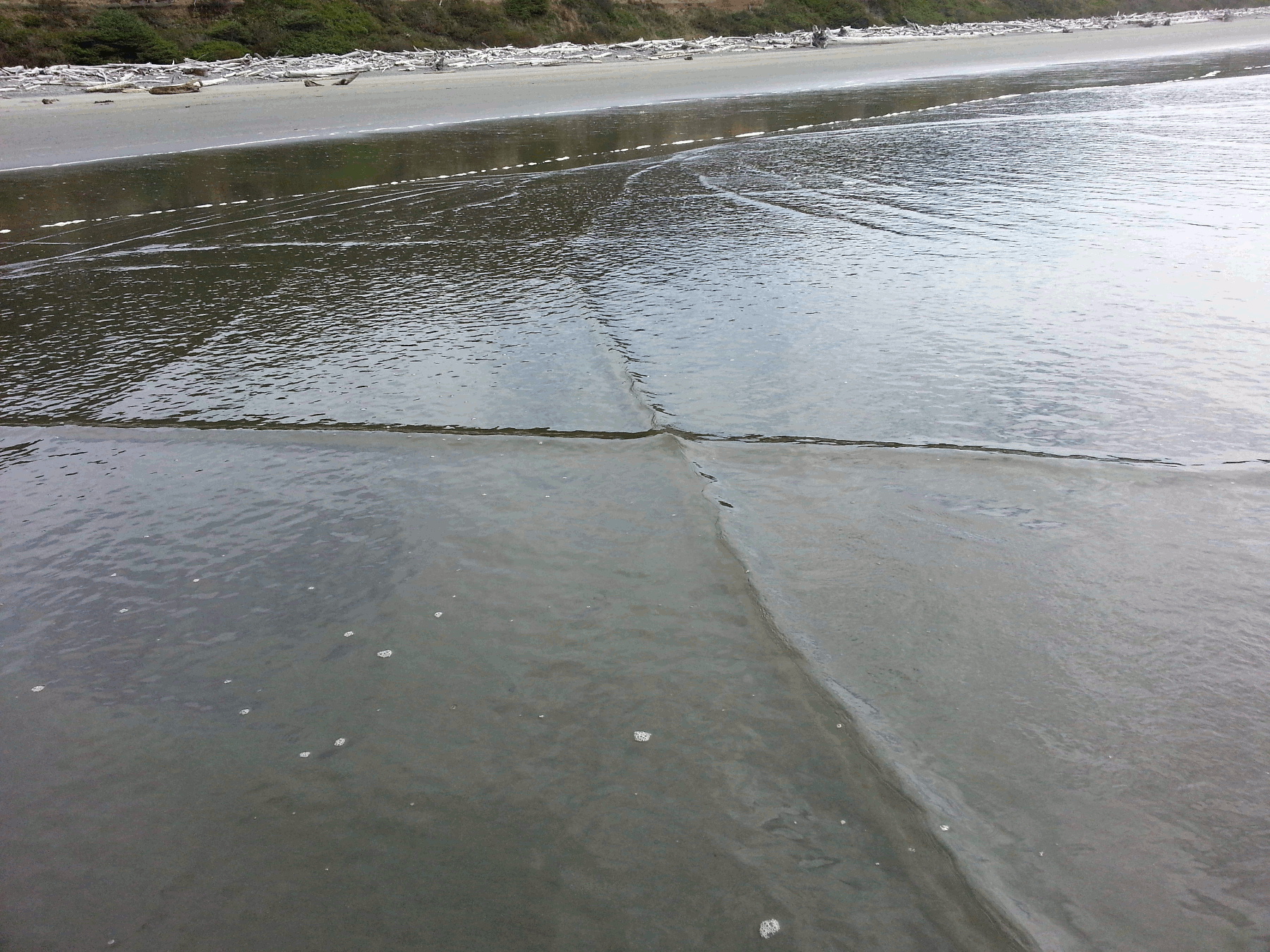