Some poetry, some history, and some Maritime scenery.

At the end of September, I took a detour to Grand Pré after a weekend in Halifax. The landscape there is a UNESCO site, in recognition of the Grand Dérangement.

On October 8, 1755, the inhabitants of Grand Pré were loaded onto ships for deportation, following a month during which the men of the community were imprisoned in the parish church. The British were worried that Acadian loyalty would be a weak point in colonial wars in North America. See here for more of the history.

This event, and the separation of family and friends that it caused, became the basis of the narrative poem "Evangeline" by Henry Wadsworth Longfellow (he also wrote "I heard the bells on Christmas Day"). I read this poem this summer. It follows the anguish of a young woman who is separated from her fiancee. It also has some lovely descriptions of the landscape:

IN the Acadian land, on the shores of the Basin of Minas,
Distant, secluded, still, the little village of Grand Pré
Lay in the fruitful valley. Vast meadows stretched to the eastward,
Giving the village its name, and pasture to flocks without number.
Dikes, that the hands of the farmers had raised with labour incessant,
Shut out the turbulent tides; but at stated seasons the flood-gates
Opened, and welcomed the sea to wander at will o'er the meadows.
West and south there were fields of flax, and orchards and cornfields
Spreading afar and unfenced o'er the plain; and away to the northward
Blomidon rose, and the forests old, and aloft on the mountains
Sea-fogs pitched their tents, and mists from the mighty Atlantic
Looked on the happy valley, but ne'er from their station descended.
There, in the midst of its farms, reposed the Acadian village.
Strongly built were the houses, with frames of oak and of chestnut,
Such as the peasants of Normandy built in the reign of the Henries.

Here is a photo I took of this landcape, from the look-out on Old Post Rd.: 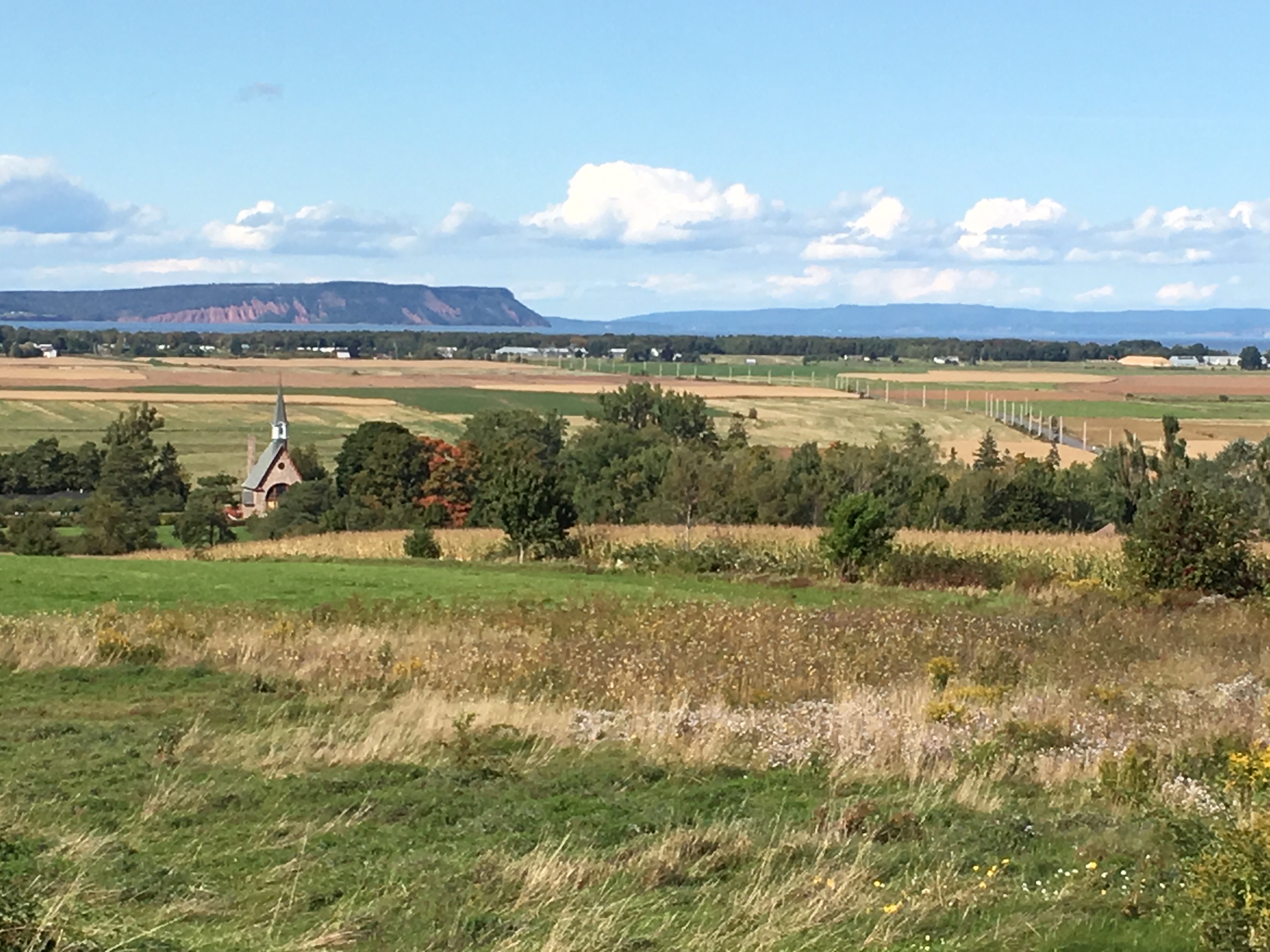 The Minas Basin, reaching toward Truro (and Debert) from Chignecto, is the part of the Bay of Fundy with the highest tides. These are referenced in some evocative passages in "Evangeline":

Soon she extinguished her lamp, for the mellow and radiant moonlight
Streamed through the windows, and lighted the room, till the heart of the maiden
Swelled and obeyed its power, like the tremulous tides of the ocean.

Half the task was not done when the sun went down, and the twilight
Deepened and darkened around; and in haste the refluent ocean
Fled away from the shore, and left the line of the sand-beach
Covered with waifs of the tide, with kelp and the slippery sea-weed.

(The latter selection provided the title for this post).

Grand Pré includes over a thousand hectares (2,500 acres) of land that is below high tide water level. It was reclaimed as extremely productive agricultural land from a salt marsh using dikes and aboiteaux (one-way sluices that let water out at low tide but stop backflow at high tide. This page has more about the reclamation process (also see a post I wrote about land reclamation in the Netherlands) .

Since it's fall, I wanted to share this description of the season from "Evangeline":

Bees, with prophetic instinct of want, had hoarded their honey
Till the hives overflowed; and the Indian hunters asserted
Cold would the winter be, for thick was the fur of the foxes.
Such was the advent of autumn. Then followed that beautiful season,
Called by the pious Acadian peasants the Summer of All-Saints!
Filled was the air with a dreamy and magical light; and the landscape
Lay as if new-created in all the freshness of childhood.

To wrap this post up, here's an excerpt from "To Autumn" by Keats, a poem about fall that I quite appreciate:

To bend with apples the moss'd cottage-trees,
And fill all fruit with ripeness to the core;
To swell the gourd, and plump the hazel shells
With a sweet kernel; to set budding more,
And still more, later flowers for the bees,
Until they think warm days will never cease,
For summer has o'er-brimm'd their clammy cells.