This weekend I went to a couple of art exhibits and I decided to share a bit about them below.

On Saturday, I went to Saint John for the day. I got lunch at the City Market, wandered around Uptown for a while, visited the New Brunswick Museum, and went for a stroll in Rockwood Park. At the NB Museum, the main thing I wanted to see was a temporary exhibit I had heard about. There are different approaches to visiting museums, ranging from trying to see everything on display in a systematic way to zeroing in on a particular exhibit (I have a vague idea for writing a post along these lines someday). I've seen the permanent exhibits at the NB Museum before, so it made sense to focus on the temporary one this time. "Conservation on Canvas" features paintings by Michael McEwing from over thirty different preserves owned by the NB Nature Trust.

The Nature Trust properties are spread around the province—albeit with the greatest number clustered in the south-west—and the paintings span the four seasons, so this art really captures the diversity of natural scenery in New Brunswick.

The following paintings (they were spread out in the exhibit, so I pasted some photos that I took together) are of four NB Nature Trust preserves in the Fredericton area: 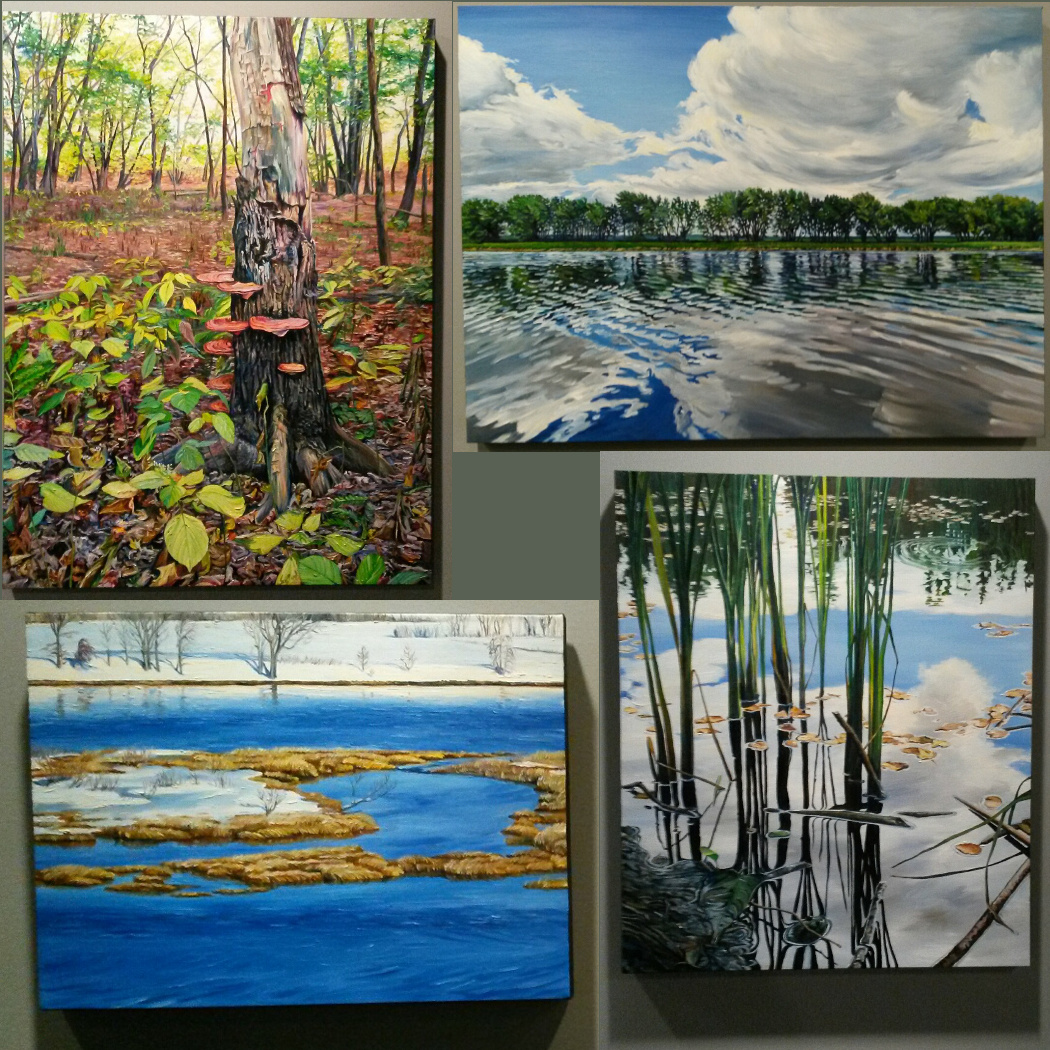 I think this sample of the exhibit gives a good sense of the style and talent of Mr. McEwing. Note that these images belong to the artist; I've included the compilation above only for the purposes of review and comment. Hopefully it provides motivation to go see the whole exhibit.

I've been to each of the preserves portrayed in the above paintings and I find them quite true to life. The painting from Sugar Island was one of my favourites from the whole exhibit as it reminds me of kayaking on the Saint John River in the summer. Based on some of the other paintings in this series, I'd also like to visit some other preserves around the province such as Caughey-Taylor, Connor Brothers, and Joseph Allain.

Before moving on to discuss the other art event I went to on the weekend, I'll quickly note that land trusts are probably the best-established element of free market environmentalism.

On Sunday, there was a long awaited grand opening of the new wing of the Beaverbrook Art Gallery, with a public open house. This event seemed to be really well attended and also very well organized: there were plenty of volunteers, temporary security guards to supplement the regular staff in keeping an eye on the art, a few performances, and even some workshops (I didn't attend any).

The new wing/pavilion looks great, so commendations are due to everyone involved in the planning, fundraising, and construction. It adds more display space to the gallery—including a special alcove for the Salvador Dali masterpiece Santiago El Grande (with some other works by Dali and also Alex Colville keeping it company)—as well as space for performances, a studio for an artist-in-residence, a teaching space, and a café. Strategically-placed windows give pleasant views of the river and the Green.

Here are a couple of photos that I took at the open house, showing a strings concert in one of the galleries and the exterior of the new pavilion: 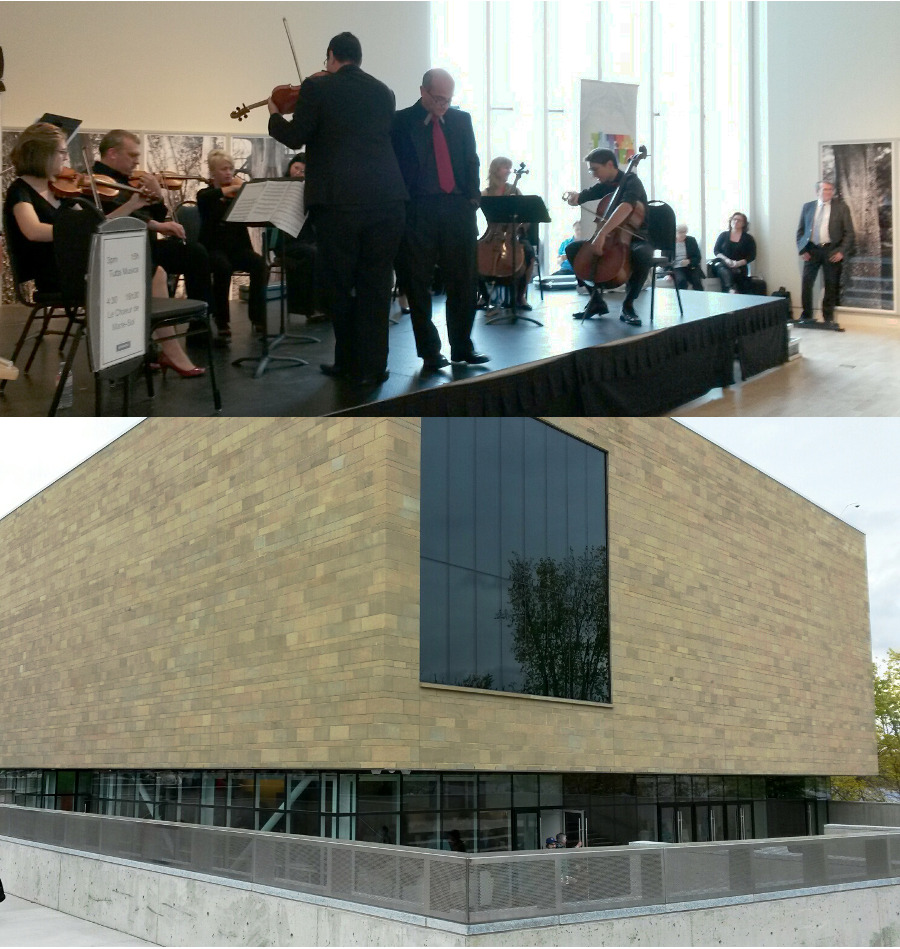 Something I thought was really cool (although I didn't get any) at the open house was that they had a one-day-only sale of limited-edition prints of some really unique works in their collection (e.g. a study of Churchill's hands by Graham Sutherland).

In addition to parts of the permanent collection that are on display, the Beaverbrook Art Gallery currently has an exhibit of nature photography by Marlene Creates. She has quite an eye for detail and has done neat series on signs, among other works that are on display.

Speaking of Dali's Santiago El Grande, I think I've previously mentioned that the structure in the background was inspired by the roof of a chapel in Toulouse. To mark the occasion of opening its new display alcove, I'm sharing this image where I superimposed the painting (as a semi-transparent layer with cut-outs) over a picture I took in that chapel: 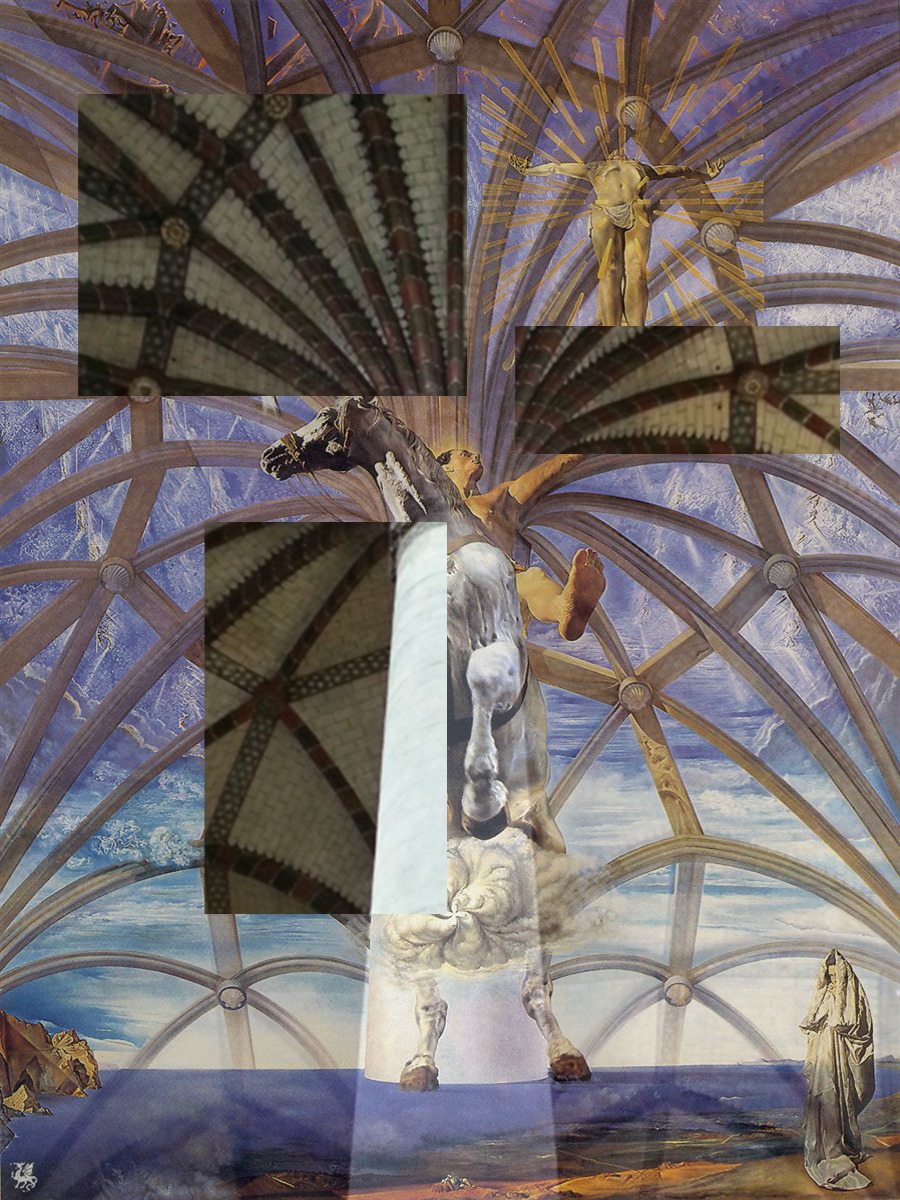 Finally, here are a couple of links to previous posts in which I've discussed the Beaverbrook Art Gallery.