On a recent weekend I had a day-long layover in Toronto (deliberately). I took the opportunity to check out a couple of museums there: the Aga Khan museum and the Art Gallery of Ontario.

The Aga Khan may be best known in Canada for controversy around gifting a vacation to the Prime Minister. However, he also established a museum in Toronto that exhibits some of the arts and culture of the Muslim world. A natural point of comparison is the Institut du monde arabe in Paris. That museum has a broader collection (it also stretches much further back in time—the Aga Khan Museum didn't have many artifacts from before 1000 A.D.) while the Aga Khan Museum has a more appealing building (see the photo below of its architecture).

Outside the museum there were some displays about the Aga Khan Historic Cities Programme, intended to revitalize some historic precincts in cities around the Muslim world. I didn't spend very long looking at them, but it sounds like an interesting initiative.

Inside the museum, some of the most plentiful artifacts were ceramic bowls of various styles. Some of them had nice calligraphy on them. I'd like to become more acquainted with different styles of Arabic calligraphy (I really like the appearance of square kufic although I didn't see any examples at the Aga Khan Museum). 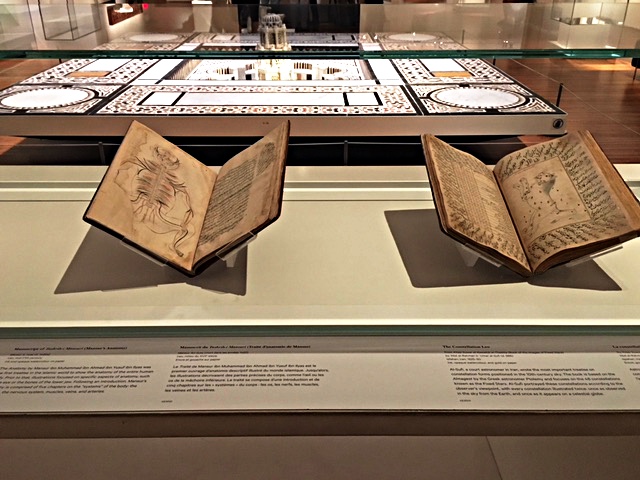 Other manuscripts included a copy of 1001 Nights (labelled as 101 Nights in English and Arabic, but 1001 in French) from 13th century Spain and a richly-illustrated copy of the Shahnameh (a number of pages were displayed individually to show some scenes of interest). I also learned about muraqqa, a kind of scrap-booking popular in the Ottoman, Safavid, and Mughal empires.

A market scene in a manuscript from late 16th century Pakistan, thought to have been illustrated for the Mughal emperor Akbar the Great, reminded me of this article about the history of trade in the Middle East. 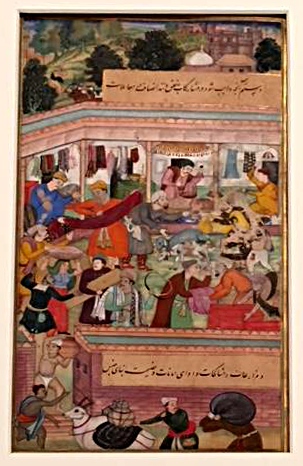 As a fan of tiles, this fountain from 16th century Syria was probably my favourite artifact in the museum. It would not have looked out of place in the Alhambra. 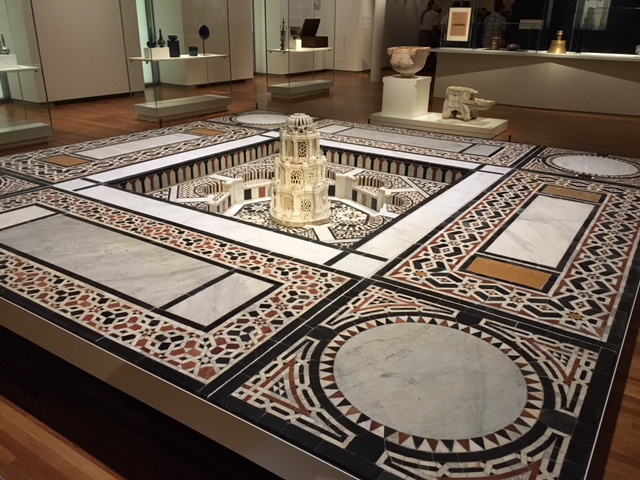 Here is the description of this fountain from the Aga Khan Museum:

Water plays an important role in Islamic architecture for its cooling effects and its aesthetics. Fountains were part of domestic interiors in Egypt and Syria from the time of the Mamluks to the Ottomans and after. They were restored as needed, and sometimes new fountains were assembled using pieces of fountains from different periods. The fountains were originally embedded in the floor.

Some final artifacts that are worth mentioning are a couple of intricate wooden doors and an astrolabe.

One thing I appreciated about the Aga Khan Museum was that the artifacts on display were presented according to their geographic origin. This added some helpful context. My impression was that Persia was the region best represented.

When I was at this museum there was also a temporary exhibit that I looked at briefly. It had a bunch of treasures from the Deccan Sultanates and Mughal Empire. These included a lot of jeweled weapons (e.g. Katar daggers); the whole exhibit was too opulent for my tastes.

The Art Gallery of Ontario (AGO) has a lot in common—especially when it comes to its permanent collection—with the National Gallery in Ottawa. Which is to say that it has a strong presence of works by Krieghoff, James Morrice, the Group of Seven and Tom Thomson (I've also seen a lot of their work at the McMichael Gallery), Emily Carr, and other well-known Canadian artists.

It would take multiple visits to properly take in everything at the AGO, so I'm just going to share some art that stood out.

There were a couple of full rooms dedicated to Cornelius Krieghoff's paintings. I love the detail and vitality of his work: 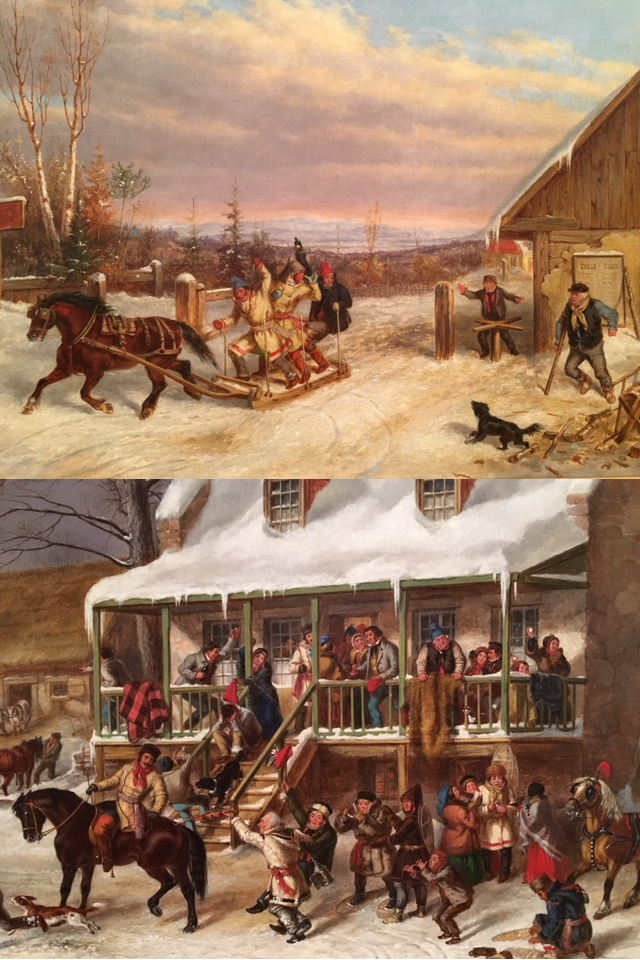 Lawren Harris also had a dedicated room or two at the AGO:

Here are some paintings by J.E.H. MacDonald and William Kurelek: 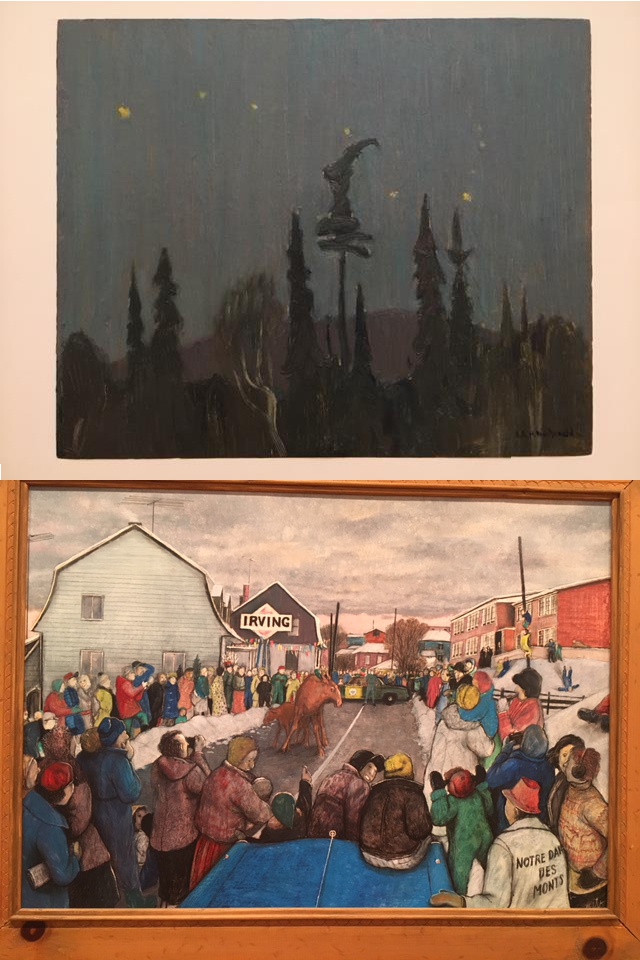 Because I like the poem, I appreciated this painting of the Lady of Shalott. One of MacDonald's few urban paintings (Tracks and Traffic, 1912) was also neat to see.

A big part of the AGO is the Thomson collection. This includes paintings, but also ship models (such as this one) and carved diptychs and prayer beads, among other things. I spent some time looking at an intricate carved prayer bead (a 3 – 4 cm diameter sphere that opens to show two Biblical dioramas) from 1500s Germany. The skill and labour that went into 14th century diptychs—and not in small number, considering how many were in a single museum that's not even in Europe—made me wonder if the late middle ages should be considered a golden age in Europe (by analogy to artifacts I had seen earlier that day from the Aga Khan Museum that reflect a similar level of development of material culture and are considered to come from an Islamic golden age).

The highlights of the AGO are definitely the works of some of the classic Canadian artists mentioned in the introductory paragraph above. In contrast to the milieu in which those works were produced, contemporary artists have a lot more institutional support; however, at least personally, it's hard to see a corresponding increase in the calibre of art being produced with the influx of grant money. I don't want to sound overly critical though, so before wrapping this post up, I'll mention a contemporary work that I liked: some horn-shaped sculptures by Rebecca Belmore that had been installed along the shore at some national parks (Banff, Pukaskwa, and Gros Morne) before being moved to the AGO. Here are some wave sounds that were recorded to accompany these sculptures.

Finally, there are some upcoming temporary exhibitions at the AGO that look like they would be worth seeing: Anthropocene (the artist behind Anthropocene had an exhibit at UNB this spring but I didn't make it out) and Impressionism in the Age of Industry.