In my posts about travelling to Copenhagen, Amsterdam, and Rotterdam, I mentioned that I'd be discussing some maritime museums I visited in a separate post. This is that post.

Seafaring has been an important part of Danish and Dutch history, and even their present economies. Consequently, both Denmark and the Netherlands have a number of museums dedicated to this history. I visited a couple of them in each country and thought it would be interesting to describe them all at the same time and draw some comparisons.

My favourite museum discussed below is the Viking Ship Museum in Roskilde (a venerable town that can be reached via a 25 minute train ride from Copenhagen). It is narrowly-focussed and experiential. The national maritime museum in Amsterdam takes a broader approach but also does an excellent job presenting history—and some future possibilities.

Of the museums covered here, this one stands out for having the most notable architecture. It was designed by the Bjarke Ingels Group to fit in an old dry dock so as not to block views of the Kronborg castle. As a result, the whole museum has the shape of a ship.

The maritime museum (Museet for Søfart) is only one of the things to see in Helsingør, so it makes a good destination for a day trip from Copenhagen (about 45 minutes away by train).

Here is a picture of the museum: 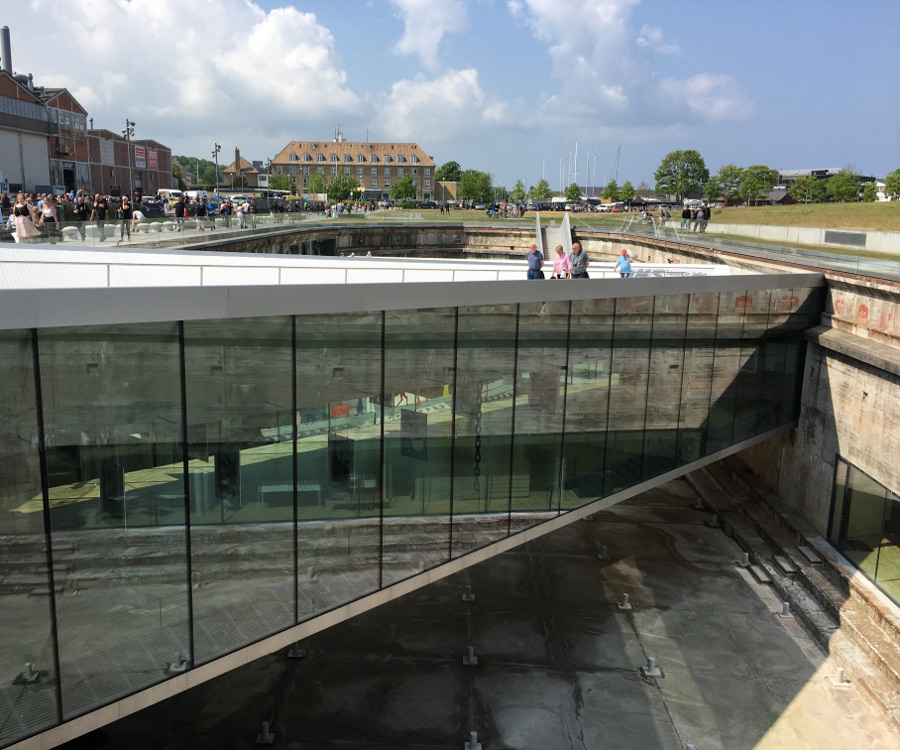 My favourite exhibits were a room filled with old navigational instruments, ship models (dispersed throughout the museum in semi-chronological order; reading the accompanying specifications revealed a definite trend toward larger capacities and smaller crews), and a temporary exhibit called the "Magic Box" about modern trade in shipping containers. Denmark has a prominent role in the modern shipping industry so this part of the museum was very informative.

One of the other navigational tools in their collection (not pictured) was a Polynesian stick chart. I've mentioned Polynesian navigation a couple of times before. I've also previously mentioned that I like seeing old sextants and astrolabes. And another museum I've been to that has cool ship models was the Armada museum in Madrid.

The Viking Ship Museum (Vikingeskibsmuseet) in Roskilde was built around five Viking-era ships that were recovered from the bottom of the fjord there. The whole museum revolves around presenting, preserving, researching, and interpreting this single discovery and as a result it has a lot of depth. The five ships (2 warships, 2 trading ships, and a fishing vessel if I recall correctly) were scuttled in the fjord almost 1000 years ago to block the most direct approach to Roskilde—allowing for more of a warning in case of an attack*—and the cold water preserved them very well.

*Roskilde was the capital at the time, and the museum had a diorama and play-by-play timeline of how a hypothetical attack from Oslo might have played out.

The museum has 3 parts: a building housing the preserved ships, along with interpretive plaques; a workshop area where people use tools of that era (down to details like rope-making) to build replicas of the ships; and a harbour that contains completed replicas. Here are photos from each of these zones:

The Viking Ship museum offers short excursions on the replica ships (the one in use when I went was a fishing or trading vessel, not the longship) they've built. The day I went was sunny with a light breeze, so it was very pleasant. We rowed out of the harbour then raised the sail. The experience (the feel of the oars and the sound and smell of the sail) is almost enough to make one want to get a small number of friends, a medium-sized ship, and a large axe and go seek fate or fortune.

The research the museum does includes analysis on the wood of the ships (to determine where and when they were built) as well as "experimental archaeology" (which I've mentioned in a different context here)—by building replicas they can acquire data on the amount of labour and resources needed to build one and by sailing them they can determine the crew requirements and the speeds that can be reached. The replica longship in their collection (30 m long by 3.8 m wide with a 1 m draught and 26 ton displacement) has made the crossing to Ireland as part of this research.

The interpretive plaques in the museum gave a lot of information about Vikings, including this note on weapon complements for their ships:

According to mid-11th-century Norwegian law, the standard weaponry on a warship had to consist of 1 bow and 24 arrows per thwart and a shield, a broad-axe, a sword and a spear per man.

Overall, this was a really impressive museum; the chance to go briefly sailing on one of the replicas was a superb experience.

Het Scheepvaartmuseum in Amsterdam is the largest museum on this list. As such, it has room for some diverse exhibits. Some of the notable ones were navigational instruments (pictured above), a 1648 map by Blaeu, a model and statistics of the modern Port of Amsterdam, marine paintings, and the whaling industry.

Here are a couple of the marine paintings in the museum's collection. The one on the left is by Van de Velde the Elder and the one on the right is by his son:

An especially interesting gallery told the story of the Dutch Golden Age. It was fitting to have that exhibit at the National Maritime Museum, since shipping (inland shipping on barges, international trade by the East India Company, naval power, and Amsterdam as a busy entrepot) was such an important contributor to Dutch power and prosperity at that time.

At the quay of the museum there's a replica of an East Indiaman ship. It has a length of 48 m and a beam of 11.5 m and 42 guns. It was fun to tour the decks, but it didn't impress me as much as the Viking ship replicas discussed above for some reason—perhaps because they're still sailed regularly whereas this replica remains in the harbour.

Another gallery promoted "game-changing" innovations from the Netherlands in the maritime space. These ranged from de Groot's concept of the oceans as international territory to an unmanned boat that captures garbage to clean up harbours. This gallery also had an art exhibit by Sjoerd Knibbeler called Fixed Flow. It consists of prints produced by exposing the wakes of 3d-printed ships onto photographic paper: 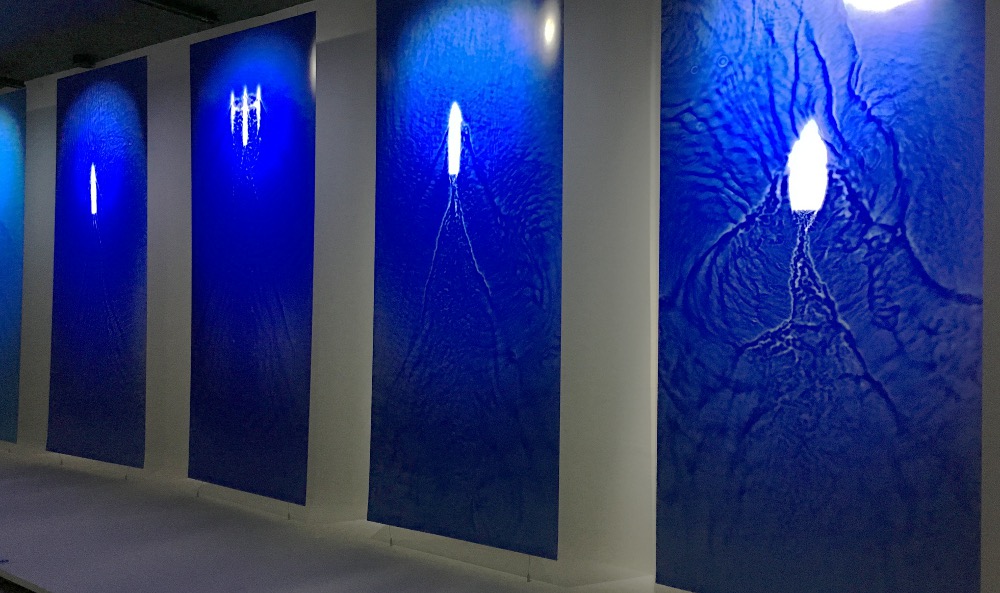 Waves and Beaches by Willard Bascom explains the importance of studying wakes:

Much of the power expended in propelling a ship goes into wave-making and anything that can be done to reduce these waves results in increased efficiency and is of direct economic importance. Consequently some of the greatest names of hydrodynamics are associated with the ship-wave problem, including Bernoulli, Lord Kelvin, Rankine, and the Froudes. (pp. 121 – 122)

Here is a video about this art exhibit:

This museum is featured in the national canon.

My visit to the Maritiem Museum Rotterdam was quite brief (around an hour). The exhibits I saw included one on houseboats (mainly in Dutch), the museum's "masterpiece" collection of maps, paintings, and ship models, and a really thoughtful exhibit about the capture of the last VOC fleet. The loss of these ships and their cargo contributed to the end of the Dutch East India Company (VOC). They were captured by the English; the Netherlands had been occupied by France at the time (during Napoleonic Wars, I think), so the English saw Dutch ships as suitable targets—but the Dutch returning from Asia were unaware of this and were taken by surprise off the coast of St. Helena. The exhibit was a good demonstration of how the same events can be perceived differently by different sides, because viewpoints of English and Dutch people who were involved were shown on the opposite sides of a set of banners:

Probably the highlight of this museum is its collection of old barges and other ships in the harbour outside the main building (which you can walk around without a ticket): 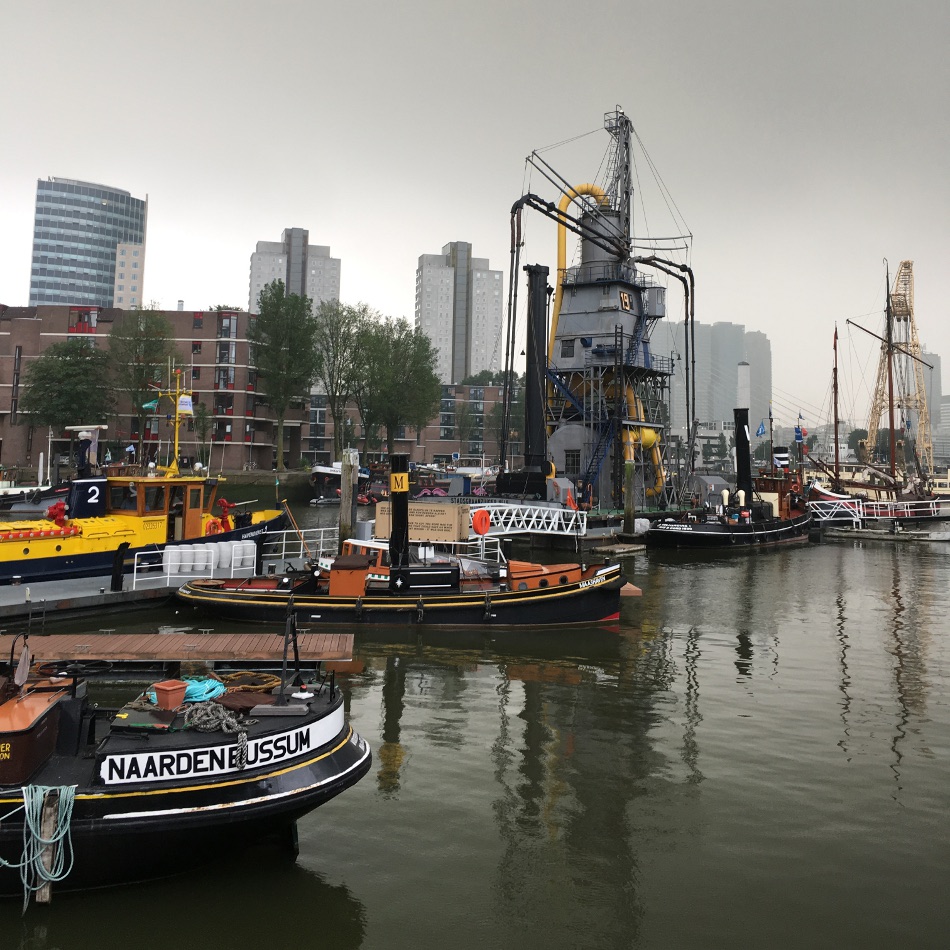 This museum also seemed to have a lot of activities for kids.

On my trip I passed through Hamburg and noticed that it also has a maritime museum, but I wasn't there long enough to visit it. Halifax also has one that I haven't been to for a long time, but might try to visit again to compare to these ones.

I'm planning to write one more post discussing things I did on this trip. It will be about biking in the Netherlands and ways the Dutch have dealt with living below sea level in places.